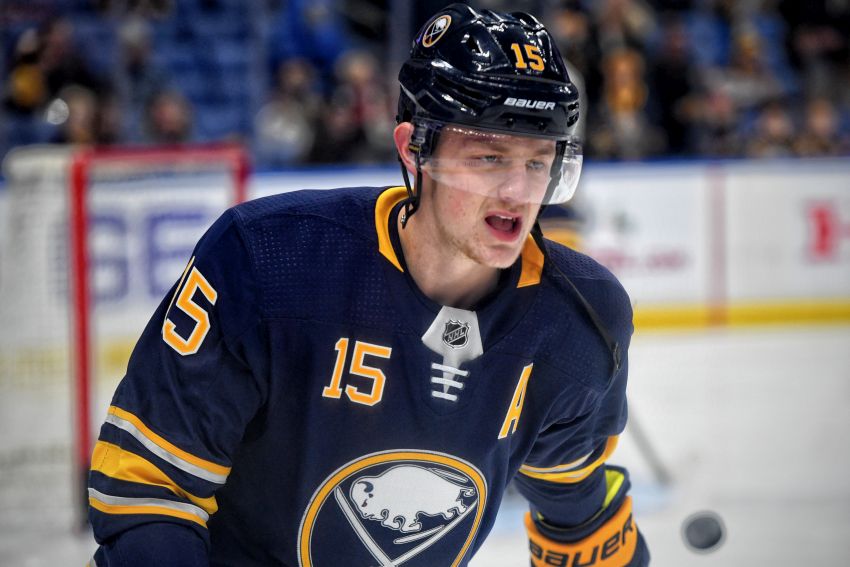 BUFFALO – Even by Sabres standards, their start in Thursday’s 4-3 win over the New York Islanders was bad.

The Sabres have consistently stumbled, even occasionally imploded, early in games this lost season, falling behind and generating little offense.

Unlike other outings, however, the Sabres kept the puck out of their net early Thursday. Still, they chased the Islanders most of the first period, getting hemmed in their zone.

During the rare times the Sabres possessed the puck, they couldn’t even pump a shot on goalie Jaroslav Halak, whose Islanders had allowed an average of 45 shots a game in their last five contests!

Finally, 7:41 into the first period center Jack Eichel’s shot from the right circle sailed by Halak. The Sabres had their first shot and goal.

Two shots, two goals for the Sabres, who got outshot 10-4 in the first period but ended it up 2-0.

“We get a couple goals there, we feel good about ourselves even though we maybe weren’t playing that well,” Eichel said. “It felt like they were in our zone the first 10 minutes, but we find a way to end the period up.”

Thanks to center Ryan O’Reilly’s power-play goal, the Sabres led 3-0 before the Islanders roared back, tying it with two third-period goals.

But winger Sam Reinhart put them back up at 15:46, ending a four-game losing streak (all at home) and securing the 1,000th home win in franchise history.

“I didn’t really like the way we started,” he said. “We got outshot pretty badly in the first period, but we found a way to get two goals in two shots. I just didn’t like the way we played tonight, even after a win. We gave up far too many chances to a team that likes to attack, rush.

“We got outchanced, we got outshot, and in saying that, we blew a two-goal lead in the third period and we find a way to win. That’s the positive thing.”

He added: “I’m not saying that I’m not happy the guys pulled it out, even after giving up a two-goal lead. … Overall, if you’re playing like that, you’re asking for trouble, especially going into Boston (on Saturday).”

At this point, though, any victory is huge for the Sabres. Unlike so many others times, they battled back and scored a pivotal goal.

“It was a pretty ugly one but those are the ones you kind of have to find a way to win on a consistent basis in this league,” Reinhart said.

Eichel, who assisted on Reinhart’s winner, was on the ice for the Islanders’ first two goals and off for tripping when Anders Lee tied it 14:33 into the third period.

“It was frustrating,” Eichel said. “Obviously … (I) felt like I needed to do something to help us get a spark there.”

Incredibly, the Islanders had allowed 30 or more shots in 20 straight games before Thursday. Reinhart said the Sabres, who sprinkled 22 shots on Halak, sat back too much late.

“That let them come at us with speed and skate around our zone relatively freely,” said Reinhart, who had three points and has compiled four goals and 13 points in his last 10 games. “We knew we had some jump earlier and we were able to find it and capitalize on that.”

Like so many nights here recently, the Sabres played before a crowd well under capacity. While the team announced 16,872 spectators, the actual crowd appeared to be around 10,000 or so.

“It’s frustrating because they’ve stuck with us for so long here,” he said. “It’s not been the best season in terms of wins and losses, and you really can’t blame them at this point. It’s not like we’re putting the best product on the ice.

Housley said the Sabres must earn the fans’ trust.

“We haven’t given them a lot to cheer about,” he said.