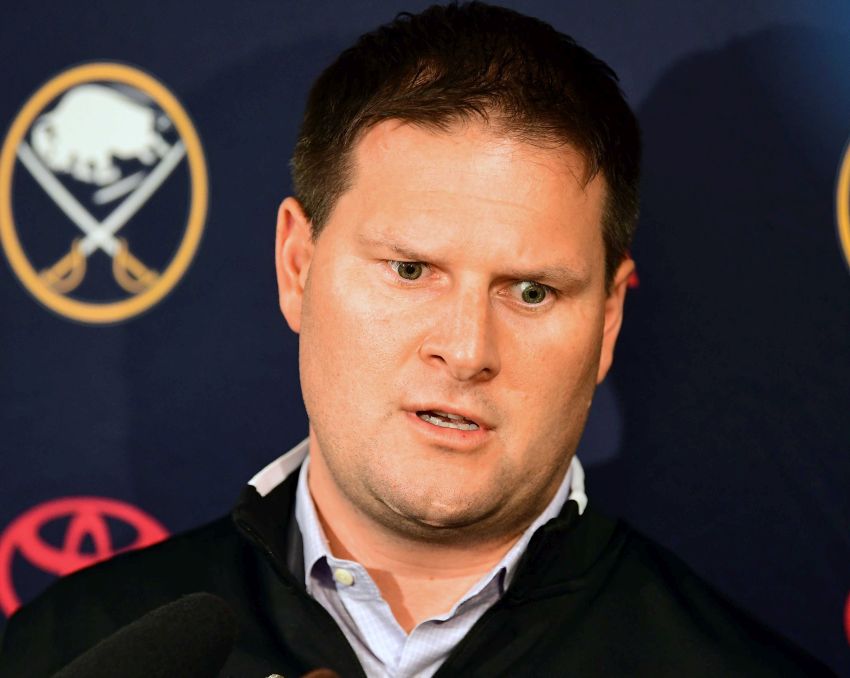 TORONTO – On Sunday night, Sabres general manager Jason Botterill made a significant trade for this season, sending a 2019 first-round pick and defense prospect Brendan Guhle to the Anaheim Ducks for defenseman Brandon Montour.

Think about that, the Sabres, a team seemingly in perpetual rebuilding mode, dealt futures for an established NHL player before today’s 3 p.m. trade deadline.

But for the first time since 2011-12, the Sabres are in the playoff chase at the deadline. They apparently don’t plan to dump assets this year.

Botterill’s move sends a strong message the 10th-place Sabres, who have suffered a stunning fall, dropping from first overall to out of a playoff spot, want to win this season.

The Sabres, who play the Maple Leafs tonight, trail the Carolina Hurricanes by six points for the Eastern Conference’s final playoff spot.

Botterill has never operated as a GM in this situation as the deadline approached. In his first season in charge a year ago, the Sabres hit rock bottom, finishing dead last. He simply traded Evander Kane, whose contract was set to expire, prior to the deadline.

For months, as the Sabres struggled this season, Botterill stayed quiet, making no notable moves.

Since then, they’ve earned the third-fewest points in the league, just 30.

The 6-foot, 193-pound Montour, 24, offers the Sabres immediate help. The UMass product has scored 16 goals and 63 points in 169 NHL games. He has compiled five goals and 25 points in 62 contests this season.

“Brandon is a young, offensive-minded defenseman who can play the up-tempo style we are looking to play,” Botterill said in a statement. “He’s a right-shot defenseman that brings additional playoff experience to our club.”

Montour, a second-round pick in 2014, 55th overall, recorded nine goals and 32 points, both career highs, in 80 games last season. This is his second full NHL campaign.

The Brantford, Ontario, native has one season and a $3.25 million salary cap hit left on his contract.

Montour’s presence creates a logjam on the blue line. Right now, the Sabres have eight healthy defensemen on the roster. Regular Marco Scandella is also hurt.

The Sabres could possibly deal defenseman Nathan Beaulieu, who requested a trade last month, to create space. But Beaulieu, 26, has recently started playing again after sitting out for long stretches as a healthy scratch.

Meanwhile, Guhle, once the Sabres’ top defense prospect, spent most of the past two seasons with the Rochester Americans. Guhle, 21, has played 23 NHL games, including two this season.

Still, the Sabres’ old regime drafted him in the second round in 2015, 51st overall. Botterill had no investment in Guhle, a youngster many expected would be in the NHL by now.

Two years ago, the Sabres needed Guhle’s puck-moving skills so badly they recalled him from junior during the season. Many thought he would bypass the AHL and jump right to the NHL.

This season, newcomer Lawrence Pilut jumped past Guhle on the depth chart.

Plenty of holdovers Botterill did not acquire are still in the organization. Perhaps he isn’t done reshaping the Sabres.

“We’ve had a lot of conversations going on,” Botterill said Wednesday. “Whether those things come to fruition over the next couple days, it’s always hard to predict. As I think we saw last year, sometimes you look at the draft and then things can move into July 1 and things can move into the summer. I can’t predict when it’s going to happen.”

The Sabres have signed goalie Adam Wilcox to a one-year, two-way contract, the team announced Sunday.

Wilcox, 26, has played with the Amerks this season on an AHL deal.

The Sabres placed him on waivers Sunday, something that accompanies signing a new contract.

Having only three healthy goalies in the organization under NHL contracts can be risky.

Wilcox played one game with the Sabres last season.