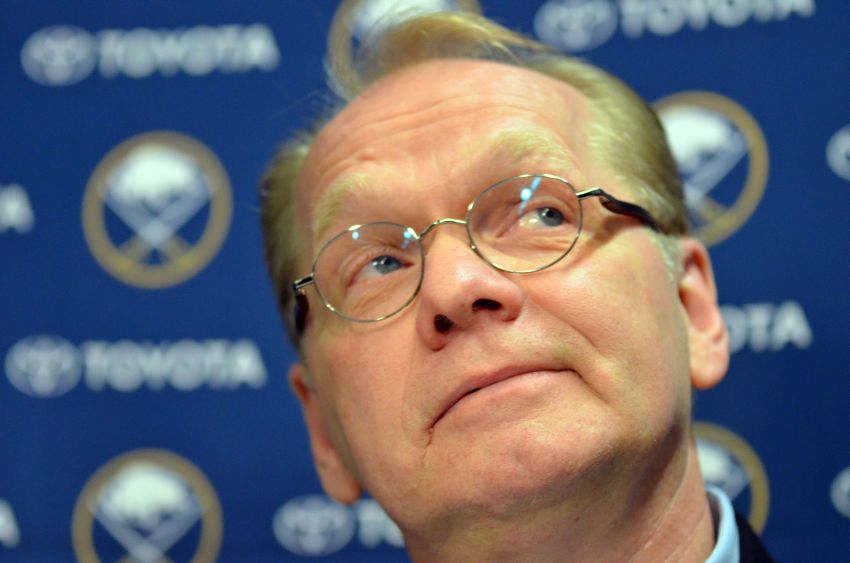 “We have gone with more determination in a very distinct direction, which is about the Stanley Cup,” Regier said Monday during a contentious and even bizarre 46-minute season-ending news conference inside the First Niagara Center. “So I feel good about it. I love the opportunity. I understand what we’re talking about here. I understand our fan base and I would like to think that people will give up some suffering in order to win a Stanley Cup.

President Ted Black was hammered on the Sabres’ decision to announce their 4 percent season-ticket increase on Friday, Fan Appreciation Night, and owner Terry Pegula’s availability to the media.

Black sparred with reporters, at one point telling one to “behave yourself professionally” and that he was showing his bias. Black later apologized.

The long session served as another reminder Pegula’s original plan – the one about winning the Stanley Cup in three years – is history after the Sabres’ 12th-place finish.

That process, Black said, started at the NHL Entry Draft in June. Regier, who’s staying on as GM, Black said, took it back to the 2012 trade deadline, when the Sabres traded veteran Paul Gaustad for a first-round draft choice.

Back then, Regier said the Sabres had an eye on the present and future. Now, it’s totally on the future.

They could have a long and arduous road ahead of them, so Regier’s preaching patience to a fan base that’s seen its team miss the playoffs four of the last six seasons and seven of the last 11.

“You satisfy yourself and the fan base with a playoff,” Regier said. “But you have to do more than that if you’re set on winning a championship.”

Regier, the team’s GM since 1997, called making the playoffs “an acceptable level around the league.”

“It’s just not the standard here, and I recognize I’m saying that in light of two missed playoffs,” he said.

It’s unclear whether that timeframe will include goalie Ryan Miller and winger Thomas Vanek, two franchise cornerstones. The stars each have one year left on their contracts.

Both are cognizant their long Buffalo careers could be ending. Vanek has said he doesn’t want to be part of a long rebuild. Miller, who played his 500th game Friday, seemed to be saying goodbye last week.

Regier said he and Pegula have spoken to Miller and Vanek.

“I would love to keep them here going forward,” Regier said. “It’s an unknown right now. They’re under contract for next season. We’ll do everything we can to make them a part of this. But we’ll have to see.”

The future of interim coach Ron Rolston, who took over for Lindy Ruff on Feb. 20, hasn’t been determined, Regier said. He plans to meet with Rolston, who went 15-11-5, over the next week or two.

Regier’s now operating under trying circumstances. In any other city, he probably would’ve been fired years ago, something Regier understands.

“I don’t take any of this for granted in any way, and I am extremely grateful, not just for this opportunity, for being here on a day like today,” Regier said. “I think this is great. The reality of it, if I didn’t have the confidence that, I, in the general manager’s position along with the people I work with could accomplish building a Stanley Cup winner, I wouldn’t be here.”

He added: “There’s unfinished business there. I have a lot more insight into an experience and I’ve learned a lot more in that process. I’m not an old man. My goal is to come to work every day learning something new.”