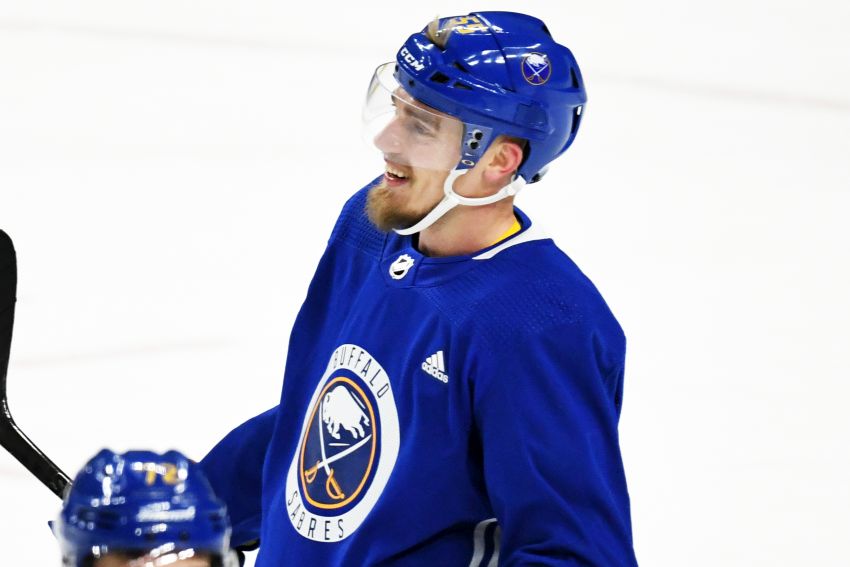 The chatter about Rasmus Ristolainen wanting out of Buffalo has ended. These days, the defenseman says he’s happy and excited to be with the Sabres.

“I enjoy being here right now,” Ristolainen said on a Zoom call Sunday. “The team looks good and ready to go and it’s going to be a very exciting year.”

Ristolainen, 26, has rarely spoken so optimistically. Prior to last season, in an interview with a Finnish TV station, he wouldn’t even commit to being at Buffalo’s training camp.

But Ristolainen showed up, and he quickly established a strong relationship with Ralph Krueger, his fifth coach since 2013-14, his rookie season.

On the ice, Ristolainen enjoyed a terrific comeback season, shaving his rating from a ghastly minus-41 to a career-best minus-2. Krueger and his staff managed his minutes and put him in better situations to succeed.

“I’ve said before, he’s probably the best coach I’ve had in my career, so I’m happy to be working with him (now) and in the future, too, hopefully.”

So how did the affable Krueger foster his relationship with Ristolainen? Having spent most of his playing and coaching career overseas, Krueger developed a unique understanding of the different European cultures.

He simply wanted to let Ristolainen, who often sounded beaten down by all the losing he has experienced, be himself.

“I feel that in the past it’s possible that people were trying to have Risto change for a culture that he wasn’t comfortable with rather than just being Risto,” Krueger said. “And that’s all we want is to express himself within his own culture and adapt, of course, and embrace the way we need to play.

“He’s very, very direct and honest in his communication,” Krueger said. “When he doesn’t like things, he puts it on the table, and that’s the culture we want in here from our leaders. And that also means making sure that he pushes his teammates and himself to do everything possible to win.

“We find him very coachable. His physical presence and his battle hunger is important for our group. We have a lot of skill, but we need that grit, we need that bite. He gives it to us. Above all, he is a pro in everything he does.”

Krueger said Ristolainen possesses “an immeasurable quality of competitiveness and passion for the game.”

“He really does everything he can in preparation,” he said.

The 6-foot-4, 221-pound Ristolainen tried to utilize the extra time the COVID-19 pandemic created to prepare for his eighth NHL season.

He said he tried to recover from the demanding season, forget about hockey and refresh his mind before he started working out again.

“I probably skated the most I have during the summer, so working on my skating, fitness on the ice, skating, shooting, puck handling,” he said of his offseason work. “Probably off the ice the main thing was speed and explosiveness.”

Not surprisingly, Ristolainen said the Sabres’ offseason moves “make me ever more excited.” Most notably, they added veteran center Eric Staal through a trade and signed winger Taylor Hall, the 2017-18 Hart Trophy winner, as a free agent.

While he hasn’t spoken much to Kevyn Adams, the Sabres’ fourth general manager since his rookie season, he said the Clarence native has impressed him.

“The few times we’ve talked, he seems (a) very good guy, very honest,” Ristolainen said. “I like the moves he’s made so far, so that tells me a lot about him, he wants to make the team better right away.”