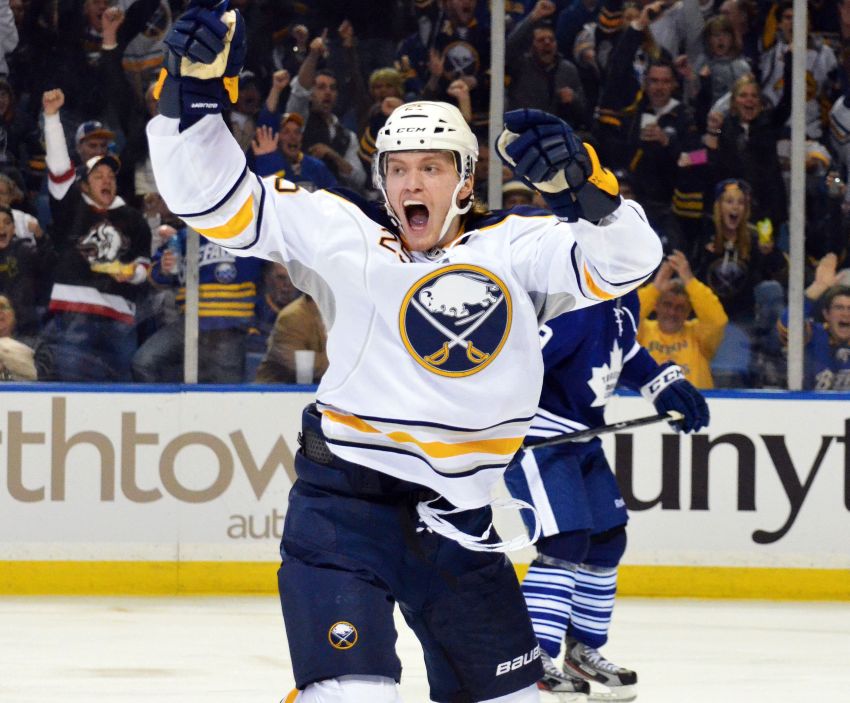 BUFFALO – Fifteen minutes after allowing the overtime winner in the Sabres’ shocking 4-3 loss to the Toronto Maple Leafs, Ryan Miller sat stewing in his stall inside the dressing room, staring straight ahead. The goalie still had his pads on. He barely moved.

His 29 saves had just bested the former Vezina Trophy winner Tuesday before 18,801 fans inside the First Niagara Center.

On a night the Sabres carried the much of the play and received a huge boost from rookie Mikhail Grigorenko’s first NHL goal, they still couldn’t down the Leafs, a team many have pegged as one of the Eastern Conference’s worst.

With a shootout appearing imminent, John-Michael Liles passed the puck ahead to Matt Frattin through the neutral zone. Frattin couldn’t control the puck into the Sabres zone, but he chipped it past Jordan Leopold before getting around the defenseman in the left circle.

Miller left too much room on his right side and Frattin shot high inside the near post with two seconds left.

“I let the guys down on that one,” Miller said following the Sabres’ fourth straight loss. “I just made a stupid decision. That play made a hole. I didn’t really take anything away there.”

Just six games into the season, the Sabres are already finding solace in earning a consolation point.

“We put a lot of work into that game,” Sabres coach Lindy Ruff said. “I thought we dominated the possession game for most of the night. We had a lot of great looks. I thought we really skated well. It’s a tough way. But I thought just to come back, get the point (was good).”

The Sabres lost more than a point. Patrick Kaleta left 17:34 into the first period and went to the hospital as a precaution after turning as Mike Brown hit him into the boards.

Ruff said Kaleta hurt his neck and was X-rayed before leaving. He had no update. The aggressive winger has a long history of head and neck injuries.

“I looked at it. I thought he was sideways,” Ruff said about Kaleta. “Some of the obligation is on the player. I didn’t think he was defenseless. It’s a tough area. It’s not a blatant run-a-guy-from-behind.”

Miller, meanwhile, struggled while making 20 saves. He had been superb through five games, looking as sharp as ever. But he hiccupped early Tuesday when Nazem Kadri’s pedestrian shot sailed by his glove and hit the crossbar. Jay McClement knocked the bounce in at 9:25.

“Just missed it,” Miller said. “It was stupid.”

Still, the Sabres responded, appearing to seize all the momentum after Grigorenko tied the game at 3 7:10 into the third period, backhanding Weber’s point shot between Reimer’s legs from the slot.

Grigorenko then went down on one knee and pumped his fist before Marcus Foligno tackled him.

“I didn’t even know it was Foligno,” Grigorenko said. “I was real happy.”

Weber added: “I told him going into the third period that it’s going to be a dirty one, his first one. It might go in off a pant leg or it might be a scrounge in front. It ended up being true. I couldn’t be happier for the kid.”

Grigorenko’s special day had gone bust. Hours after the Sabres told the Russian he would be staying in the NHL and not going back to junior, he was stuck on the bench. The team’s top prospect was on the ice for the Leafs’ first three goals, so Ruff sat him the final 13 minutes of the second period.

“I was just trying to forget those moments and come back in the game,” Grigorenko said. “I was just waiting for a chance. I had a lot of thoughts there.”

Ruff added: “It’s a little up and down but great to see him score a goal. That was the moment of great enthusiasm in the game when he scored. It was great to see. I tried to spot him a little bit of time.”

Grigorenko partaking in the shootout could’ve created a magical ending. It never got that far, though.

“I thought I had the stick tied up but evidently not,” Leopold said about Frattin’s winner. “We did a lot of good things in that game. We probably deserved better. But we ended up getting one point. That’s a point we need.”

Jason Pominville’s power-play goal and Andrej Sekera’s nifty pinch from the point put the Sabres up 2-1 before Cody Franson tied it 6:21 into the second period.

The Sabres had beaten the Leafs 11 of their last 12 meetings here.