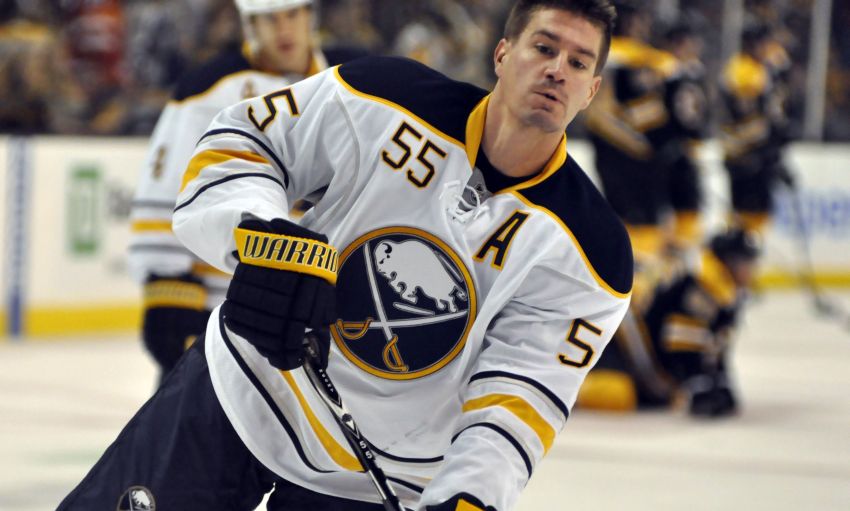 BUFFALO – Jochen Hecht said when the symptoms of another concussion began hitting him following the morning skate Jan. 24 in New Jersey, he lost it, he “was gone.”

The German’s third head injury in 10 months left him fearing for his career.

“I cried. I didn’t know what’s going to happen,” the longest-tenured Sabre recalled Monday, his eyes welling up with tears during what could’ve been his farewell chat with the Buffalo media. “It was tough dealing with it, especially hearing from some of the other guys that went through it.”

Today, the 34-year-old said he’s “in a good place.” He spent the final weeks of the season practicing. If the Sabres had made the playoffs, Hecht wasn’t sure about a return date. He plans to take his neuro-psych test this week. Passing it means complete on-ice clearance.

“I had a lot of fun out there with the boys again being out there,” Hecht said inside the First Niagara Center as the Sabres cleaned out their lockers. “Hopefully, I can do that again next year.”

It’s unclear if Hecht will return for a 10th year with the Sabres. His four-year, $14.1 million contract is about to expire, making him an unrestricted free agent. Hecht wants to play a 14th NHL season, preferably in Buffalo.

“I would like to play,” Hecht said. “My family likes it here. My kids love it here. It would be great to come back for another year and get this team in the playoffs.”

But Hecht understands teams could view him as damaged goods. He suffered a concussion in March 2011, tried playing briefly and then missed the rest of the regular season, only returning for the playoff finale (his lone postseason appearance in five years).

Hecht’s collision with Shaone Morrisonn early in training camp concussed him again. He returned in November after experiencing some setbacks. Then Hecht took a hit from T.J. Oshie on Jan. 21 in St. Louis.

Hecht played just 22 times this season, compiling four goals and eight points. If the Sabres bring him back, it would likely be a one-year deal for short money. He turns 35 on June 21.

“Obviously, teams will talk about (the concussions) … know that I didn’t play toward the end,” Hecht said. “It’s going to be a long healing period. I feel great. I’m looking forward now to next season.”

Hecht understands a risk could accompany playing another season. He’s not fretting right now, though.

“It’s always something you think about, especially right away when it happened,” Hecht said. “A lot of thoughts (are) going through your head, ‘What if? What if?’ Those are things that cleared. I’m feeling good since a month and a half. No issues, no setbacks.

“There’s no doubt in my mind I can recover from this and play another 82-(game) season.”

Hecht quickly became one of the Sabres’ top forwards after they acquired him from Edmonton for two draft picks at the 2002 NHL Entry Draft.

Hecht’s play dipped in recent years, however, and he wasn’t the steady two-way threat he had been for so long.

He ranks the surprising run to the 2006 Eastern Conference final and all the friends he and his family have made as his favorite memories here.

“The team that we had in place that year was something special,” Hecht said. “The other thing, we made a lot of friends here. My kids grew up here. My son is turning 9 this year. He grew up in Buffalo, went to school. My daughter is turning 7, same thing – big memories, big part of our life.”

This city is another home; a place Hecht’s children don’t want to leave.

“The kids during the summer when we’re at home, they always ask, ‘When are we going to our real home?’ And they mean Buffalo,” Hecht said. “So it’s home for them and home for us, too.”

Sabres coach Lindy Ruff has turned down an invitation to lead Team Canada at the upcoming world championship in Finland, according to TSN.ca.

Ruff coached the Canadians to a silver medal at the 2009 tournament, helping him earn an assistant coaching job and gold medal at the 2010 Vancouver Olympics.

The tournament begins next month in Finland.

Sabres center Tyler Ennis couldn’t accept a Canadian invite because of an undisclosed injury, the Canadian Press’ Chris Johnston reported. Ennis was hopeful Monday about possibly playing in the tournament.