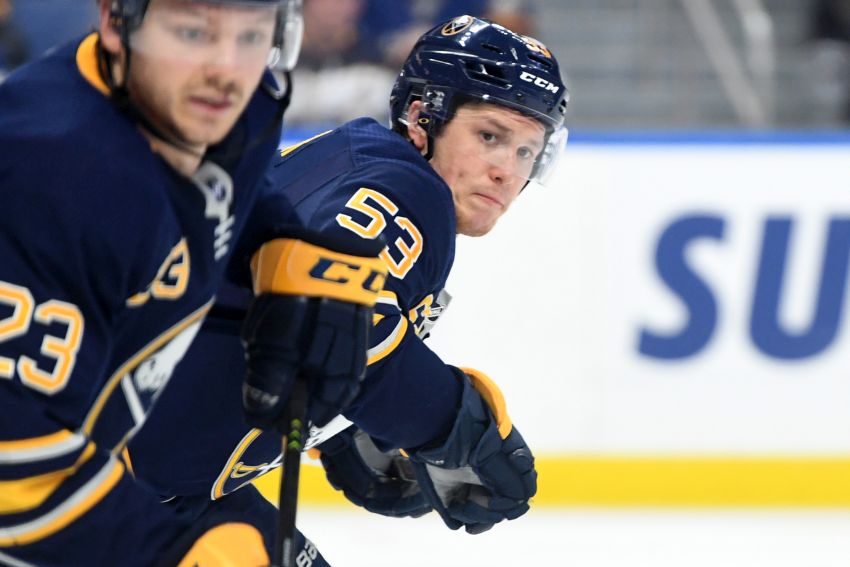 BUFFALO – Jeff Skinner tries to deflect credit for his recent scoring barrage. After all, the slick Sabres winger likes to point out, he has a terrific center in Jack Eichel and goals result from the players operating as a five-man unit.

“The line’s played well, the team’s played well,” Skinner said Thursday inside KeyBank Center. “You’re not going to be able to score unless all five guys are contributing. I think we’ve had that the last little while. I’ve sort of been on the right end.”

Certainly, those things help. But the biggest factor in one of the greatest goal-scoring runs in Sabres history, of course, is Skinner’s own talent.

Skinner, 26, showcases a tenacity few NHL players possess, relentlessly forechecking and backchecking. And despite his stature – the Sabres list him at 5-foot-11 – he consistently fights for position around the net, the so-called dirty area.

There’s a common theme in the 13 goals Skinner has scored through 18 games this season.

“You look at all of his goals, they’re all around the net,” said Sabres winger Jason Pominville, Skinner’s linemate earlier this season. “I don’t know if he’s scored any off shots from further out.”

Skinner, a three-time 30-goal scorer, can be dynamic around the net and deep in the opponent’s zone.

“He can be strong on his feet down low,” coach Phil Housley said after the Sabres prepared for tonight’s road tilt against the Winnipeg Jets. “He’s tough to get off the puck, he’s tough down low, he’s tough to play against and he has a knack for finding that open area. Jack’s done a really good job of finding him.

How special is the season Skinner has compiled so far? He has scored all of his goals in the last 14 contests. At his current pace, he would compile 59 goals over a full campaign.

A production bump from Skinner, who scored a career-high 37 goals in 2016-17, isn’t too surprising. After the Sabres acquired him from the Carolina Hurricanes on Aug. 2, many observers felt Eichel could help elevate Skinner to a new level.

“He’s one of the of the top centermen in the league,” Skinner said. “He kind of dominates the play out there, he draws so much coverage and opens up so much space for everyone on the ice.”

He added: “When you get one of the top centermen in the league, as a winger, it’s not going to hurt you.”

“I just think that’s sort of the way I have to play to be successful,” Skinner said. “I don’t know if you want to call it a style. … I’m not going to blow by someone, I’m not going to overpower a goalie with my shot like some of the other top scorers in the league.

“For me, I think you try to find different ways to be successful and produce.”

How long Skinner can keep producing in Buffalo is unknown. He will be an unrestricted free agent following the season and could command a long-term contract worth more than $7 million a year.

Right now, Skinner, who said his camp hasn’t had any extension talks with the Sabres, can’t avoid questions about his future.

“The more it gets talked about, the more you sort of have to answer questions,” Skinner said. “For me, I think you just focus on playing. It’s sort of been my mindset playing here. It’s been kind of easy, I think, especially so far, trying to adjust to a new situation, new teammates, new community.

“I think there’s a lot going on. You don’t have to sort of focus on other things that are out of your control.”