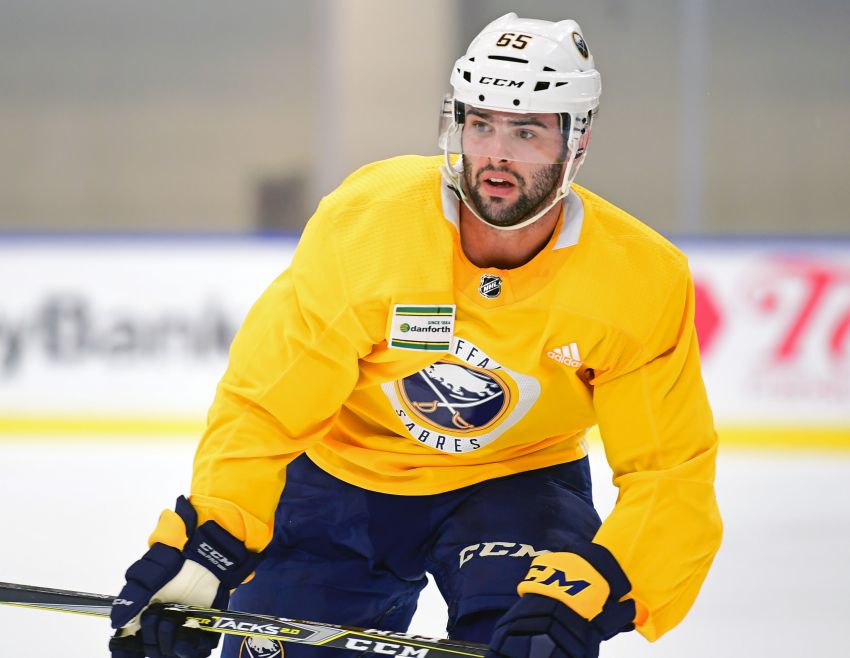 BUFFALO – As a Harvard graduate, Sabres prospect Colin Blackwell hears it all the time.

“Especially when you don’t have a job come Sept. 1,” the center said Saturday prior to registering an assist in the Sabres’ entertaining 7-4 win against the Boston Bruins in the Prospects Challenge.

Blackwell, 24, is often encouraged to look for work outside of hockey. He studied government and physiology at the prestigious university.

Right now, he could earn a heck of a lot more money utilizing his degree.

But Blackwell, a late invite to Sabres rookie camp, wants to keep chasing his dream. An uncertain summer in which he hasn’t signed a contract for the 2017-18 season won’t discouraged him.

“I’ve always learned that being patient, good things will happen and something will pop up,” Blackwell said. “I think the only thing that I can do – and it’s kind of the hardest thing for an athlete – is kind of believe in yourself. Confidence is everything.

“I think once I kind of get the opportunity to show my stuff, I’ll be good to go.”

Blackwell showcased his stuff Friday in the Sabres’ 4-3 overtime loss to the New Jersey Devils, scoring two goals in the opener.

“I heard some good things about him,” Taylor said. “But you don’t know until you play a game, so he really impressed.”

“I’m a little bit smaller than some of the guys out there, but I’ve got a big chip on my shoulder. I play a little bit heavier game,” he said. “I like to kind of get pucks down low and be that energy guy that kind of gets the boys going.”

The Sharks parted ways with Blackwell after just one season in which he scored four goals and 11 points in 56 AHL games.

“If you look at my stat line from last year, it doesn’t necessarily reflect kind of the player that I am,” the Massachusetts native said. “So it’s an opportunity for me to kind of come here in front of some fresh eyes, fresh faces.”

His summer, of course, has been filled with uncertainty waiting for a new gig.

“It’s kind of one of those things where there’s that big question and a gray area where there’s an unknown, where a lot of guys might’ve been signed by now,” Blackwell said.

Finally, the Sabres offered a spot in their rookie camp about a week ago. They called late because forward prospect Sean Malone, a West Seneca native, was recently injured.

“It was a no-brainer for me,” Blackwell said.

“He was the first one that I called,” Blackwell said.

Blackwell said an invitation to the Sabres’ main training camp is “definitely up in the air.” If he keeps impressing, it might materialize. Perhaps he could land a job with the AHL Rochester Americans.

“It’s one of those things I know it’s going to work out in the end,” Blackwell said of his career. “That’s kind of why I’m here. I kind of get a fresh start.”

Fasching scored twice for the Sabres, opening the goal barrage on the power play and closing it into an empty net. Bailey, Smith, Brendan Guhle, Nick Baptiste and Vaclav Karabacek also scored for the Sabres.

After Fasching leveled Emil Johansson in the third period, the contest got chippy, with a string of scrums and a fight. The Bruins took six third-period penalties.

The Sabres announced prior to the game winger Alexander Nylander, the eighth overall pick in 2016, would miss of the rest of the tournament (lower body) for precautionary reasons.

The Sabres expect Nylander back for training camp later this week.