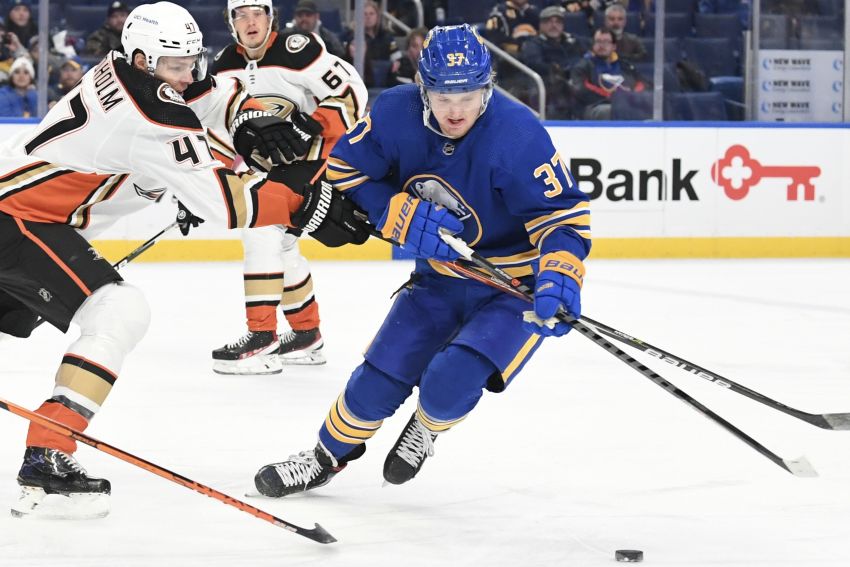 BUFFALO – When Don Granato took over the Sabres on interim basis 10 months ago, he said he treated the job like it would be his in the future.

So in his first days, Granato thrust some young players who had been getting scratched or skating short minutes down the lineup – centers Casey Mittelstadt and Tage Thompson, for example – into prominent roles.

Granato, of course, knew the Sabres would be trading or losing their established talent as they began rebuilding again. If they wanted to reverse course after years of losing, their youngsters had to seize starring roles.

“It was really important to power these guys (and) to get them to grab a hold of that power and feel like they could fill those slots as bonafide first-line or second-line NHL players or first-pairing D,” Granato said Monday inside KeyBank Center.

Fast forward to today, and Mittelstadt and Thompson, both of whom finished last season brimming with confidence, are two of the Sabres’ top guns.

Meanwhile, Sabres defenseman Rasmus Dahlin, who regressed mightily in the months before Granato took over, has morphed into an NHL All-Star.

Some of the Sabres’ other top young players – center Dylan Cozens and defensemen Jacob Bryson and Henri Jokiharju, to name a few – have also entrenched themselves in the lineup this season.

The consistent development their young players have showcased hasn’t bumped the Sabres up the standings much. Exactly halfway through the season, they’ve won just 13 of their 41 games entering tonight’s road contest against the Ottawa Senators.

Still, the growth Granato has seen this season excites him. Throughout all the adversity – the Sabres have been ravaged by injuries – and losing, he believes the team’s young core has plowed ahead and kept growing.

“You’re always close, close, close and then it turns and everything becomes easy,” Granato said. “We’re not to that point yet but we’re going to get there. I think the guys have shown that, to me. So that’s what I’m happy for most, the psychology of it.”

He said the players haven’t given the coaching staff any reason to panic.

“You thrust that many young players with limited experience into this situation, they – everybody says the buzzword – lose confidence,” Granato said. “Our guys have not lost confidence. They’ve actually, it’s been fuel for them. It’s enhanced their belief system – in one another, in what we’re doing and where we’re going. So that is what I’ve really like the most, is continual forward progress.”

Some prospects the Sabres recently recalled from the Rochester Americans should help enhance that progress. They’ve quickly started complementing the more seasoned members of the young core.

Center Peyton Krebs scored his first two NHL goals in the Saturday afternoon’s 6-3 win over the Philadelphia Flyers. Winger Jack Quinn recorded his first goal and assist in Thursday’s 5-4 loss to the Dallas Stars. Defenseman Mattias Samuelsson led the Sabres in ice time in his second appearance this season.

“We’re not winning games to a level anybody likes,” Granato said following Saturday’s victory. “But my confidence that we’re gonna win games is through guys like Peyton. Through guys like Jack Quinn and Dylan Cozens. Through Dahlin. I mean, these young guys, you just know. You just see every day how much better they’re gonna get.

“They’re dominant in moments and those moments are going to become more frequent. It’s gonna happen. We’re gonna keep supporting them to that end and it’s gonna happen, and we know it.”

The tightness of the group also encourages Granato and others.

“This is definitely the closest team I’ve had in years – on the ice, off the ice,” said winger Zemgus Girgensons, the longest-tenure Sabre. “I think that just transfers on the ice. Guys are willing to stick up for each other. My teammate will always have my back and I’ll have his.”

The Sabres have stuck up for each other on the ice all season, dropping the gloves or doing whatever was needed. In prior seasons, they’ve often looked soft.

Injuries and illnesses have forced Granato to flip players all over the lineup. The Sabres have already used 38 players this season. Mittelstadt and Girgensons are set to return from injuries tonight, but they still have nine players sidelined.

“I want to see us get as healthy as we can,” Sabres winger Kyle Okposo said of the second half of the season. “I don’t think that we’ve played a game with a full lineup other than the first half of the first game. … It’s going to be nice to get Casey back. He adds a lot to our group and just the dynamic of the room.

“So I think that if we can get back to health and I like our group, I like our team, I like the way that certain guys are really starting to push.”