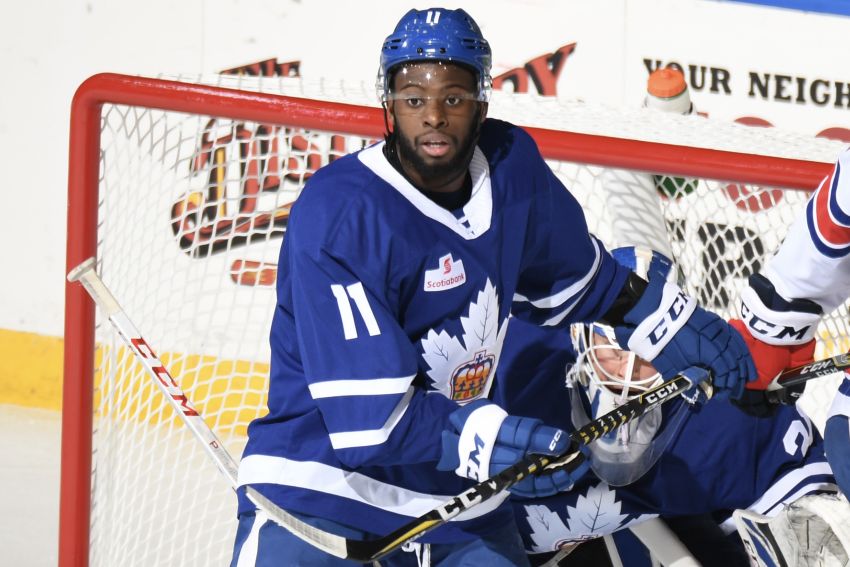 Jordan Subban, shown here with the Toronto Marlies in 2018-19, experienced a racial taunt in the ECHL on Saturday. ©2022, Micheline Veluvolu, Rochester Americans

BUFFALO – Kyle Okposo exhaled before answering the question. For the veteran winger, watching Jordan Subban, a defenseman for the ECHL’s South Carolina Stingrays, endure an alleged racial taunt in a game Saturday hit close to home.

“I’ve been through that before, I’ve had that feeling, and it’s not a good one,” Okposo, the first Black player to skate for the University of Minnesota, said Monday inside KeyBank Center. “And I can understand the rage that he displayed after it. Like, it’s something that cuts you to the core, for sure.”

According to a tweet from Subban, in overtime of the Stingray’s game in Jacksonville, he challenged Jacob Panetta, a defenseman for the Icemen, to fight. Panetta then allegedly made a racial gesture to Subban, who is Black.

“(Panetta) was too much of a coward to fight me and as soon as I began to turn my back he started making monkey gestures at me so I punched him in the face multiple times and he turtled like the coward he is,” Subban tweeted.

The Icemen have released Panetta and the ECHL has suspended him indefinitely. In a video Panetta posted on his Twitter account, he apologized to Subban, his family and anyone hurt by what he did. He said he “did a tough guy, bodybuilder-like gesture” toward Subban and his actions weren’t racially motivated.

“However unintentional my actions were, I acknowledge the impact of my gesture and will commit to better understanding the impact going forward,” Panetta said.

Panetta was the second minor league hockey player suspended in three days for a taunt. The AHL on Friday suspended San Jose Barracuda forward Krystof Hrabik 30 games “as a consequence of a racial gesture” directed at Tuscon Roadrunners forward Boko Imama, who is Black.

“As somebody that’s gone through it myself, it’s sad, it’s really sad. I hope that we can start to continue to move forward as a society. I think there’s obviously been steps taken, but it’s not going to change overnight. We need to continue to learn how to treat people with respect, unfortunately. But we have to move forward in this.”

“It is sad, disturbing,” Granato said of what Jordan Subban experienced. “I do believe that the rallying of people in unfortunate instances that happen is really inspiring and motivating and influential, very positive, influential. I think from a league standpoint, from a hockey standpoint … there’s issues that have to be dealt with but it’s a reflection of the person or the people. I think the sport is healthy in response, is healthy in the fact they care and we all want to do the right things. It’s learning how to do the right things better I think is what we’re all as a society going through and a sport.

“But it’s unfortunate that incidents happen and I guess you hope for, in this sake, obviously Malcolm and his family, that they can get through it, feel the love, support from so many people in hockey are really good people and don’t have any time a day for this thing.”

Granato said he had a hard time sleeping Sunday night after watching the Buffalo Bills’ dramatic 42-36 overtime loss to the Kansas City Chiefs in the AFC divisional playoff game.

Okposo, meanwhile, said his voice was hoarse Monday because he and his family were so into the game.

The teams combined for a stunning 25 points in the final 1 minutes, 54 seconds of the fourth quarter.

“That last three minutes we cheering, high-fiving, just like everything,” said Okposo, whose Sabres play a road game tonight against the Ottawa Senators. “And then down and then back up again and down. It was hard to see the result because you just saw how good of a football game that was and how much the Bills mean to the city.”

Okposo, who grew up in Minnesota, has made his permanent home in Clarence for a few years.

“My house, strictly Bills fans now,” he said. “I was crushed. Those guys had some adversity throughout the season and I think they were better for it. You hope it’s one of those things where they’re just learning lessons, they’re going to learn how to win. They’re right there.