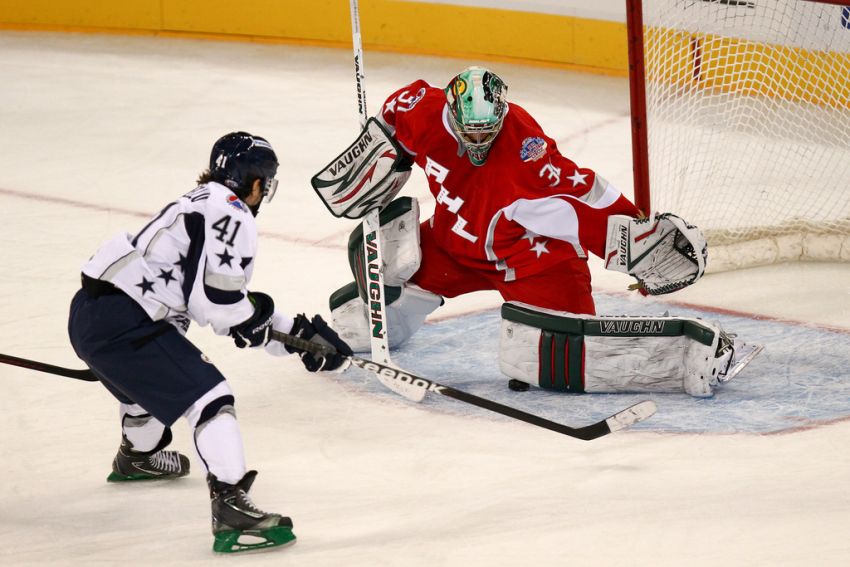 With Niklas Backstrom entrenched as the upstart Wild’s No. 1 goalie, there simply wasn’t room for everyone.

Still, when the Wild yanked him from the ice during the team’s morning skate Wednesday, Hackett “was pretty shocked,” he said.

“It just caught me off guard, I guess,” Hackett said by phone Monday.

The Wild had dealt Hackett to the Sabres with forward prospect Johan Larsson and two draft picks for captain Jason Pominville, arguably the deadline’s biggest trade.

“For me, it’s nice,” said Hackett, a London, Ont., native. “I’m closer to home. My family can come watch more games. It’s a fresh start, and hopefully it’s good for me.”

But Hackett has left one crowded crease for another.

Ryan Miller and Jhonas Enroth have been the Sabres’ two goalies for almost two full seasons.

In Rochester, Hackett, who played 159 total AHL games with Houston in the last three seasons, is now the backup behind Williamsville native David Leggio, one of the league’s best.

“I think we probably have two of the best goalies in the American League down there now,” interim Sabres coach Ron Rolston said last week.

The two goalies have spoken briefly.

Hackett, 6-foot-3 and 173 pounds, dazzled in his Amerks debut Sunday, stopping 39 shots in a 3-2 shootout win in Albany.

“I wanted to show the team they had made the right choice to pick me up,” said Hackett, who acknowledged he was nervous. “It was just a fun experience.”

Hackett has plenty of professional experience, including 13 NHL games.

He played 24 times as a rookie during Houston’s run to the 2011 Calder Cup final.

“The next year I felt more comfortable with my game in the AHL,” Hackett said.

“I’ve played a lot of games in the last three years,” Hackett said. “I feel like I’ve adjusted pretty well to this league and proven myself a little bit.”

Hackett began proving himself against professional competition years ago, when he would spell his uncle, former NHL goalie Jeff Hackett, on the ice during summer training sessions.

“When he’d need a breather, I’d jump in there and take shots from the pro guys,” Matt Hackett said. “So it was good for me.”

Jeff Hackett, who played 500 NHL games over 16 seasons, still teaches his nephew. They get together for sessions about 10 times each August.

“It’ll be just one-on-one,” said Matt Hackett, who lived in one of his uncle’s houses last summer. “He’s always looking at parts of my game that I can improve. It’s not always big things and more. But there’s always something that I can work on, and he’s always giving me a hard time about that stuff.”

The Sabres, who face the Jets tonight in Winnipeg, had Monday off.

2 thoughts on “Goalie prospect Hackett upbeat about future with Sabres”