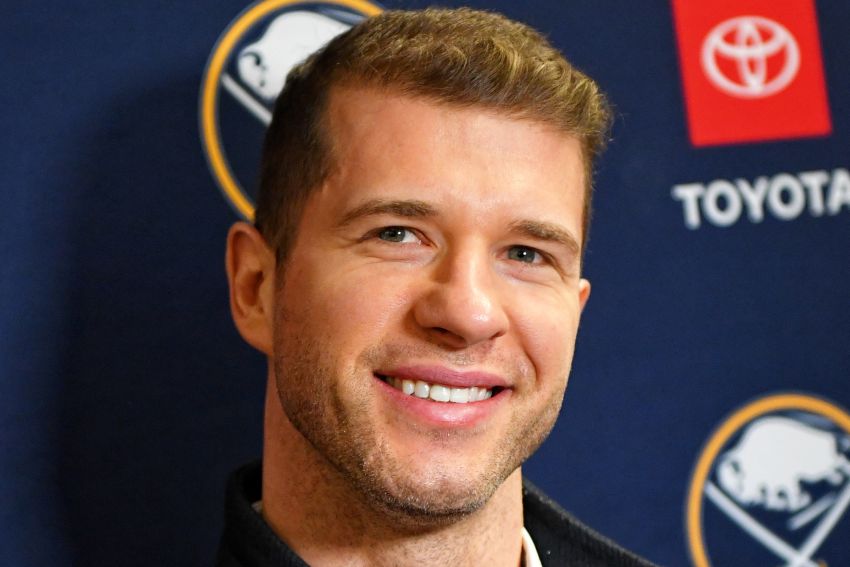 Jason Pominville is one of the most beloved and productive players in Sabres history. ©2020, Micheline Veluvolu

Pominville called Buffalo home twice – first for eight seasons, beginning as a rookie in 2005, and again when the Sabres reacquired him from the Minnesota Wild in 2017.

When his career ended last year, Pominville, who grew up outside of Montreal, kept living in Clarence with his wife, Kim, and their two children.

The family became attached to the area, loving everything it offered.

“I always thought that we would be living in Buffalo and we’d be staying there for basically the rest of our lives,” Pominville, 37, told the Times Herald on Monday.

Then the COVID-19 pandemic hit in March. Their extra time at home made Jason and Kim start thinking about their parents, who still live in the Montreal area.

“We’re not able to see our parents, we’re not able to see our friends and our family,” Pominville said as he ran errands near his home in Repentigny, Quebec. “Then it kind of started making us realize that, like, what if something happens? … Our kids, they haven’t really had a chance to see grandma and grandpa besides only in the summertime.”

The Pominvilles wanted to give their kids, Jayden, 10, and Kaylee Rose, 8, the opportunity to see their grandparents every day and catch up.

“It never even crossed our mind before this whole lockdown and COVID-19 situation,” said Pominville, one of the most beloved and productive players in Sabres history.

On June 1, the Pominvilles moved back to Montreal. Anyone entering Canada must stay quarantined for 14 days, so Monday was the first day they could get out of the house.

Right now, they’re living in their old offseason home. This summer, they plan to move to a different house in the same neighborhood.

At first, Pominville wasn’t sure if they should stay in Buffalo for another year. But he and Kim knew the longer they waited, the tougher it would be for their kids to leave.

Pominville had already committed to coaching Jayden’s team next season with the Buffalo Jr. Sabres, so he contacted the parents and explained his situation.

“I felt terrible about having to reach out to them,” he said.

Pominville said packing up their house – they found a buyer in just a few days – and making arrangements to move was an emotional experience.

He added: “It definitely wasn’t an easy thing to do.”

A year ago, there was speculation the Sabres could re-sign Pominville. Fresh off a 16-goal season, the winger did not want to retire after playing 1,060 games over 14 seasons.

Pominville spent the summer training in Buffalo’s facilities. But as training camp passed and the season progressed, it became clear the Sabres had moved on.

“I always kind of knew a little bit in the back of my mind that it might be over with,” said Pominville, who ranks in the top 10 in franchise history in games, goals, assists and points.

Pominville, however, kept training, holding out the faintest bit of hope a team could come calling around the trade deadline.

“The chances at that point were really, really slim,” he said. “I hadn’t played since April of the year before. I felt like I owed it to myself just in case something interesting happened.”

Nothing, of course, materialized. So Pominville transitioned to the next phase of his hockey career.

In May, he joined Pionniers de Lanaudière as an associate coach at the peewee and midget espoir levels. He will also serve as an adviser and specialist with the hockey organization’s skills academy. He grew up playing for the Pionniers in Repentigny.

While Pominville will help coach two teams, including Jayden’s, and do other work, his duties won’t consume him.

“I want to make sure I can spend more time with the family,” he said.

Pominville ultimately would love to return to the NHL in some capacity.

“It’s always been in me, I’ve always loved it,” he said. “I always love being at the rink. It’s almost like I think about hockey 23 hours a day. It’s always on my mind.”

“I don’t like the attention and all those type of things,” he said. “I thought it was fitting to just kind of go away the way, I guess, I did, just kind of under the radar a little bit. … I guess it’s more fitting for the type of guy I am.”