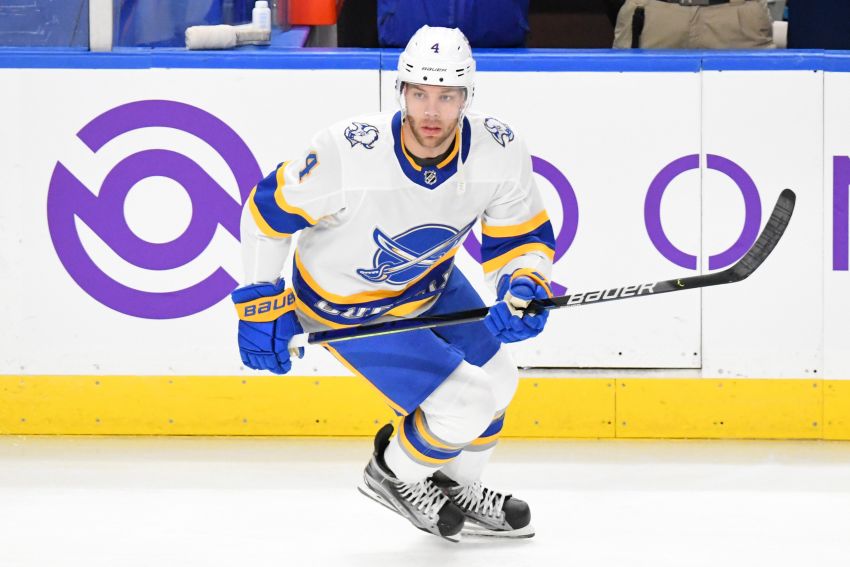 When Taylor Hall shocked the hockey world by signing a one-year, $8 million contract with the Sabres, he said he was open to staying in Buffalo on a long-term deal.

Twenty-one games into the season, Hall and the Sabres have struggled mightily.

Hall scored his first goal since opening night in Thursday’s 5-2 loss to the New York Islanders. It was his first even-strength goal this season and just his 13th point. The Sabres, having lost nine of their 11 games since their COVID-19 pause ended, rank last in the loaded East Division.

Still, the two sides could pursue an extension. TSN’s Pierre LeBrun reported Wednesday that Hall, the 2017-18 Hart Trophy winner, and the Sabres have a mutual interest.

“I’m open to anything,” Hall said on a Zoom call Thursday afternoon from Nassau Coliseum. “It’s not like I’ve had an amazing statistical year by any means so far this year. So just in saying that, I’ve enjoyed my time here, I’ve really liked the guys, the coaching staff, the way we’re treated as players.

“And like we said from the start, my agent and myself, we’re open to anything. I was never treating this as just a one-year thing. I was always coming into it open-minded. We’ll have to see what happens here, if there’s interest on their side, but, yeah, of course I’m interested.”

The Sabres can officially begin contract talks with Hall on Thursday. The 11-year veteran can become an unrestricted free agent again this summer.

If the Sabres want to deal him before the trade deadline, he could be coveted as a rental player.

Hall, 29, has endured a rough season. The ultra-talented winger had a 1.9% shooting percentage entering Thursday’s contest. He has missed a slew of prime scoring chances, including some critical breakaways.

Instead of playing beside top center Jack Eichel, he has been shifted to the second line beside Eric Staal. Hall was also one of seven Sabres players who tested positive for COVID-19.

“I’ve watched my shifts, I’ve not watched my shifts after games, and when I do, there’s not a whole lot of difference in between when I’m playing really well and when I’m not,” Hall said of his game. “As for many hockey players, it’s just very subtle changes you have to make to your game to let your skill and all that show up.

“Obviously, I think there’s been a little bit of unluckiness to my game this year, just scoring. When you do see pucks go in the net, you get confidence. It really lets your whole game kind come out.”

Hall doesn’t think he has performed as poorly as his underwhelming stat line might indicate.

“Can I be better defensively, can I do some things that maybe lead to better scoring chances and dirtier scoring chances?” he said. “Probably, so that’s my focus and I think a lot of us have to think the same way.”

Sabres coach Ralph Krueger, whose presence helped lure Hall to Buffalo, said he is “expecting that Taylor will explode here at some point.”

“He has been creating Grade A chances and mathematics should be on his side here,” he said.

Krueger said Hall has been critical of his own game.

“He definitely starts when things aren’t going well with a finger pointed at himself and not at anybody else,” Krueger said. “I find that in the conversations (he’s) very impressive, the way he’s working on it.”

Sabres defenseman Rasmus Ristolainen said prior to Thursday’s contest he did not like his play in his first three games back after battling COVID-19.

“It’s hard to come in from almost being out a month,” he said. “In the past I haven’t missed too many games, so (I’m) just trying to get in the game, that’s probably the hardest mentally – the system, the style we play and where the guy’s at and the split-second reads. …

“The conditioning part, that’s easy and that’s coming. I’m still not 100 percent. (I) just need more games in. Good thing we play pretty much every other night or back-to-back.”

The Finn was on the ice for every goal scored in the game.