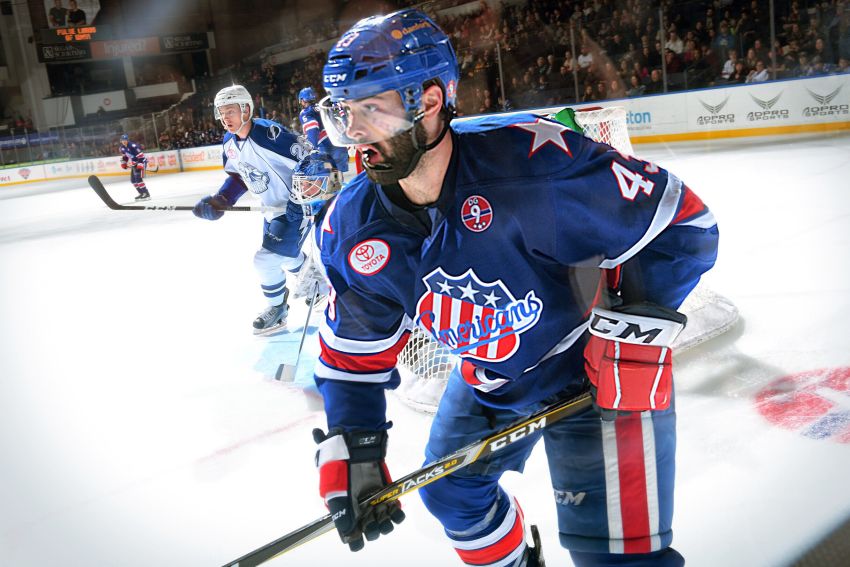 ROCHESTER – With the Americans about to suffer a devastating loss that would drop them into fourth place, coach Chris Taylor tabbed center Colin Blackwell for a crucial offensive zone faceoff.

Blackwell, 25, has been the Amerks’ unsung hero for more than a month, quietly piling up points and morphing into the AHL club’s late-season MVP.

The assist, Blackwell’s second of the night and third point, continued a torrid stretch that began in late February.

Before a pointless outing Wednesday, Blackwell scored a whopping nine goals and 15 points during a seven-game point streak. In his last 20 contests entering tonight’s home finale against the Belleville Senators, he has compiled 11 goals and 25 points.

Blackwell, whose outburst coincided with several regulars on recall to the Buffalo Sabres, thinks he possesses an even higher level.

“I still have a hell of a lot more in the tank,” he said Saturday inside Blue Cross Arena. “I just feel like I’m kind of getting going. Hopefully I can keep riding the wave. It’s just kind of one of those things, I like the opportunity and I like rising to the occasion.

“I always kind of want the puck on my stick. I’ve been given the opportunity to get those chances many different times in the game. I’m just trying to roll with it and show what I can do.”

Eight months ago, the Amerks’ biggest surprise couldn’t find a job. After scoring four goals and 11 points as a rookie for the San Jose Barracuda, the Sharks’ AHL affiliate, Blackwell was a free agent.

The Sabres invited him to their rookie camp late, only after forward Sean Malone suffered an injury.

“He stood out big time for me,” Taylor said. “I really liked his compete, his willingness to go into corners, getting over pucks, everything about him. (He was) a character guy in the dressing room. He cared if we won or lost.”

Those showings earned Blackwell an invitation to Rochester’s training camp and eventually a regular-season tryout. The Amerks signed him to an AHL deal for the rest of the season on Oct. 31.

To Taylor, Blackwell’s offensive outburst – overall, he has scored 16 goals and 44 points in 59 games – isn’t too surprising.

“I don’t know if he’s the seizing opportunity,” Taylor said. “I think he’s getting more comfortable around the room. But he was playing the exact same way and things weren’t going in at the start of the year.”

Blackwell, a seventh-round pick by the Sharks in 2011, isn’t lacking in confidence. In September, when he was just an unknown the Sabres brought in, he talked about his patience and the strong belief he has in his abilities.

Once he received a chance to showcase his talents, he said he’d “be good to go.”

“Everything’s kind of rolling – legs, body – everything kind of feels good,” said Blackwell, who missed the entire 2013-14 season with a concussion. “Coaches are putting me in some really good situations where I can succeed, building their trust. …

Blackwell has become Taylor’s No. 1 center. With so many Amerks back from the Sabres, it’s unclear what his role could be during the playoffs.

Whatever happens, Blackwell’s services should be in demand if the Sabres don’t re-sign him.