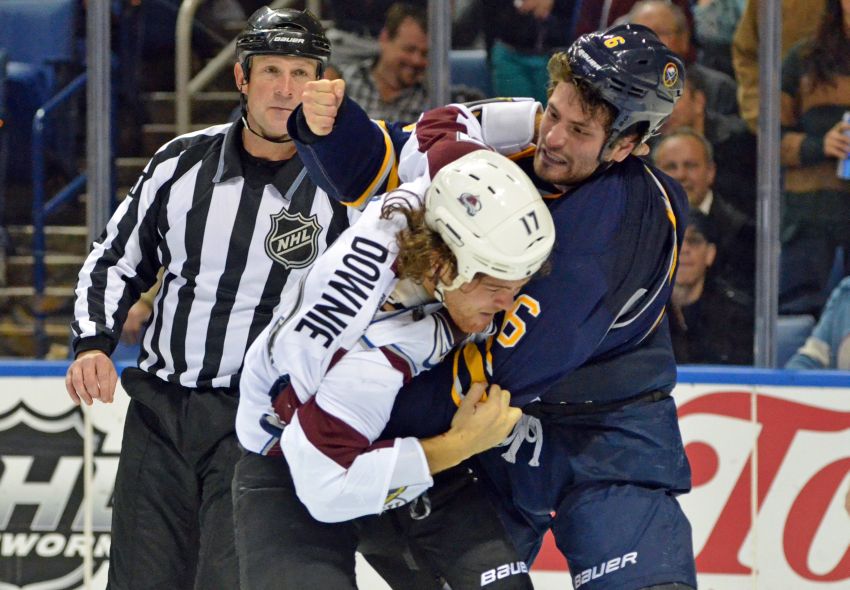 BUFFALO – The buzz began building as Drew Stafford wound up at the left point. A second later, as the winger pumped a slap shot on Colorado goalie Jean-Sebastien Giguere 14:09 into the game, the 18,422 fans inside the First Niagara Center roared, almost like the Sabres had scored.

It was, of course, a Bronx cheer – perhaps the loudest you’ll ever hear. The hapless Sabres finally had their first shot.

“That’s a low moment,” defenseman Henrik Tallinder said after the Sabres’ 4-2 loss Saturday. “I don’t know what to say, man.”

At that point, the Avalanche had two goals to go with its 12 shots.

The upstart Avs kept throttling the rebuilding Sabres, sending them to their ninth loss in 10 tries. The 1-8-1 start is the worst in the franchise’s 43-year history.

Wretched first periods are dooming the Sabres. After getting outshot 14-3 and outscored 2-0 Saturday, opponents have outshot the Sabres 141-77 during the opening 20 minutes this season and outscored them 13-1.

Like so many other contests, the Sabres got going later on and made the game interesting.

But why can’t they play well early?

“That’s a good question,” Sabres coach Ron Rolston said. “We got to get a better start.”

Tallinder said maybe there’s too much thinking or perhaps not enough.

“You pick and choose,” he said. “It’s very hard to say. I think we’re tentative at times. Even when we chip it out of our zone, they get the puck back. They can come in three-on-twos, almost breakaways. That means we’re doing something wrong as a team.

“What it is is a good question. But it comes down to playing hockey – sense, common sense.”

Rolston said “a lot of our vets are out there at the start of a hockey game.”

“I think preparation is the first thing you look at, focus on what you need to do early on in the game,” he said.

So does that mean the Sabres’ veterans aren’t preparing properly?

“We have a slow start together,” Rolston said.

Rolston’s had a slow start as coach. Since taking over the Sabres on Feb. 21, he has eight regulation wins, including zero this season.

Is he worried about his job status?

“No, I’m not worried about that,” a testy Rolston said. “My job is to worry about tomorrow, and then go to Monday and then go to Tuesday. That’s my job.”

The Sabres switched up their lineup Saturday, dressing seven defensemen.

Nikita Zadorov, the 16th overall pick in June, made his NHL debut, skating 11:01, mostly beside Jamie McBain, who returned after sitting twice.

“I liked him,” said Rolston, who said it will be tough to take the Russian out and plans to give him more minutes.

The 18-year-old Zadorov is already the sixth rookie to skate for the Sabres this season.

“I just tried to play simple every shift and play physical,” Zadorov said. “Play my game. Let everybody know how I can play.”

The Avs pounced on the Sabres early, nearly scoring about 20 seconds into the game.

Matt Duchene’s power-play score made it 3-0 56 seconds into the second period.

Cody Hodgson scored for the Sabres before Paul Stastny restored the three-goal lead. Marcus Foligno made it 4-2 later.

Incredibly, thanks to 16 third-period shots, the Sabres outshot the Avs 30-26.

To create room for Zadorov, who had been recovering from a preseason finger injury, the Sabres assigned 18-year-old rookie Rasmus Ristolainen to Rochester. The Finn, the eighth overall pick, was pointless and a minus-4 in eight appearances.

Winger Zemgus Girgensons returned after getting hit in the face Tuesday. The rookie missed one game.