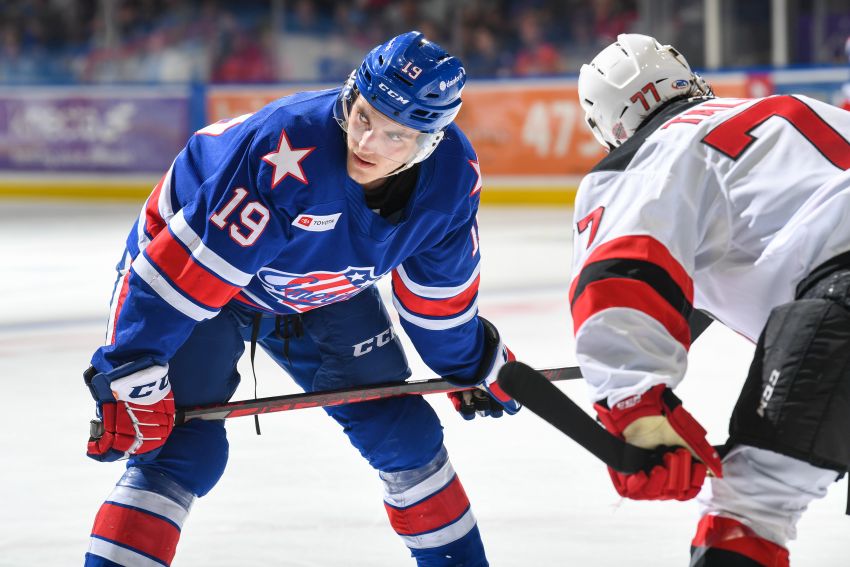 ROCHESTER – Having last experienced the postseason in 2017, when he was playing midget hockey at home in Calgary, Peyton Krebs wanted this opportunity badly.

Krebs, 21, has performed dynamically for the Americans this month, showcasing his elite playmaking skills and compiling an AHL-high eight assists during the Calder Cup Playoffs.

Following a successful 48-game stint with the Buffalo Sabres, the center has buoyed the Amerks’ first postseason run since 2005, returning to the AHL flush with confidence.

But Krebs’ brief and prolific AHL career – counting the playoffs, he has compiled 33 points in just 31 games – could end tonight if the Amerks lose the decisive Game 5 of the North Division semifinal in Utica.

The Amerks grabbed a 2-1 series before the Comets roared back in Game 4 on Tuesday, winning 4-2 at Blue Cross Arena.

“I believe in this group, and we’ll come up big here next game,” Krebs said Tuesday after being held pointless for just the second time in six postseason games.

That Krebs, who returned to the Amerks when Buffalo’s season ended, would embrace his assignment to the AHL isn’t surprising. Since arriving from the Vegas Golden Knights on Nov. 4 in the Jack Eichel trade, he has often spoken about how comfortable he has grown in the organization.

“It doesn’t matter who you are, where you’re from,” Krebs said May 1 as the Sabres held end-of-season meetings at KeyBank Center. “You’re going to get treated the exact same way and that’s all you can ask for at the end of the day. Everyone loves being here.”

He added: “Everyone’s very welcoming. They allow you to be yourself.”

Of course, leaving Vegas, the team that drafted Krebs 17th overall in 2019, was intimidating. He had grown up with the Golden Knights, and he said he never expected to be dealt.

“I’ll be honest, there was some times when I was nervous,” Krebs said of coming to a new organization. “I was, ‘Holy, what’s going on? I’m in Buffalo, New York.’ You never thought you’d be here, whatever, four years ago. It was a lot of change. But I did my best to embrace that and I absolutely loved it.”

Krebs found familiar faces in Buffalo. Winger Alex Tuch accompanied him in the trade. Ex-Golden Knights Cody Eakin and Malcolm Subban were also on the roster.

The Sabres assigned Krebs to Rochester following the trade, and he played 16 games before earning his first recall. Other than a two-game stint with the Amerks during the NHL All-Star break, he remained with the Sabres until their season ended.

The rebuilding Sabres thrust Krebs into a leading role, often having him center a scoring line. He established himself as a tenacious two-way threat, skating on the second-power play unit and killing penalties. He also played left wing.

Krebs’ supreme vision and precision passing make him arguably the Sabres’ best playmaker, and he finished with seven goals and 22 points. The Sabres, meanwhile, ended the season on a 16-9-3 run.

“When I’m done playing in the playoffs, I’ll take some time to reflect and it’ll be pretty cool,” Krebs said of his whirlwind season. “I’m excited about what the year did for me and as a team and I’m excited for what the future holds.”

When training camp begins next season, Krebs will almost certainly have a spot on the Sabres’ second or third line.

His new city also offers Krebs a feeling of home he did not have in Vegas.

“Coming from Vegas, obviously, it’s a lot different from where I’m from in Calgary,” Krebs said. “Coming to Buffalo, it was a breath of fresh air. It felt like home. Winter, there’s trees around. I’ve said this before, I want to have kids one day and I want them to have a backyard rink that they can play on. In Buffalo, you’re able to do that. …

“My dream is to have a house with a lot of trees. There’s a lot of trees here. Those little things, I think, kind of just helped me embrace being here more.”