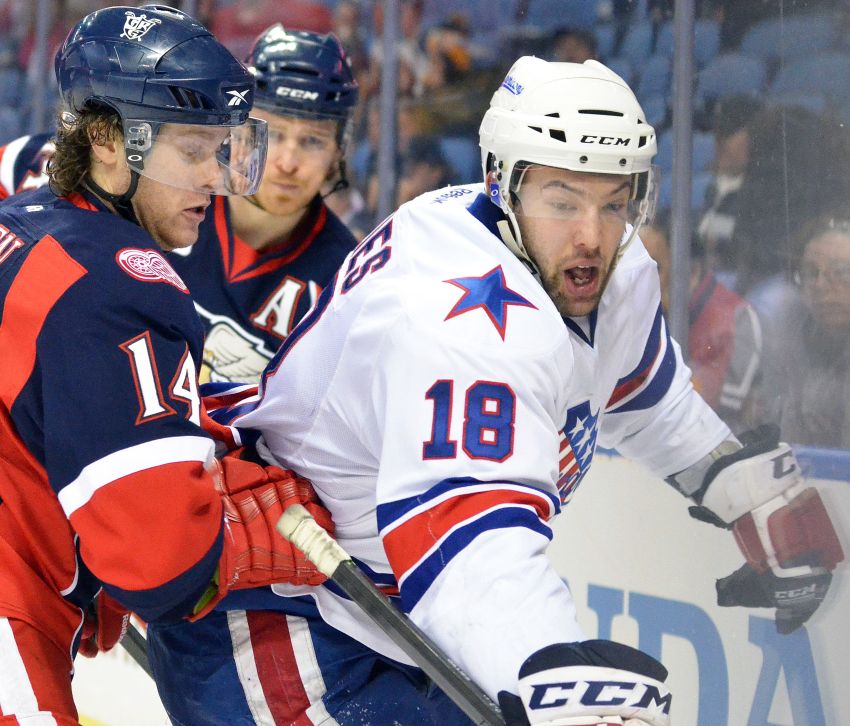 ROCHESTER – The summer dragged on and on, and Colton Gillies, a former first-round pick with 154 games of big league experience, couldn’t find any work.

Gillies was still months away from turning 25. He had just spent two straight seasons in the NHL. At 6-foot-4, he possessed size, a precious commodity, yet skating was his biggest asset.

Still, no one wanted him.

“I’ve never experienced anything like that,” Gillies said Saturday after a gritty one-goal, two-point effort in the Americans’ 3-2 Calder Cup playoff win against the Chicago Wolves inside the Blue Cross War Memorial.

Finally, two days before training camp began in September, the Buffalo Sabres invited Gillies in for a tryout.

“It was kind of a whirlwind,” the winger said.

Gillies impressed, scoring a goal during an exhibition appearance. Then the NHL’s worst team released him.

There was a silver lining, however. The Sabres wanted Gillies, who hadn’t played in the minors since 2011, for the Amerks. They signed him to an AHL contract.

Gillies, the 16th overall selection by the Minnesota Wild in 2007, couldn’t even earn a two-way deal.

“They made sure to have in my contract that any NHL team could pick me up, which was nice knowing they kind of wanted me here,” Gillies said.

A lot of teams might want Gillies this summer. He quickly became one of the Amerks’ steadiest players, scoring nine goals and 23 points in a checking role during 65 games.

“I want to be back in the NHL and … I don’t just want to be a fill-in guy, I want to be there and make a difference and play,” said Gillies, who played 27 games with the Columbus Blue Jackets last season.

Moving down and playing regularly has helped Gillies. Amerks coach Chadd Cassidy said Gillies told him early on he “just wanted to play hockey” and forget about the expectations that had accompanied him as a high pick.

“He just wanted to get back to playing and being part of a team and getting out and being a contributor,” Cassidy said. “I think he did a really good job of focusing on that and just focusing on being on Rochester and being the best player he could for us.”

If Gillies had an NHL contract, the Sabres likely would’ve recalled him when they endured a rash of late-season injuries. Instead, he stayed down, helping the Amerks roar into the postseason on a 7-1-1 run.

Gillies was arguably the best player Saturday as the Amerks tied the series first-round series. He knotted the game at 1 in the second period before his nifty pass created Chad Ruhwedel’s go-ahead goal later in the period. In the waning minutes, with the Amerks clinging to a one-goal lead, Gillies blocked a shot with his crotch.

He stayed in the game.

“I feel like the playoffs is kind of my style of game, go around, hit guys and make it hard on them to play,” said Gillies, the left winger on a strong checking line with center Tim Schaller and Brayden Irwin.

Cassidy said Gillies’ mix of grit and speed “is built for the playoffs.”

“He’s a big, physical player,” Cassidy said. “He rises to the occasion. He builds off of momentum and he plays off of adrenaline and emotion. This is the time of year he enjoys the most. You can see that in the way he plays.”