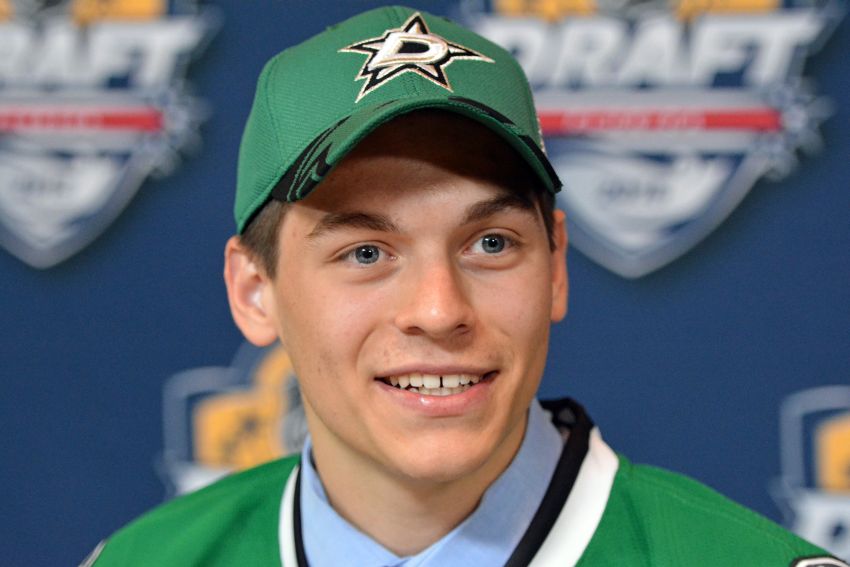 SUNRISE, Fla. – Youngstown native Joe Cecconi said he started getting “a little bit scared” as the NHL Draft wore on Saturday. The defense prospect still hadn’t been picked almost halfway through the fifth round.

“I was like something might not happen, I might not get chosen,” a smiling Cecconi said after the Dallas Stars selected him 133rd overall inside the BB&T Center. “But seeing Dallas was up and they called my name, the dream has started.”

Cecconi, who spent last season playing for the United States Hockey League’s Muskegon Lumberjacks, wasn’t even paying attention when Dallas was on the clock. The 18-year-old talked to about 10 NHL teams prior the draft, although he never spoke to the Stars.

“Then they said Muskegon, I was, hey, that’s me,” said Cecconi, who had about 15 family members and friends with him.

Cecconi then walked down to the floor, put on a green Stars jersey and hat and shook former Sabres coach Lindy Ruff’s hand. Cecconi rooted for Ruff’s best teams – he liked watching Daniel Briere, Brian Campbell and Chris Drury – as a child.

“It was awesome,” Cecconi said about meeting Ruff. “Growing up watching him coach the Sabres, it was pretty cool.”

The Stars, of course, haven’t been very popular around Buffalo since beating the Sabres in the 1999 Stanley Cup final.

“I might get some dirty looks at home if I wear this hat around,” Cecconi said.

Cecconi will fly home today, pack his belongings and drive to the University of Michigan on Monday to begin his freshman year.

“I want to get bigger, faster and stronger as every hockey player should,” he said. “I was just want to fine-tune all the defensive things I’ve learned and get a little more offensive.”

One other Western New York prospect, Williamsville’s Dennis Gilbert, was drafted in the third round, 91st overall, by the Chicago Blackhawks.

The Sabres had the next pick and were interested in the defenseman.

“Being from buffalo, it would’ve been cool to go to the Sabres,” Gilbert said. “But Chicago’s a great organization.”

Murray and others with the Sabres got to know Gilbert a little bit recently. His son recently spent some time on the ice with Gilbert at HarborCenter.

“My son comes home and says he’s a great kid and he’s talking like he’s a man and he’s 17,” Murray said. “So we certainly had interest in him.”

Gilbert, who will attend the University of Notre Dame next season, spent last season with the USHL’s Chicago Steel. He had 10 family members watching.

“My dad was ecstatic,” Gilbert said. “My mom started to cry a little. “It’s been a great weekend for the family to experience this as a whole.”