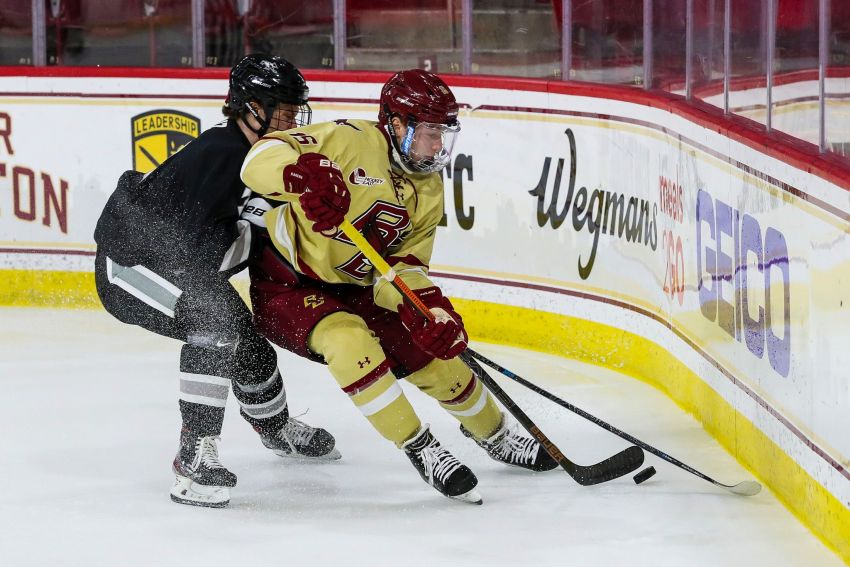 Les and Faye Kuntar wanted to support their oldest son, Trevor, and hopefully celebrate his selection by an NHL team.

A year earlier, Trevor Kuntar had gone undrafted. The snubs fueled him, and the extra year helped the Williamsville native to develop into a stronger prospect. So when the second day of the NHL Draft started Oct. 7, the Boston College freshman was expected to be a mid- or late-round pick.

His parents drove seven hours to Boston to watch the NHL’s first virtual draft with their son. But when the Kuntars gathered in their hotel room next to campus, they learned that Marriott doesn’t carry the NHL Network.

“We had to do live stream on the computer,” Trevor Kuntar said. “It was funny.”

For the next few hours, the family watched the draft unfold on a laptop. Around 3 p.m., as Kuntar’s afternoon practice approached, he said his phone started “blowing up.”

“The live stream must’ve been a little behind the regular TV,” he said.

Kuntar, 19, was being flooded with congratulatory messages after the Boston Bruins had drafted him in the third round, 89th overall.

The Bruins phoned Kuntar to inform him they had selected him, and he spoke to general manager Don Sweeney and other members of their brass.

“It was just such an awesome experience,” Kuntar said. “It was literally a dream come true.”

It also fulfilled a dream for his parents.

“We laughed, we cried, we were emotional,” Les Kuntar said. “Pretty awesome.”

When Trevor Kuntar arrived for his 4:30 p.m. practice – he was in the second of two groups – he said “everyone was pretty pumped up.”

“He got a rousing cheer when he came in the locker room, that’s for sure,” Boston College coach Jerry York said.

Having been drafted by the Montreal Canadiens in 1987, Les Kuntar understands his son’s accomplishment well. The elder Kuntar, a former goalie, played six games for the Canadiens in 1993-94, the highlight of his six-year pro career.

“It just reassured (him) that everything he’s done and the hard work he’s put in off the ice, on the ice … just kind of paid off,” Les Kuntar said. “It’s given him confidence, for sure.”

Kuntar, a third-line left winger, has quickly adapted to NCAA hockey, scoring four goals and five points in his first six games. York said the 6-foot, 195-pound Kuntar averages about 17 minutes of ice time a game and also skates on the power play.

“He has all the intangibles,” said York, a 2019 inductee into the Hockey Hall of Fame. “He’s gritty, he’s hard-nosed, he has a good awareness of where to be on the ice.

“Now he’s just got to work on the quickness and just the pace of his game. I’ve seen some good improvement in that part of his game.”

Kuntar was supposed to play college hockey three miles away in Cambridge. But he decommitted from Harvard after the Ivy League postponed its 2020-21 seasons because of the COVID-19 pandemic. The league has since canceled all the seasons.

“I definitely feel like I made the right (decision),” Kuntar said of switching schools. “It was obviously super tough, because I loved the coaches there and they treated me awesome. But ultimately, I wanted to play hockey. This has been an awesome fit for me.”

Of course, playing during a pandemic has been unique. Boston College’s season-opening series against Vermont was postponed. The Eagles have been playing in empty rinks.

“Everybody’s just so excited to finally be back playing that it’s not too much of a difference,” Kuntar said. “It feels like it’s a real game and all the energy’s the same. But it’s definitely different without the fans.”

Trevor Kuntar (@NHLBruins) gets his first career @NCAAIceHockey goal with the backhand.