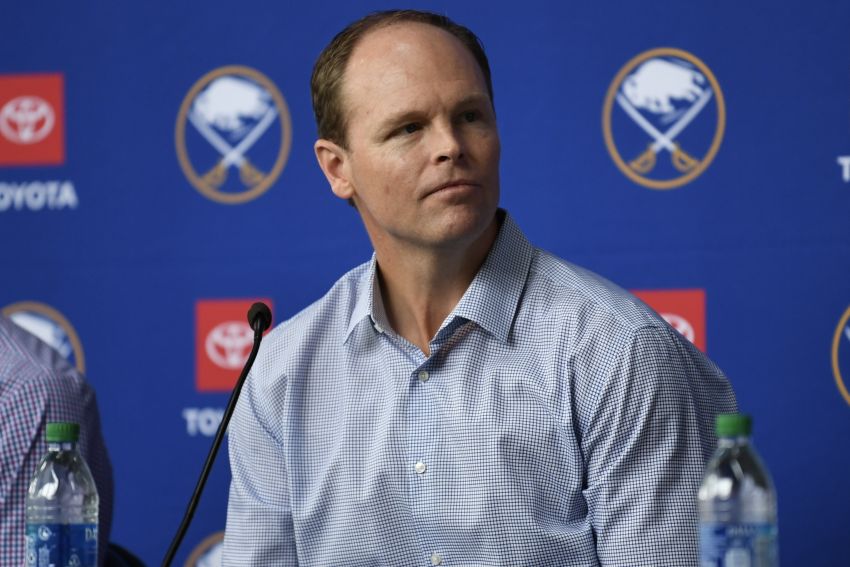 BUFFALO – In winning four of their last five games, including two straight road contests in overtime, the Sabres have taken significant steps over the past two weeks.

For one of the few times in the past decade, the Sabres are clearly improving as the season progresses. So as the trade deadline approached, general manager Kevyn Adams had to decide if dealing some influential veterans on expiring contracts was worth the return.

Was trading them for, say, a mid- or late-round draft pick worth it? Yes, the Sabres won’t make the playoffs this season. But Adams believes the rebuilding team can keep making progress over the final 19 games.

“Going into this it felt like everything that we wanted to do or not do was going to be based on the development of our team and the development of the young core,” Adams said Monday inside KeyBank Center after the 3 p.m. deadline passed.

So Adams, who on Sunday traded defenseman Robert Hagg to the Florida Panthers, did not make any more deals Monday.

“It was always about what was best for this group moving forward,” Adams said. “What was the best thing for the development of this group? And (I) really wanted to be mindful of putting these players in a position to keep getting better. I like what I’m seeing in terms of our team and the dynamic in the locker room and that growth of players.”

Adams said pulling Anderson, Pysyk out of that dynamic would’ve been tough.

“At the end of the day, would we have been open to doing more?” Adams said. “You know, for sure. … But we had a plan, we were going to stick to the plan. We weren’t gonna let the emotion of a deadline or any sort of pressure change our plan. And that’s what we did.

“And … I just really believe these next 19 games for our group are so important. It’s important that we continue to push ourselves, continue to hold each other accountable, continue to grow, and I felt that the position that we’ve put ourselves in with the group we have will allow us to keep doing that.”

After Thursday’s ugly 6-1 loss to the Edmonton Oilers, the Sabres responded Friday by beating the Calgary Flames 1-0 before Sunday’s 3-2 win over the Vancouver Canucks.

Adams said the strong response by the Sabres following one of their worst setbacks this season showcased their growing maturity.

“To look inside in the locker room and say, ‘OK, that wasn’t good enough in Edmonton. Why wasn’t it good enough? Well, the answer’s within the room and now let’s figure it out,’” Adams said. “And that’s a huge step for us, by the way, to go into two tough buildings and very good teams and to answer the way our group did.

“So that goes back to my point of when you’re developing as a team and you’re developing young players, those experiences can exponentially jump you forward. And if you take maybe some of that away from our guys based on making decisions or changing things, maybe there’s a setback there.”

Adams said he spoke to Anderson, the Sabres’ No. 1 goalie, Monday morning.

“He reiterated that, yeah, if there was an opportunity possibly maybe it would be great for him in a certain place,” Adams said. “And he also said, ‘I love it here and this has been an amazing organization to be a part of.’ (He) wanted to be here, which was a big deal to me.”

Of course, Anderson, who just won his 302nd NHL game, and Pysyk are two of several veterans the Sabres kept. Center Cody Eakin and winger Vinnie Hinostroza likely generated some interest from teams.

For months, the Sabres were expected trade defenseman Colin Miller, another free-agent-to-be. But Miller has played just twice since undergoing surgery in January.

Having returned last week from an upper-body injury, he did not have enough time to show he’s healthy.

“For his sake, if there was an opportunity to do something, (I) would’ve,” Adams said. “I just think that the health, coming off an injury that he was coming off of, obviously teams that are looking to add and go on a deep playoff run, there’s questions around that. They want to make sure.”