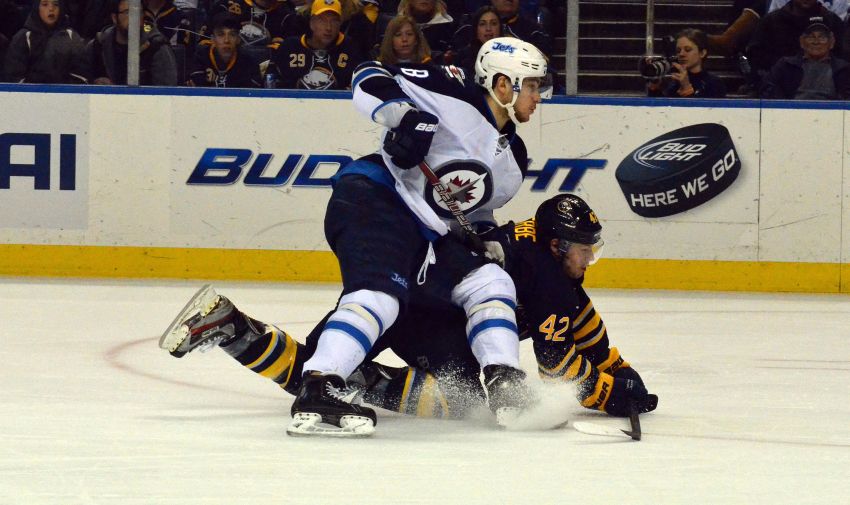 In about 10 minutes during the first period Thursday, diminutive Buffalo Sabres winger Nathan Gerbe scored as many goals as he had in the previous 38 games, a stretch dating back to Feb. 11, 2012.

First, Gerbe opened the scoring 6:30 into the tilt, utilizing an “NHL 94 move” to perfection by stopping in the right circle and cutting sharply before roofing a shot by Florida Panthers goalie Scott Clemmensen.

Fresh off his first goal since March 10, a 21-game stretch, Gerbe scored the third goal in the Sabres’ 4-3 shootout victory at 16:46, putting a nice move on Erik Gudbranson in the right circle and beating Clemmensen again as he fell to the ice.

Two nifty goals from someone who’s expected to score them.

So why can’t Gerbe do that regularly?

The 25-year-old scored at a torrid pace in the NCAA and AHL. Of course, that doesn’t always translate to the big leagues. But Gerbe scored 15 of his career-high 16 goals over a 38-game stretch in 2010-11.

Theories for Gerbe’s low output include:

– Injuries have worn him down. In the last 15 months, Gerbe has endured a concussion (following a dirty hit from behind), a muscle pull and underwent offseason spine surgery (a scary procedure related to the same hit). He wasn’t even ready to return until January.

“I think sometimes using the word ‘checking’ is a copout,” Ruff said April 3.

Obviously, Ruff expected Gerbe, who’s been known to miss some prime scoring chances, to score. He misfired on one late Thursday, passing the puck on a two-on-one break instead of shooting.

At this point, more than four years after his NHL debut, maybe Gerbe’s just a third- or fourth-line checker capable of some occasional goal outbursts.

One thought on “Why can’t Sabres’ Gerbe score regularly?”