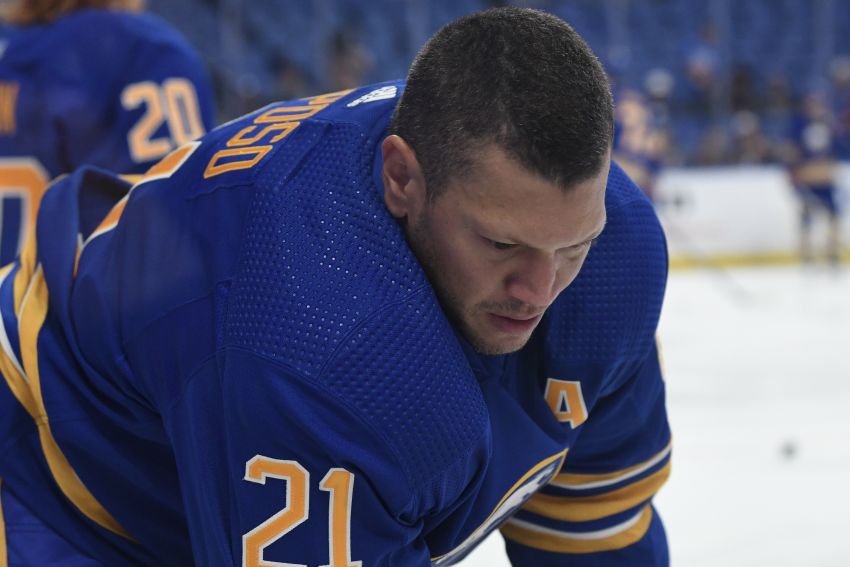 It was a recipe for disaster Thursday. The Buffalo Sabres played the second game of a back-to-back missing a whopping 11 players because of injury or illness.

Not surprisingly, the Sabres, who had four players make their debut a night earlier, struggled early and fell 4-1 to the New York Islanders.

In COVID times, of course, teams can find themselves down several players in a day or two.

The Sabres have built up some nice depth over the past year. On Wednesday, they inserted center Peyton Krebs and winger Alex Tuch, two big assets they received in the Jack Eichel trade from the Vegas Golden Knights

Still, when you’re missing about half your regular lineup, it’s going to bite you.

Following the Sabres’ third consecutive loss (0-2-1), winger Kyle Okposo acknowledged how difficult it is having so many new faces.

“Looking around yesterday before the game, just a ton of new faces and it felt almost like a preseason game where … you have so many guys in the lineup that you’re not familiar with,” Okposo said on a Zoom call from UBS Arena. “But I think that (Rochester) has obviously been playing very well this year. I think that we have some depth as an organization now and first-game jitters obviously last night for a lot of different guys.

“But we have to try and continue to use that depth right now. … It’s a COVID world right now.”

The Sabres started slowly Thursday, falling behind when Mat Barzal scored at 12:35. Okposo’s power-play goal 19:00 into the first period tied it.

But the Islanders pulled away in the second period, getting the go-ahead goal from Kieffer Bellows before Anders Lee’s power-play score.

Noah Dobson’s third-period goal sealed it for the Islanders, who played for the first time since Dec. 19.

“Part of it was finding a rhythm,” assistant coach Matt Ellis said of the Sabres’ struggles. “We discussed it a little bit last night. Just guys understanding structure and the way that we play. But at the end of the day, it comes down to the compete level.

“Some of our puck decisions weren’t great. We made things hard on ourselves, and one of the things when you look at what New York did, they played a mature game and they capitalized on some of those decisions that at the end of the day, came back to cost us.”

Ellis, who’s filling in for head coach Don Granato while he’s in the NHL’s COVID-19 protocol, changed some lines and defense pairs following Wednesday’s 4-3 loss to the New Jersey Devils.

“Part of it was having a pulse for things,” Ellis said. “You look at back-to-backs, you look at guys playing in certain situations. You’re trying to find a little bit of a spark. I thought at times we struggled having that rhythm.”

The new trio of Krebs Okposo and Victor Olofsson was one of the Sabres’ few bright spots, creating much of their offense. Krebs and Okposo played together Wednesday before Olofsson joined them at left wing.

“We have good chemistry and … we created enough chances to score,” Olofsson said.

Okposo pumped seven shots on goal, while Olofsson had four.

Okposo said he and Krebs needed a few periods to figure each other out.

“I didn’t know a ton about his game before last night, to be honest with you,” Okposo said. “That second period we just got it going where I wanted the puck on his stick as much as possible. He really sees the ice very well. He’s able to make little plays and he makes him some passes that are really elite.”

The Sabres pumped 37 shots on goalie Semyon Varlamov. Goalie Malcolm Subban made 28 saves in his third start for the Sabres.