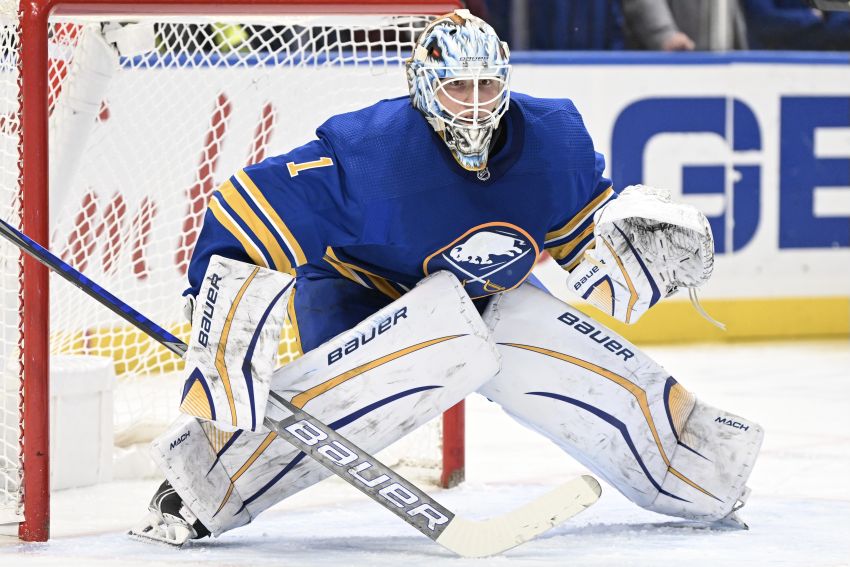 For the past week, Luukkonen’s emergence has forced the Sabres to make roster moves nearly every day, shuffling players to the AHL in paper transactions. Keeping three goalies in play has been difficult, and they clearly can’t do it much longer.

Luukkonen, 23, has started three straight games and 16 of the last 24 contests. The Finn, who has won seven of his last nine outings, is clearly the Sabres’ No. 1 goalie, a status coach Don Granato essentially confirmed prior to Monday’s game.

“Over the last little bit he’s shown us that, OK, if the three guys are ready, the edge is to him right now,” he said. “He’s in a groove, he’s been winning games. And so today’s decision, based on winning (Saturday in Nashville), he’s the guy, he’s fresh.”

But Luukkonen will almost certainly “sent down” before tonight’s road game in Chicago, leaving Anderson or Comrie, who returned from a lower-body injury last week, to face the Blackhawks. Comrie dressed as the backup on Monday.

In another paper move Monday morning, the Sabres recalled Luukkonen and sent center Peyton Krebs to the Amerks. Granato said Krebs will be back today.

Update: Krebs has been recalled and Luukkonen has been loaned to Rochester.

Luukkonen will likely be summoned again before Thursday’s home game against the New York Islanders.

While he has arrived as the Sabres’ starting goalie, Luukkonen plans to stay in the moment and keep treating each day like he has all season. The rookie struggled following his arrival in mid-November and if Comrie had missed just a week or two, he would’ve been returned to Rochester for more seasoning.

“With everything this season, getting the call-ups and not starting too hot and getting the wins and being on the win streak and everything like that, in the end, it’s about the next game,” Luukkonen said. “Same with the three-goalie situation. You just want to focus on the next practice, next game and get better.”

Luukkonen was one of the Sabres’ only bright spots Monday in a dreadful performance before 15,251 fans at KeyBank Center.

Win or lose, Granato usually maintains an even keel postgame. But on Monday, he was irked with the Sabres’ lack of emotion following their fourth consecutive home loss.

They’ve earned their last two wins in front of raucous crowds. On Saturday, they beat the Predators 5-3 at Bridgestone Arena, one of the NHL’s toughest venues. On Jan. 7, they downed the Minnesota Wild 6-5 in overtime before a capacity home crowd.

“We didn’t have the emotional energy that we had,” Granato said of Monday’s game. “It’s two weeks in a row now, really big highs on a Saturday night, two days later on a Monday we couldn’t get the energy, the emotional energy. I thought from the outset, you can see it, you’re shifting lines around a little bit hoping that something will start a fire, you’re hoping you score early and get a break early, we hit a couple of goal posts.”

“We just didn’t quite start on time today,” Sabres captain Kyle Okposo said. “They obviously had some jump. It’s a big game, and they knew it right away, and they came out and they jumped on us. When we realized we were in a fight, it was a little too late.”

Winger Alex Tuch scored the Sabres’ only goal 11:27 into the third period, his career-high 21st, after being moved off the top line and beside Okposo and Tyson Jost. Meanwhile, Dylan Cozens took Tuch’s spot with center Tage Thompson and Jeff Skinner.

“I know that I speak for Tommer and Skinny, we weren’t good tonight, especially defensively,” said Tuch, who was a minus-3. “We got to be better. We got to make better plays coming out of our zone, we have to bear down a little bit more defensively, especially if it’s not happening offensively.

“We have to help the team win in any way possible, and we didn’t do that tonight.”

Okposo, who nearly tied the game twice in the first period, was the Sabres’ only threat most of the afternoon.

“We didn’t have enough, we didn’t have it,” Granato said. “Perfect glaring example for anybody who watched the game was a guy with the veteran experience of Kyle Okposo, knows how to dig, pull that out, extract that out of himself. He was our best player, no question about it.”

The Panthers moved two points ahead of the Sabres in the chase for the final wild card playoff spot. The Sabres, however, have three games in hand.

Following a season out of the NHL, former Sabres center Eric Staal – sounds weird, doesn’t it? – has parlayed a training camp tryout into regular duty with the Panthers.

Staal, one of the NHL’s most decorated players, has compiled all seven of his goals in the last 17 games.

“He’s got lots of game and he’s got a defined game,” Panthers coach Paul Maurice said. “He’s not inconsistent in his play. I mean, he plays the exact same game, veteran guy, likes to work the puck behind the net.”

Staal, 38, played 32 games for the Sabres in 2020-21 after Kevyn Adams acquired the respected veteran, his former teammate, in his first trade as general manager.

The Sabres, of course, imploded that season, finishing dead last. Staal stayed until Adams dealt him to the Montreal Canadiens on March 26, 2021.

He’s the oldest player on the veteran-laden Panthers. His younger brother, Marc, 36, is a defenseman on the Panthers.

Ex-Sabres defenseman Casey Fitzgerald said he was taking a nap Wednesday preparing to play for the Rochester Americans when he learned the Panthers had claimed him off waivers.

“When I got the call that Florida picked me up, that was a surprise,” Fitzgerald said in the press box during the second period. “I didn’t know, it was about 2 o’clock. The deadline ended at 2, so it was very last minute.”

Fitzgerald, 25, has been scratched all three games since his arrival. Maurice said “he’ll get his opportunity.”

“We just felt we needed that right-hand shot,” he said. “He’s a gamer, he’s going to play real hard.”

The Sabres made one lineup change against the Panthers, inserting winger Zemgus Girgensons, who was sick Saturday, for winger Vinnie Hinostroza.