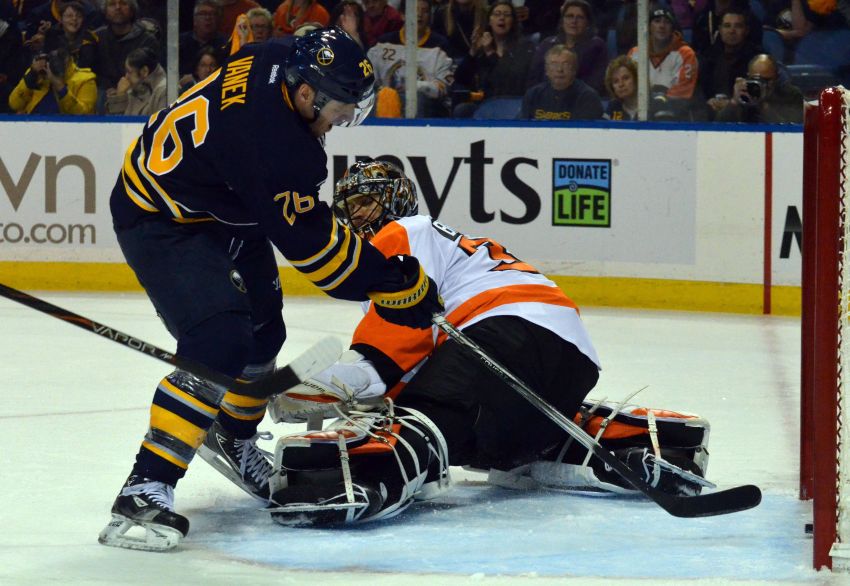 BUFFALO – It was as if nine months hadn’t passed. One game into a new season, the Sabres kept exorcising their old demons, picking up where they left off last winter and spring during an exciting 5-2 triumph over the Philadelphia Flyers on Sunday inside a noisy First Niagara Center.

Like so many other times during recent years, the Sabres nearly lost control. Their early 1-0 lead became a 2-1 second-period deficit. The Flyers tried pushing them around.

Instead of wilting, the Sabres buried the Flyers. Minutes after Vanek’s power-play goal tied it at 2, Drew Stafford provided the afternoon’s seminal moment, challenging and fighting Scott Hartnell after the pest had hit Tyler Ennis.

It didn’t matter Stafford lost the scrap. A message had been sent as the capacity crowd of 19,070 fans roared.

The Sabres blitzed the Flyers during a wild third period, getting the go-ahead power-play goal from Tyler Myers at 14:57. Hodgson iced it later before Vanek scored an empty-net breakaway goal.

The Sabres mirrored the team that nearly completed an improbable 10-week run from last place to the playoffs in 2011-12.

They played a sturdy game backed by franchise goalie Ryan Miller. They responded to adversity. They received timely and plentiful goal scoring. And they refused to back down physically.

“It’s not something you’re going to see out of me too often,” Stafford said about fighting. “It carries over from last year. Everyone in this lineup is going to try to hold each other accountable for being hard to play against.”

A pleased Ruff said the Sabres need to keep raising their physical intensity and morph into an even tougher team.

“I think everybody’s determined to become that team, and it doesn’t happen in one game,” Ruff said. “It was great to see tonight. It’s something you got to earn after maybe five, 10 games and you can do it on a consistent basis. The other team finally says … ‘These guys are getting really tough to play against.’”

The Sabres are also tough to defend against when they’re clicking on all cylinders.

“I thought Van was fabulous and (Hodgson) was terrific and Pommer was right somewhere between those two,” Ruff joked.

Vanek said: “I’ve got good linemates. I was a little bit lucky. At the same time, it won’t happen to me too many more times. It’s the two points (for winning) that count right now. We’ve got to keep going.”

After spending most of the season together, the players finished well on separate lines in March. Vanek busted out of a three-month slump and Pominville put the final touches on a strong 73-point season.

“They spent a lot of years playing together, going all the way back to the years playing in Rochester,” Ruff said about Pominville and Vanek. “I said at the start of the one-week camp that the best thing we can do is try to keep some players together that are familiar together, that you don’t have a lot of time to spend.

“Those two guys are a little bit like glue.”

Hodgson’s the wild card. The 22-year-old’s beginning his first season as one of the Sabres’ top two centers. On Sunday, he was arguably one of the two or three best players on the ice.

“We look at those guys as being our top line that can push us to that level, and Cody is getting that opportunity that he wanted to get when he left Vancouver (last season), to get out of that 12- to 14-minute range and become a one, two centerman.”

Newcomer Steve Ott’s power-play goal opened the scoring 11:07 into the contest. Sean Courturier tied it early in the second period before Claude Giroux’s power-play tally put the Flyers up briefly.

But the Sabres, who play the Maple Leafs tonight in Toronto, never blinked.

“We kept our focus, kept our composure,” Pominville said.