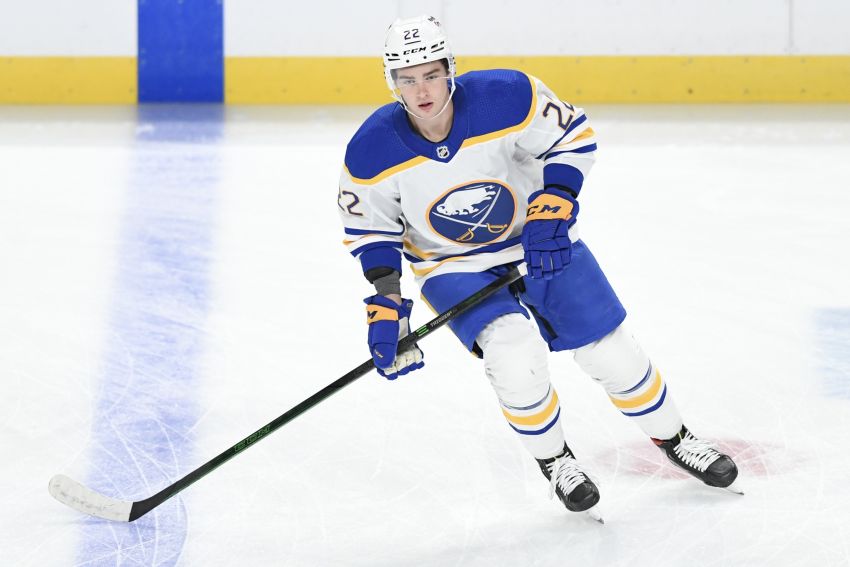 BUFFALO – When Sabres prospect Jack Quinn suffered a lower-body injury early in his second NHL game Jan. 20, he pushed through and figured it wasn’t that bad.

“I guess I had a lot of adrenaline or whatever,” said Quinn, who scored his first NHL goal later that night and finished the Sabres’ 5-4 loss to the Dallas Stars. “It wouldn’t sideline me, I was thinking, I thought it’d be something I could play through for a bit and it’d go away. But it wasn’t the case.”

Quinn, who this afternoon was assigned to the Rochester Americans, practiced with this Sabres earlier today, his first session since suffering his injury. The winger skated in a contact role on a line of extras with winger Vinnie Hinostroza, who also returned from a lower-body injury, and center Mark Jankowski.

The Sabres, who close their five-game road trip Wednesday against the Toronto Maple Leafs listed Quinn and Hinostroza as day to day on the injury report they released today. Sabres coach Don Granato hopes both will be ready to play this weekend.

“They were great today, so the information we got today was couldn’t have been any better,” Granato said following the session inside KeyBank Center. “They pushed it pretty hard today and they were taking contact even though it was no. They were in physical battles. So that is really good news.”

“It’ll take a couple practices to get myself back in terms of all the stuff you can’t replicate in a rehab skate,” he said before he was assigned to the Amerks.

In other injury news, Granato said defenseman Henri Jokiharju, out the last two games with a lower-body injury, could return by the end of the week. The Finn is listed as week to week on the injury report.

Since returning from his upper-body injury Feb. 19, Mittelstadt, 23, has registered only one assist. In Sunday afternoon’s 4-2 loss in Dallas, he played just 14 minutes, 59 seconds, his lowest total in a game this season in which he wasn’t injured.

So Mittelstadt, who has played center all season, skated at left wing today beside Dylan Cozens and Kyle Okposo.

“We all see it,” Granato said of Mittelstadt. “He’s not himself yet. He’s pushing hard, he’s working hard. There’s no doubt in my mind that he is, but he hasn’t played a lot of hockey in the last seven to 10 months. And other guys are in midseason form and he’s not. The injury was in the midsection, which is the core, and that moves everything, your core is everything, especially in hockey. So it’s taking him time.

“I think that his biggest challenge is to deal with the frustration with his personally high standard; he has a high standard and high expectations of himself and he’s going to battle it right now because he just can’t physically do yet what he could do before the injury, before the recovery. But … he’s getting better each game.”

With Mittelstadt at wing, Peyton Krebs moved to center between Rasmus Asplund and Victor Olofsson.

Amerks coach Seth Appert said today that center Brandon Biro, who made his NHL debut last Wednesday, will be sidelined at least four weeks with a lower-body injury.