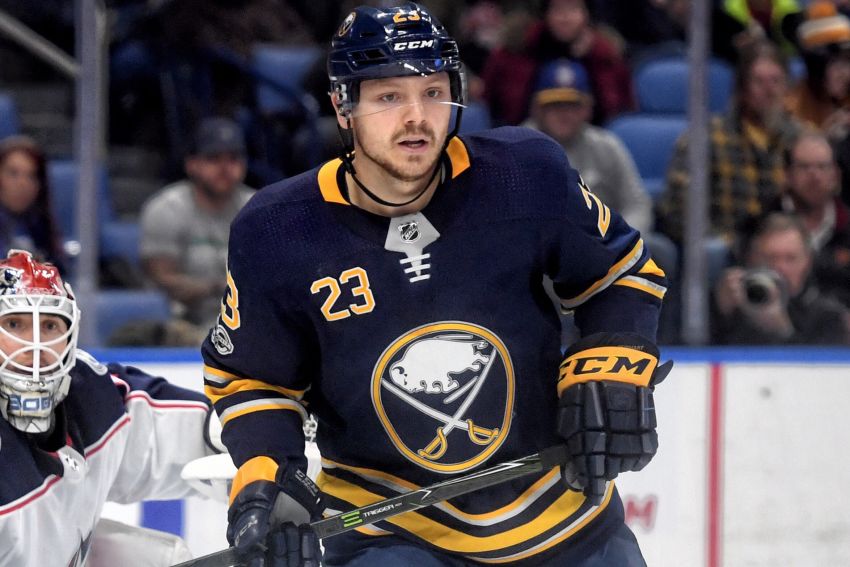 BUFFALO – Sam Reinhart’s short time back in Vancouver tested his patience, even made the Sabres winger miserable.

Sitting at home as a contract holdout can do that, especially when your teammates start a training camp filled with so much optimism.

“It was probably one of the most challenging week and a halves that I’ve been a part of,” Reinhart said following Thursday’s session of training camp.

By Tuesday night, as the Sabres played an exhibition contest against the Pittsburgh Penguins, an antsy Reinhart began looking for flights to Buffalo. On Wednesday morning, he signed a two-year, $7.6 million deal.

On Thursday, Reinhart, a two-time 20-goal scorer, rejoined his teammates for practice inside HarborCenter.

“It wasn’t easy,” Reinhart said of his holdout. “I think my dad’s probably the happiest guy to get me out of the house again.”

Reinhart, 22, said even his trainers could tell he was flustered. He spent his time at home skating with the University of British Columbia Thunderbirds. While he was grateful for that, nothing can compare to being back beside your teammates.

“At the time it probably seemed like two years being away, but now it seems like two days,” Reinhart said. “I’m thrilled to be back.”

He added: “It was the first time I’ve really had to experience that business side of (hockey).”

Reinhart practiced at right wing beside center Patrik Berglund and Evan Rodrigues on Thursday. He almost certainly won’t play in tonight’s road tilt against the Toronto Maple Leafs, the start of a preseason home-and-home series. But given Reinhart’s strong conditioning, he could dress for Saturday’s game.

Reinhart credits the skating and other work he did in Buffalo before camp started for allowing him to jump into practice so easily.

“It just feels like I missed a few days and I’m right back with the team,” he said.

“I understand coming off and signing a new deal, you’re going to have that adrenaline,” Housley said. “It’s the second and third day we’re looking at for him to see where he is. But I was really pleased with his pace and execution.”

Fresh off a 25-goal, 50-point season, Reinhart is expected to be a major contributor to the Sabres. Getting him into camp was imperative.

“The fact that we kept communication going was probably one of the reasons we came to a deal now versus having to wait for the start of the season,” Sabres general manager Jason Botterill said. “Both sides realized the importance of a young player being a part of training camp. “

Reinhart has already compiled 65 goals and 140 points in his first 249 NHL appearances. Last season, after a wretched start, he performed like a star, scoring 18 goals and 37 points in the final 38 games.

Remember, Reinhart, who has developed into a terrific net-front presence, did not score his sixth goal until Jan. 1. How did he suddenly turn around his season?

“His puck possession,” Botterill said. “Sam’s always had great hockey sense and skill. I thought he just got onto pucks a little bit quicker and just had the puck on his stick a lot more in the offensive zone.

“Probably something I didn’t realize before coming to Buffalo here is how much time and how good he was around the net.”

Reinhart knows how lethal he can be around the net. Right now, the former second overall pick is still brimming with the confidence he built last season.

“I know the player I can be, I know how I was able to turn things around,” Reinhart said. “I think just keeping that confidence, just keeping that self-belief goes a long way in my game. I think it was important for me to get back as soon as possible because training camp is a really important time to get that.”

Reinhart said he wants to stay with the Sabres “as long as possible.”

“Whether it was a one-year or an eight-year (contract), it’s not changing my mentality,” he said. “That’s not who I am. My focus, my excitement is here with this group of guys and I want to be part of the solution.”