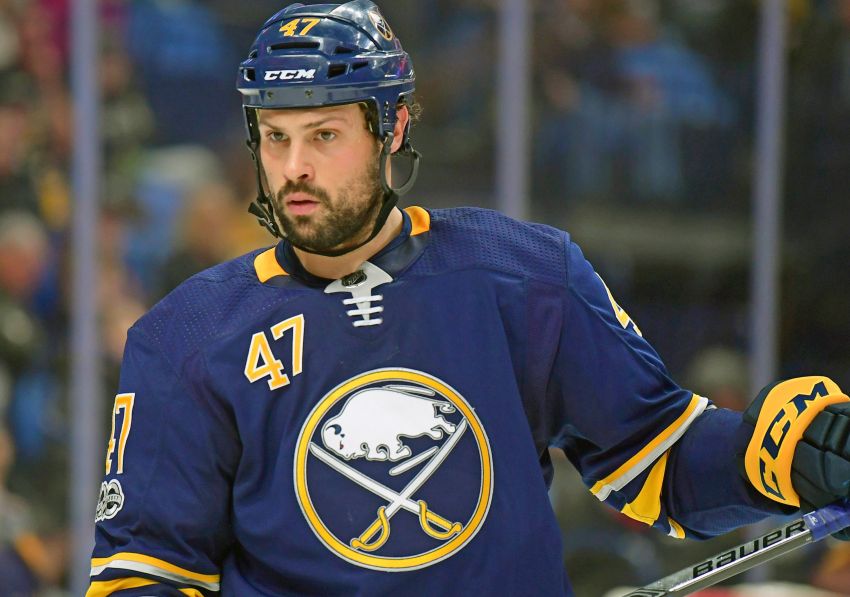 PITTSBURGH – In an otherwise awful weekend, defenseman Zach Bogosian emerged as one of the Buffalo Sabres’ few bright spots.

Following a two-month absence, an aggressive Bogosian boosted the Sabres’ feeble blue line, showing no effects of his lower-body injury.

“He’s been our best defenseman for two nights after missing 25 games, stepping in like this and providing energy,” Sabres coach Phil Housley said following Saturday’s 5-1 loss to the Penguins inside PPG Paints Arena.

In his first real action since April, Bogosian played more than 38 total minutes, including 20 minutes, 48 seconds in Friday’s 4-0 home loss to the Penguins.

“It felt nice to be back,” said Bogosian, who was injured in the preseason finale Sept. 29. “It’s tough to sit out the time that I did, it’s tough to see the team go through what we’re going through (watching) up in the press box.”

Challenging one of the NHL’s top heavyweights resonated with his coach and teammates.

“Stepping up to the plate like he did tonight against Reeves, he’s probably one of the toughest guys in the league, says a lot about him just trying to provide a boost and providing energy for our team,” Housley said. “(It) was a terrific job on his part.”

Still, the Sabres lost their fourth straight game. They’ve fallen apart recently, dropping 11 of their last 12 contests. They just got shut out in three straight games.

Their defense corps has been perhaps the NHL’s worst this season. Incredibly, 11 defensemen have combined for zero goals and 24 assists.

Yes, at the 27-game mark, a defenseman still hasn’t scored.

For once, the defense created some offense. The slick Bogosian’s presence certainly helped. He had four shots Friday and two more Saturday.

If Bogosian can stay healthy, he could help stabilize the defense. Of course, that’s a big if.

Since joining the Sabres in February 2015, the Massena native has missed 76 games.

After years of battling injuries and often underachieving, this is supposed to be Bogosian’s breakout season. He seems energized by Housley’s presence.

If anyone can get the best out of Bogosian, the third overall pick in 2008, it might be the Hall of Fame defenseman.

About two hours before his season debut Saturday, Sabres winger Hudson Fasching made a promise.

“I will definitely be around the net tonight,” he said.

The Sabres recalled Fasching, 22, so he could get his 6-foot-3, 204-pound frame to the net. The youngster did early and often, although 7:45 into the game he was whistled for goalie interference.

“I really liked his game, he showed some speed, hungry to get to the net,” Housley said. “I wish he wouldn’t have taken that first penalty. We sort of got on our heels after all those (three) penalties in the first period, but then we got it back and settled into the game.

“But he’s getting to the net hard and he was playing really well down low in the offensive zone, being hard to play against. It’s a good sign.”