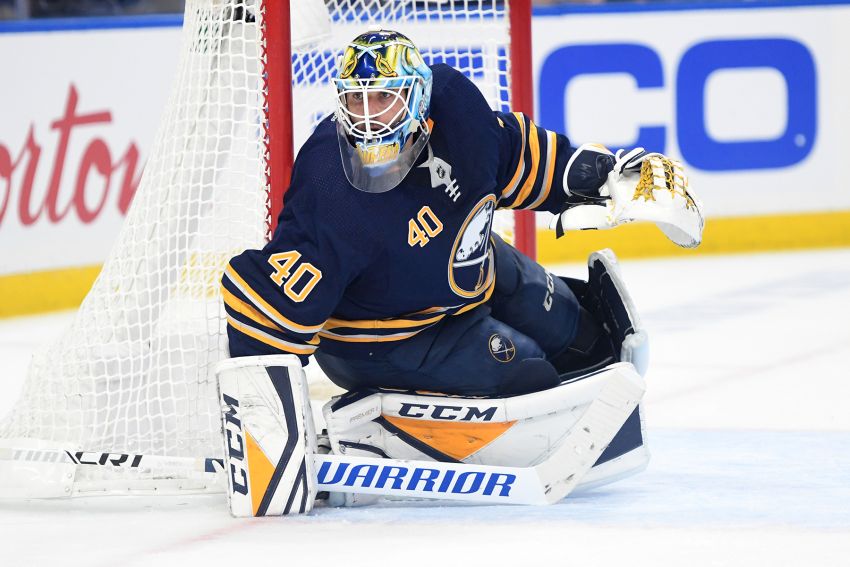 BUFFALO – Carter Hutton’s grip on the starting job isn’t exactly firm. Following a strong start, the Sabres goalie had cooled off a bit in recent outings before Tuesday’s stellar effort in a 2-1 overtime loss to the Calgary Flames.

While Hutton, 32, has handled the load early, playing nine of the first 12 games, he has competition from backup Linus Ullmark, who has looked impressive in limited action.

Hutton began Tuesday sporting an awful .877 save percentage in his last five appearances. If he had played performed poorly, Sabres coach Phil Housley might’ve turned to Ullmark, 25, next game.

But Hutton dazzled throughout the night, stopping the first 35 shots Calgary pumped on him before the 15,196 fans inside KeyBank Center. He bailed the Sabres out, putting them on the precipice of a win they truly did not deserve before Johnny Gaudreau’s overtime goal.

“We obviously got to close games out,” a surly Hutton said. “We played with fire too many times.”

The Sabres, who went up 1-0 late in the first period, finally cracked with 55.3 seconds left in regulation. With Flames goalie David Rittich on the bench, Matthew Tkachuk redirected Elias Lindholm’s one-timer from the left circle after it deflected off Sabres defenseman Rasmus Ristolainen.

The Sabres then frittered away a power play to start overtime before Gaudreau connected on Mark Giordano’s return feed on a two-on-one with 2:20 left.

“I just feel bad for him,” Housley said. “He’s really given us some really good, solid goaltending and been asked to stand on his head. It’s unfortunate, because even though we didn’t play up to our capability and it was sloppy and we looked slow at times, we were disconnected, we didn’t play as a team, he still gave us an opportunity.”

He added: “Even though we didn’t play up to our standard, we had a chance to win a hockey game.”

Still, the Sabres, who lost 5-4 in overtime Saturday in Columbus. earned a single point. They’re 3-0-2 in their last five games and haven’t lost in regulation since Oct. 18.

Incredibly, the Sabres hadn’t earned a point in five straight contests since a nine-game run from March 10 to 27, 2012.

But after two straight losses, the Sabres, one of the NHL’s biggest surprises in October, are slumping a bit again.

“We didn’t play well,” said captain Jack Eichel, who scored the Sabres’ only goal, ending an eight-game drought. “Obviously, they outplayed us and we didn’t deserve to win that game.”

Eichel, who has five goals and 12 points in 11 games this season, said the Sabres sat back too much late.

“I thought there wasn’t enough compete and enough fire,” Eichel said. “We were sloppy. I thought at times we were OK in the O-zone, but I thought we relied on our goalie too much.”

Overall, Hutton’s numbers – 4-4-1 with a 2.94 goals-against average and a .910 save percentage – are nothing special. But at times, especially early on and Tuesday, he has been the Sabres’ backbone.

“I think I’ve been pretty good so far this year,” Hutton said when asked if he felt better about Tuesday’s performance than his previous few outings. “Truthfully, I think you guys criticize me a lot for one or two goals. Even the games I lost on the (California) trip I thought I was a big difference-maker. You guys have your opinion, I have mine.”

Most would agree Hutton’s paddle save on Lindholm 44 seconds into the second period was spectacular. With Lindholm about the bury the puck into an open net, Hutton reached over and extended his arm to stymie the chance before the referee whistled the play dead.

Eichel previously went eight games without a goal one time earlier in his career. Winger Jason Pominville assisted on his goal, his 500th point with the Sabres, tying him for ninth in franchise history with Danny Gare.