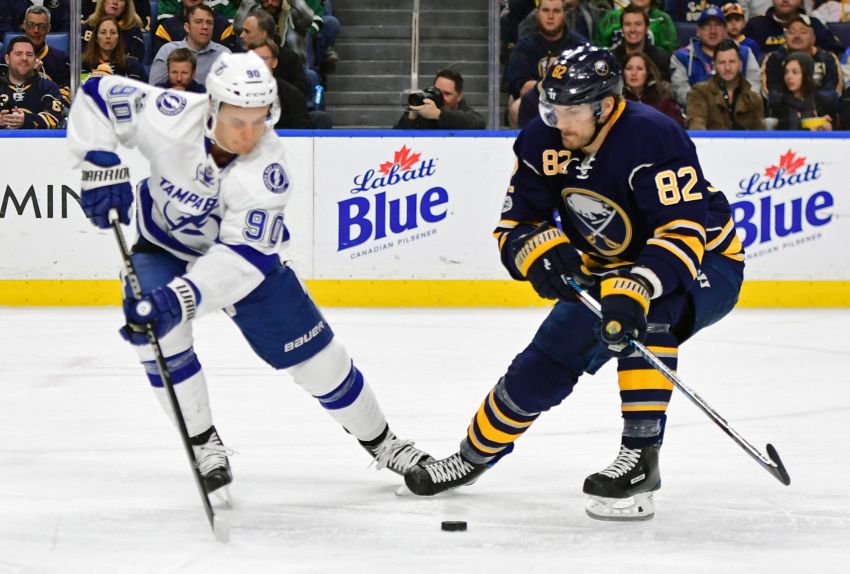 BUFFALO – Technically, the Sabres are still alive in the playoff chase. Thanks to seven losses in eight games, it only seems like they’ve been eliminated.

But realistically, the seventh-place Sabres are finished. They must climb four teams and make up at least seven points to reach the final wild card spot.

The odds of that happening? Try 0.2 percent, according to sportclubstats.com.

Fifteen games are left, starting with tonight’s road tilt against the Columbus Blue Jackets. The Sabres, of course, haven’t given up on the playoffs. Still, they probably know they’ll miss again, extending their franchise-record streak to six seasons.

That means the last month is about – you guessed it – playing for pride.

“We’re still trying to win hockey games and we’re still trying to get points, climb in the standings,” Sabres coach Dan Bylsma said Thursday following practice inside HarborCenter. “We have a lot to prove in the last 15 games with who we are and how we’re going to play this, and pride is a big factor.”

The Sabres want to use the final stretch to establish an identity.

The Sabres, despite their weak standing, have shown they can be a difficult opponent. They have earned 15 of their 27 wins against teams currently in playoff spots.

“We’ve played certain teams, good teams, and done well against them,” Bylsma said. “It is a sign. … You can’t play the New York Rangers and beat them like we have, the Ottawa Senators and where they’re at. We can’t play the games we’ve played and not see how good we can be.”

What kind of identity have the Sabres showcased throughout those contests?

“We’re physical, we’re quick, we’re tenacious, we’re mostly in the offensive zone a lot,” Sabres winger Marcus Foligno said. “It’s physical hockey. It’s got to be fast hockey. It’s a team that doesn’t give up. I think we try to go right to the end.

“Obviously, we’ve had some slow starts, some bad periods. But it’s got to be a full 60 from us. That’s when we’re at our best.”

Sabres defenseman Cody Franson said: “Our identity is that we’re a hardworking team. We had a hiccup in the last few, but I think when teams think of playing Buffalo, you’re going to have to work. We’ve got holes in our game like everybody else does, we’re a work in progress more so than we should be right now.”

The Sabres have been terrible lately. They’re 1-5-2 since briefly getting into the thick of the playoff chase before their bye two weeks ago. In Tuesday’s 6-3 loss to Philadelphia, they looked awful, allowing six even-strength goals.

“The Philadelphia game was a rough one, obviously not our greatest effort,” Foligno said. “We got schooled for it. We got 15 games. Every game’s huge. It’s got to be the identity of our team that comes out in these next 15 games.”

The Sabres get the Blue Jackets, a quiet powerhouse coached by fiery former Buffalo assistant John Tortorella, tonight and Saturday at home. The teams haven’t met yet this season.

They don’t have a star-laden roster. Their top scorers, for example, are Cam Atkinson and Alexander Wennberg. But their tenacious style, Bylsma said, has turned them into “a dangerous offensive team.”

“They’re really one of the most aggressive teams, physical teams, heavy forecheck teams than anybody we’ve seen,” he said.

“They’re obviously at the top of the standings for a reason,” Franson said. “They’re a team that’s going to make us earn what we get. We got to manage the puck well, not feed into their transition game. They’re not going to give up much defensively, so we got to bury the chances we do create.”