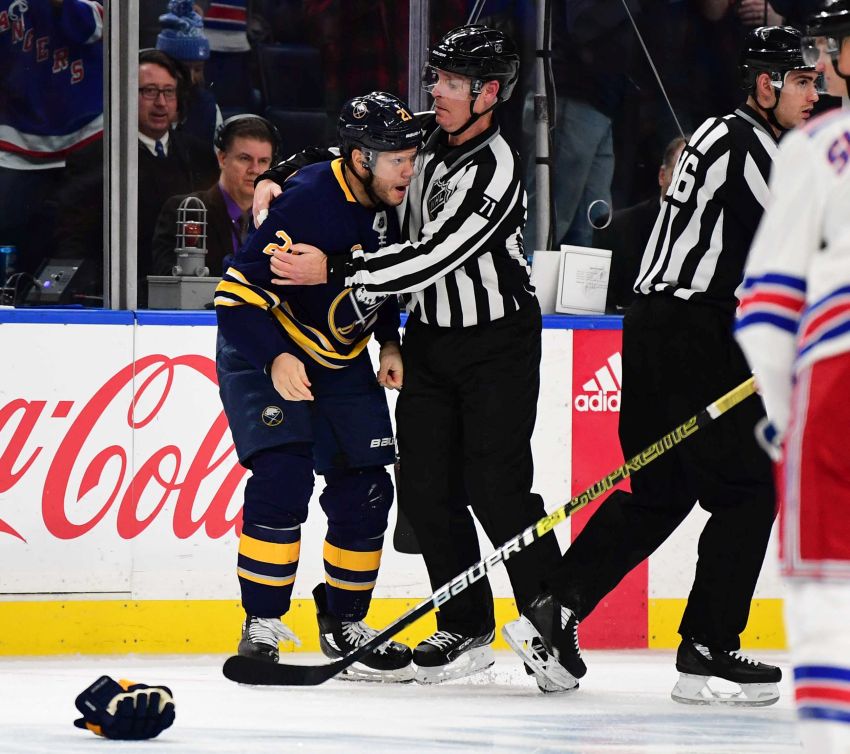 After returning to Buffalo to undergo further evaluation, winger Kyle Okposo has been diagnosed with a concussion, the Sabres announced this morning.

Sabres coach Phil Housley told reporters in Florida there is no timetable for Okposo’s return.

“I just want to be cautious with Kyle,” Housley said inside the BB&T Center.

Okposo, 30, has a concerning history of concussions. This is at least his third in less than two years. After suffering one late in 2016-17, he was hospitalized in intensive care.

Okposo, who suffered a one-punch knockdown during a brief fight Friday, accompanied the Sabres on their three-game road trip before leaving for more examination.

The atmosphere inside KeyBank Center changed dramatically after Okposo fought New York Rangers defenseman Tony DeAngelo, who was upset the veteran had hit teammate Mats Zuccarello, late in the 6-2 loss.

Okposo, who rarely fights, left the game bleeding around the mouth.

Housley said Saturday Okposo did not have a concussion. Okposo did not practice Saturday or play in Sunday’s 4-1 road loss to the New Jersey Devils. He did, however, skate with some teammates Sunday morning.

Did Okposo experience symptoms after going on the ice?

“They were in total contact with the doctors,” replied Housley, who mentioned a few times the team’s doctors stayed in contact with Okposo. “They felt best just to bring him back to Buffalo and reevaluate him.”

Just traveling with the Sabres appeared to be a positive sign for Okposo, who’s in the third season of a seven-year, $42 million contract.

The former NHL All-Star played 76 games last season. He missed action in March after suffering a concussion when he collided with Ottawa’s Bobby Ryan.

Okposo has compiled 10 goals and 22 points in 57 games this season.