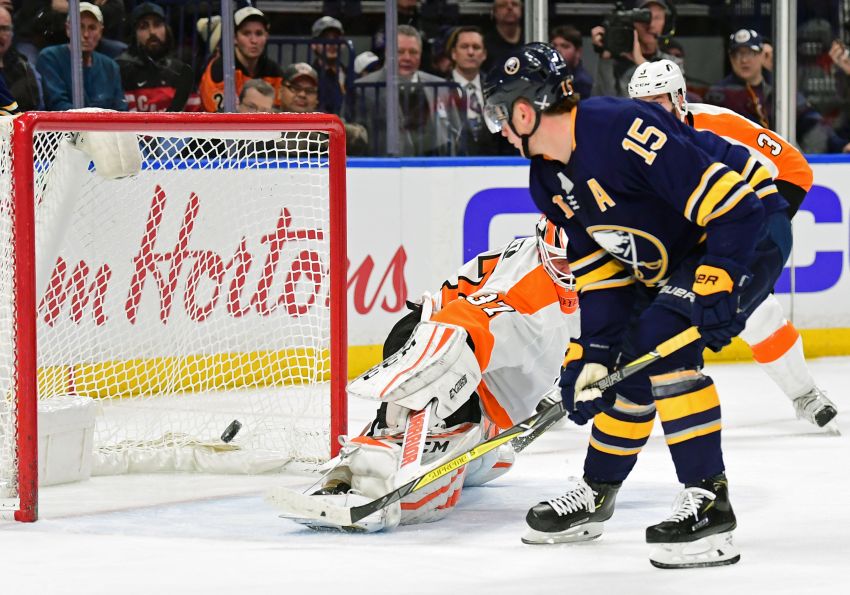 BUFFALO – Phil Housley often talks about the shot mentality he wants the Sabres to possess. To the coach, pumping the puck on net from any angle is usually a good idea.

“It sounds so simple,” Housley said following Friday’s 4-2 win against the Philadelphia Flyers.

In reality, it’s not simple at all. Players’ instincts often tell them to hold the puck until a strong opportunity materializes.

The puck deflected in off Elliott, giving the Sabres a lead they wouldn’t relinquish before the crowd of 18,222 inside KeyBank Center.

“From those angles, you never know,” O’Reilly said.

O’Reilly simply showcased what Housley has preached all season.

“To stick with it and to keep throwing them with traffic, yeah, that’s what they’ve been telling us to do and it was nice to see it work tonight,” O’Reilly said.

The goal sparked the NHL’s lowest-scoring team and gave them some confidence, O’Reilly said.

“We were finding a lot of shots from the point, from bad angles, and Ryan’s goal is a result of just getting it in there,” Housley said.

The Flyers made it interesting, getting to within a goal twice. Center Jack Eichel responded by scoring an empty-net goal both times, becoming the first Sabre to score into an open cage twice, according to the Elias Sports Bureau.

“You got to take them when you can,” he said.

For one of the few times this season, the Sabres provided some support for goalie Robin Lehner. In 14 home appearances, Lehner’s 1.94 goals-against average and .935 save percentage both lead the NHL.

Still, Lehner earned only his fifth home win. The Sabres began the night averaging just 1.5 goals a game for him here.

“He’s been outstanding,” O’Reilly said. “He’s been our best player, he’s showing up every night giving us a chance to win and we haven’t been scoring enough. There’s not nearly enough goals.”

Housley said: “All the games he’s played recently on home ice, he’s given us a chance to win every time he’s getting in between the pipes. We finally got some goal support for him.”

Early on, Elliott stymied the Sabres, who had 16 shots during the first period. Unlike other games they’ve started strongly without scoring – for example, Tuesday’s 3-0 loss to the Boston Bruins, the Sabres’ third straight setback – they never became frustrated.

“I give credit to our guys because we’ve been in that position before where nothing’s going in and (it becomes) ‘here we go again’ so to speak,” Housley said. “But they stuck with it. I kept telling them to keep throwing pucks at the net, it’s going to happen and we finally broke through. We didn’t get away from what were talking about.”

O’Reilly said the Sabres had “much more consistent effort.”

“We had a good start,” he said. “We talked in the room about sticking with it and keep doing the things we’re doing well. … We got rewarded in the third from it. We got some good bounces there that gave us a spark.”

The Sabres almost had a spark just 3:42 into the game, but Elliott stopped Kane on a penalty shot.

Friday’s game was the Sabres’ last at KeyBank Center until Jan. 9. Starting with tonight’s contest against the Carolina Hurricanes, their final outing before a three-day Christmas break, they play the next seven contests away.

The Sabres, however, are the home team for the Winter Classic on New Year’s Day against the New York Rangers at Citi Field.