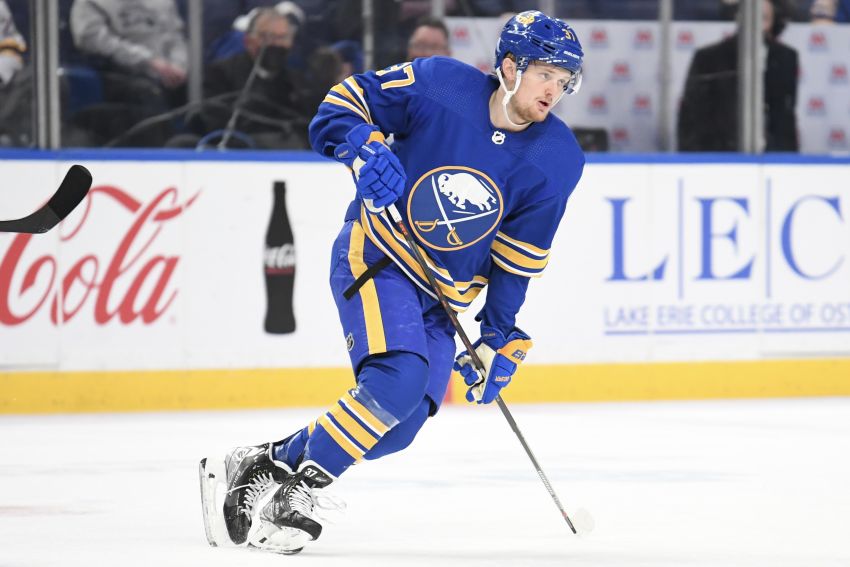 TORONTO – Casey Mittelstadt admittedly isn’t the most patient guy. Coach Don Granato has often spoken about how the Sabres forward has high expectations for himself.

“Yeah, I’m hard on myself,” Mittelstadt said prior to recording an assist in Wednesday’s 5-1 win over the Maple Leafs at Scotiabank Arena. “But at the same time, I think that helps me.”

Four and a half months into what was expected to be a breakout season, two significant upper-body injuries have limited Mittelstadt to just 13 games. Since returning to the lineup Feb. 19, he has struggled, looking little like his normal self while recording two assists.

Mittelstadt, who underwent surgery in early December, said regaining his timing has been difficult. Most guys have been playing all season, while he’s just getting going again. He said he sometimes catches himself a step behind or ahead of the play.

Of course, Mittelstadt is frustrated. Fresh off a terrific finish last season, he emerged from training camp as Buffalo’s No. 1 center.

“Visibly you see (his frustration) and then in his game, taking maybe a shortcut here and there because he’s not moving as well yet,” Granato said. “You take shortcuts instead of being efficient and he’s got caught a couple times in games.”

Still, Granato said he sees Mittelstadt, 23, improving each day – “He looks even better this morning,” he said – and getting his legs and mobility back.

“He’ll get back to his game,” Granato said. “That’s just his standard. It’s just been taking more and more time than he’d like.”

To help him, Granato has shifted him to left wing, a position he played early last season before moving back to center, his natural spot.

Mittelstadt played beside center Dylan Cozens and Kyle Okposo against the Leafs.

“It hasn’t been the easiest for me coming back,” said Mittelstadt, who has compiled one goal and four points this season. “Obviously, there’s been some struggles. It’ll be nice to have the game slow down a little bit on the wing.”

Granato wants Mittelstadt, the eighth overall pick in 2017, to adapt and become a player who can contribute in games when he’s doesn’t feel like himself.

“You’re not going to be on 82 games, and even in a seven-game playoff series,” Granato said. “So the days you’re not on, to still be effective, somehow find a way to be effective. And that’s a challenge for not only him, but for our team because you have so many young guys. That’s where a player like Kyle Okposo, that’s his experience, he can do it. He doesn’t have it every night but he brings something every night.”

Sabres defenseman Colin Miller, out the last 18 games, skated with his teammates Wednesday morning for the first time since undergoing surgery in mid-January to repair an upper-body injury.

Notes: The Sabres utilized the same lineup as they did in Sunday afternoon’s 4-2 loss to the Dallas Stars, scratching center Mark Jankowski. … Wednesday’s game was the Sabres’ first in Toronto since Dec. 17, 2019. … Leafs winger Wayne Simmonds played his 999th NHL game Wednesday. Simmonds, 33, played seven contests for the Sabres in 2019-20 after they acquired him before the trade deadline.