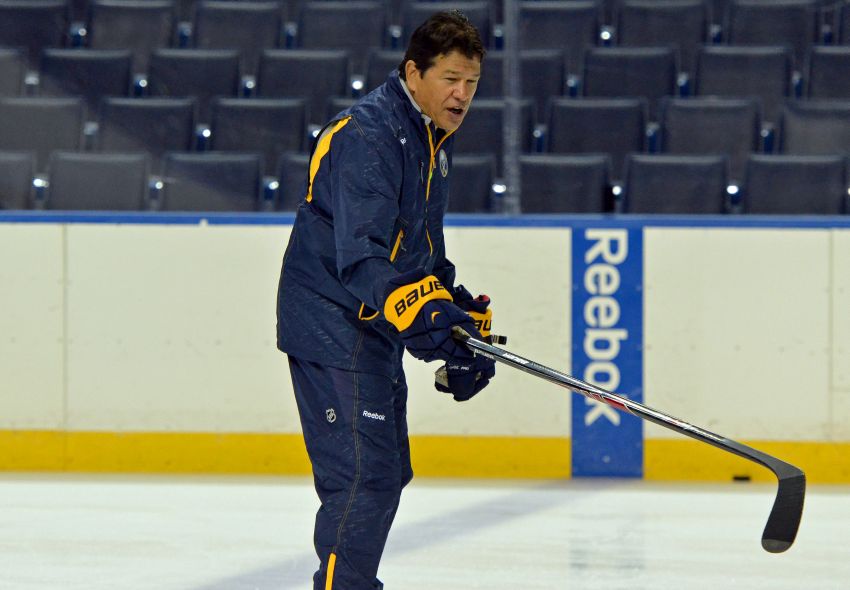 BUFFALO – Ted Nolan refers to the shootout as a “skills competition.” So, the Sabres coach doesn’t like it then?

“Ehhh, I’m not a big fan of it,” Nolan said this afternoon inside the First Niagara Center. “But it’s entertaining for the fans. The game, I like to declare a winner. It’s kind of like horseshoes or grenades, everything’s close, everybody’s fair. But I think in a game you should have one winner.”

The Sabres lost a 2-1 shootout to Montreal on Wednesday, their sixth point in the last six games. The Sabres won a 3-2 shootout against Detroit on Sunday.

Slowly, the Sabres are building some momentum.

“I think the thing we really wanted to establish was the effort,” Nolan said. “Once we get the effort, that’s our foundation, and then we can execution to get that. It took long so long to get that effort. We’re getting it right now. The guys are working extremely hard. Now, we just got to execute on certain things.”

In lineup news, Nolan said goalie Jhonas Enroth will start Friday against Edmonton. Meanwhile, banged-up winger Marcus Foligno will miss his third game Friday. He skated on his own today and could play Saturday.

Winger Patrick Kaleta, out since a shot hit him in the face Sept. 28, is “getting closer and closer,” Nolan said.

“Today he got so close he broke a couple of sticks in practice,” Nolan said. “The frustration is getting more. But we still got to wait for the doctor to get 100 percent OK.”

Nolan said the Sabres will make one change on defense Friday.

In other news, Nolan awarded winger Nick Deslauriers, a fourth-liner all season, a spot on the left wing beside center Cody Hodgson and Drew Stafford today.

“It creates more energy on our team,” Nolan said. “The one thing he does bring is some energy.”

Related: Sabres give strong effort, fall to Canadiens in shootout