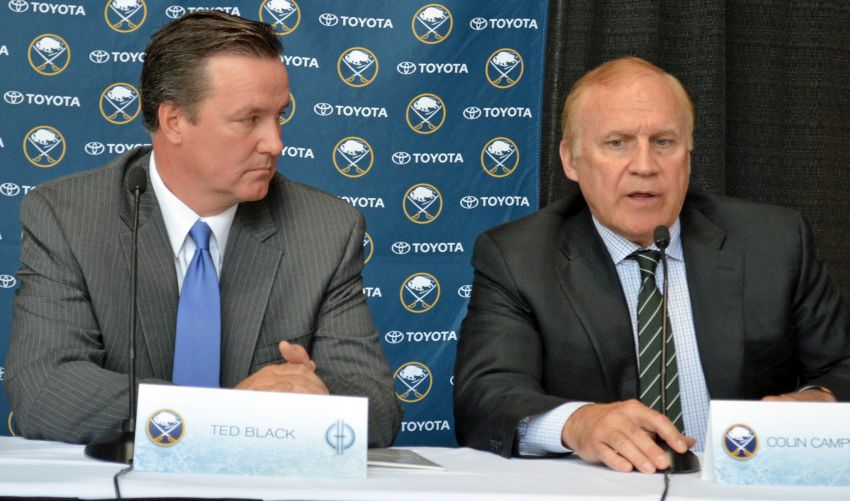 BUFFALO – To Colin Campbell, who’s spent his life in hockey as a player, coach and executive, this city has a special place in the game.

“Buffalo, for a lot of hockey people, is almost like an Original Six team,” Campbell, the senior executive vice president of NHL Hockey Operations, said Monday in announcing the Sabres had landed the NHL Scouting Combine. “It’s been here for a long time, a lot of history here and a lot of things have happened here over the years.”

If the Sabres have their way, more marquee events will be happening here in the future. They have the combine for the next two years at HarborCenter, the $172 million facility adjacent to the First Niagara Center scheduled to open in October.

The Sabres have submitted a bid for the 2016 NHL Entry Draft, team president Ted Black said. They want the NHL All-Star Game someday. They also plan to pursue the 2018 world junior championship “very aggressively,” he said. The Sabres hosted the event in 2011.

“We want everyone to come through Buffalo, and that’s what we’re building here, on and off the ice,” Black said.

When Terry and Kim Pegula bought the Sabres in 2011, the owners and Black “wanted to transform Buffalo into a premier hockey destination.”

“But we also wanted to transform the perception and image of Buffalo,” Black said. “We set a goal to make Buffalo at every level hockey heaven.”

Before the combine could move, NHL commissioner Gary Bettman told Campbell the league had to give all 30 teams a crack at the event.

“We had a lot of interest,” Campbell said.

“Buffalo was heads and tails above everyone else,” Campbell said.

Having HarborCenter, which will give the Sabres the NHL’s only three-ice surface facility, was an advantage. So were the city’s respected medical facilities. For the first time, teams will be able do off-site medical testing.

The Sabres snatched the combine from Mississauga, a city just outside Toronto.

The Sabres went after the combine, which allows teams to evaluate around 100 draft-eligible prospects up close, about two years ago.

Campbell said “there’s a good chance” the Sabres will keep the combine more than two years. He’s clearly impressed with the organization’s plan.

The Sabres hosted an officiating development camp recently, and Campbell believes Buffalo could be a good place to start an “officiating center of excellence” someday.

In addition, Team USA will be playing its second All-American Prospects Game next month inside the First Niagara Center.

Campbell said there’s no timetable for a 2016 draft announcement.

“There’s always a lot of competition to hold the draft,” he said.

The Sabres hosted one All-Star Game, in 1978 at Memorial Auditorium.

“I’d like to because it hasn’t been here in forever, (1978),” Black said. “Gilbert Perreault played in it. So I think that’s something we want to do.”

Campbell said “a slight adjustment” has been made to the league’s draft lottery, “but not the adjustment that certain teams were looking for.”

“I don’t think it’s big enough that it’s going to make that big of a difference, in my own opinion,” he said.

He added: “I think it’s not broke, don’t fix it. It’s worked the way it’s supposed to work.”

Sabres general manager Tim Murray said in June the odds of league’s worst team getting the No. 1 pick could drop from 25 percent to about 19 or 20 percent. The tradeoff was the 30th team couldn’t fall past the No. 2 spot.

The Sabres, the NHL’s worst team last season, picked second in June. They have three first-round selections next year.