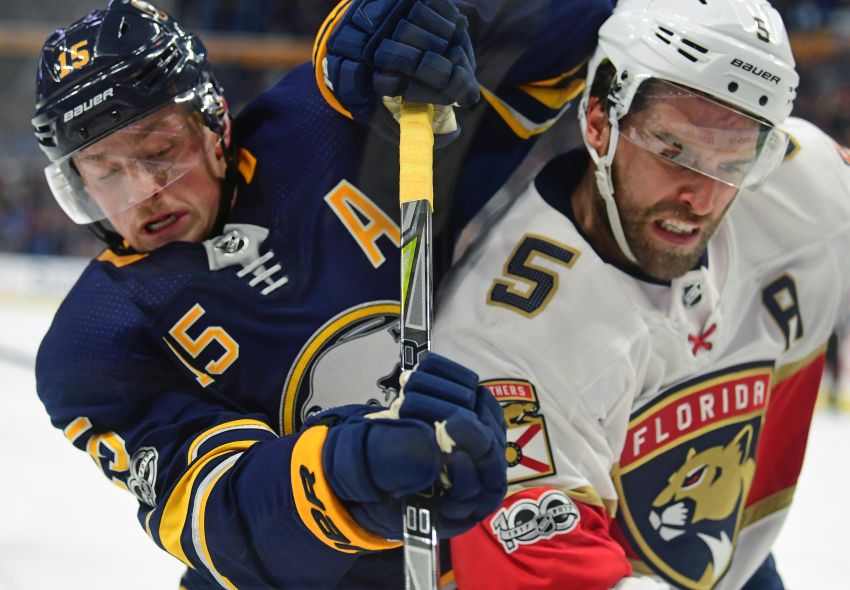 BUFFALO – Friday’s ugly 4-1 loss to the hapless Florida Panthers should erase any belief the Sabres are a better team than their meager record indicates.

The loss, the Sabres’ 11th in 16 tries (5-9-2), dropped them below the Panthers into last place in the 16-team Eastern Conference, a spot they have occupied regularly for years.

“It’s what the record says, it’s what we are,” Sabres winger Kyle Okposo said bluntly. “There’s no bones about it. We are where we are for a reason and we got to realize it and try to get better every day. It’s been a lot of learning experiences this year. I’m sick of learning experiences, it’s not fun. We got to be better on a nightly basis.”

On Friday night, at least the Sabres hung around. The Panthers scored two empty-netters, so it was a one-goal contest late.

Still, the Panthers thoroughly outplayed the Sabres after Okposo’s first-period power-play goal, dumping the puck in and wearing out the Buffalo defense. The Sabres looked nothing like the team that stymied the Washington Capitals in Tuesday’s 3-1 victory.

“We were coming off a really good game and we lay an egg for the last 40 minutes,” Okposo said. “We just got to find a way to be more consistent. I think it’s everybody, especially our forwards. I think we bear the responsibility of that game tonight.

“We didn’t manage the puck, we weren’t hard enough to play against down low, we let our D get plastered all night.”

Sabres center Jack Eichel assumed responsibility after the game, acknowledging he performed poorly. The third-year star, who’s in a seven-game goal drought, was a minus-3 on Friday, often forcing plays.

“He means so well that it comes back against him, and now he’s spending his energy getting back into the defensive zone and spending the wrong energy down there defending.”

“We didn’t pay the price to get into the interior,” Housley said. “We had a lot of opportunities from the point to shoot pucks.”

The Sabres had an opportunity enjoy a late power play when Michael Haley high-sticked winger Zemgus Girgensons in the face 9:09 into the third period. But winger Jordan Nolan fought Haley, earning a roughing penalty that negated the man advantage.

“He’s making the right choices, he’s sticking up for his teammate at an important time in the game,” Housley said. “So I’m glad that he did it.”

The Sabres play a road game tonight against the Montreal Canadiens.