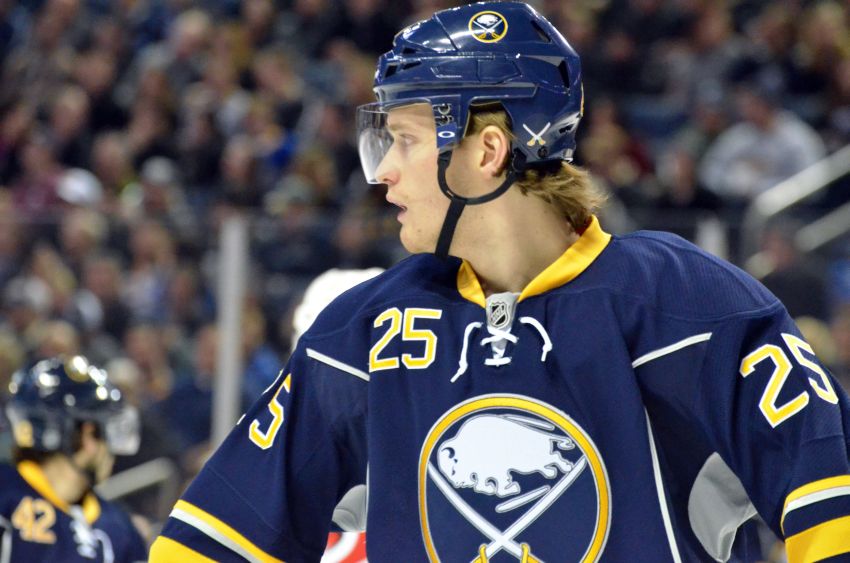 The Russian has one goal, five points and minus-2 rating in 22 games this season. He has recently played sparingly or been a healthy scratch.

The Sabres had to make a roster move with winger Ville Leino (hip) returning Saturday.

Update: Here are some comments from general manager Darcy Regier on the decision.

“We’ve been talking about this a while. This is an opportunity for him to keep growing and building on his experience here, building on the start in the Quebec League. He had a terrific world junior tournament. He surprised all of us by being here for the length of time he has been here, and depending how far they go in the playoffs, he will be here after the season.”

On the expectations they had for him:

“It was first playing. We wanted to give him an opportunity to see whether or not he could really … it was about whether or not he was going to be able to get his minutes up to a level where he could continue to develop. Really where he ended up and really what drove the decision was we were really using him in a fourth-line type role where we were hoping to get him in to create some offense.”

On going back to Quebec:

“In the end, he’s got an opportunity to go back to Quebec, be the go-to guy, play 20 to 22 minutes. He’s got a terrific coach there in Patrick Roy. I’ve had a number of conversations with Patrick over the last few weeks and today again.””

On the NHL adjustment:

“You have to learn to play more hockey in your shift. These kids are used to having the puck a lot with their junior teams, and they’re very good when they do have the puck. It’s when they don’t have the puck when most of the learning takes place, combined with getting stronger and getting faster, and those are all normal things we deal with with young players.

“It was an experiment. There certainly are benefits. He certainly has a very good understanding of what it takes to play in the National Hockey League going forward. I think it’s very important, and he agreed, that he spend as much time as possible here in the offseason training and preparing for next season.”

One thought on “Sabres send Grigorenko back to junior”