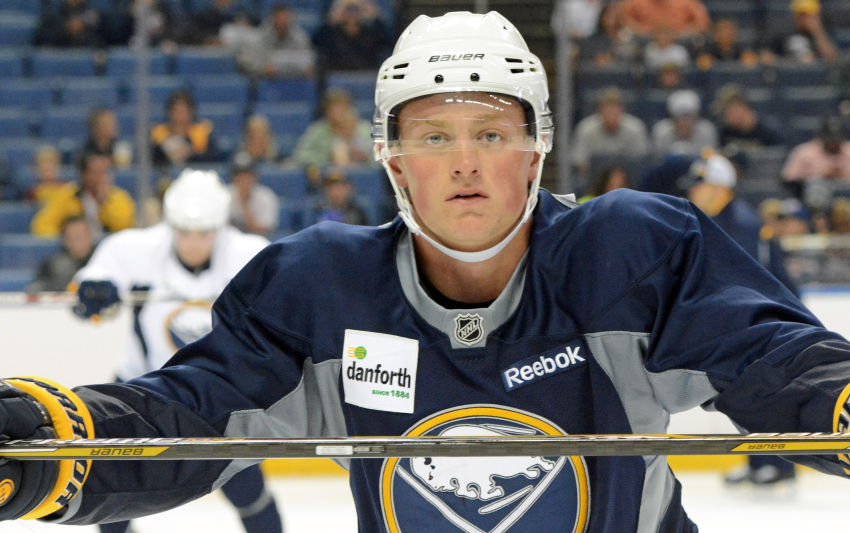 TORONTO – The Summer of Jack is almost over. Believe it or not, in 10 days, Jack Eichel will be in a Buffalo Sabres uniform for a rookie camp prospects game against the New Jersey Devils, officially ending what the phenom called a “whirlwind” offseason.

“I think it’s starting to get real,” Eichel, the second overall pick, said Tuesday at the NHLPA Rookie Showcase inside Mattamy Athletic Centre, site of the old Maple Leaf Gardens.

Eichel’s offseason has been exhausting. He represented Team USA in the world championship, participated in the NHL Combine, did an extensive press tour prior to the draft and then skated in Buffalo’s development camp.

When everything ended in July, the 18-year-old center took a week off to relax before he resumed his training regimen, which now includes boxing. He said he’s recently packed on about eight to 10 pounds.

At least Eichel got his living arrangements out of the way early.

After the Sabres drafted Eichel on June 26, veteran winger Matt Moulson congratulated him and then posed a surprising question.

The 31-year-old Moulson, one of the most experienced and accomplished Sabres, asked Eichel if he wanted to live with his wife, Alicia, and their two children during his rookie season. Eichel decided the offer would be “a really good move.”

“He’s obviously a really good guy,” Eichel said. “He’s been around the league. So I’m really excited about it. I think it’s a really good fit for me.”

Eichel, the Sabres’ biggest prospect in decades, will be under an enormous amount of pressure throughout the upcoming season. Having the respected Moulson close by should help him acclimate to the demands of NHL stardom.

Of course, Eichel still talks like there’s no guarantee he’ll be in Buffalo. For months he has spoken about earning his spot, something he repeated Tuesday.

He added: “I think everyone’s pretty excited about the upcoming year for the Sabres – the city of Buffalo, the organization, everyone around the organization is going in with a positive mind. It’s kind of a new look for us as an organization.”

Eichel’s offseason isn’t over quite yet. He has a rookie orientation later this week in Virginia. On Tuesday, Eichel was on the ice with 39 other rookies, sporting his NHL uniform for an Upper Deck photoshoot. Many of the pictures will be used on rookie cards throughout the upcoming season.

After signing an exclusive contract with Leaf Trading Cards on Monday, Eichel didn’t participate in the autograph portion of the event.

Months before his NHL debut, Eichel, who inked a deal to wear Bauer equipment last month, has become a coveted name for endorsements.

“The dream is happening, then everything starts to fall into place. You realize it’s reality,” Eichel said. “Things like that happen. People pay you for your autograph. It’s pretty neat.”