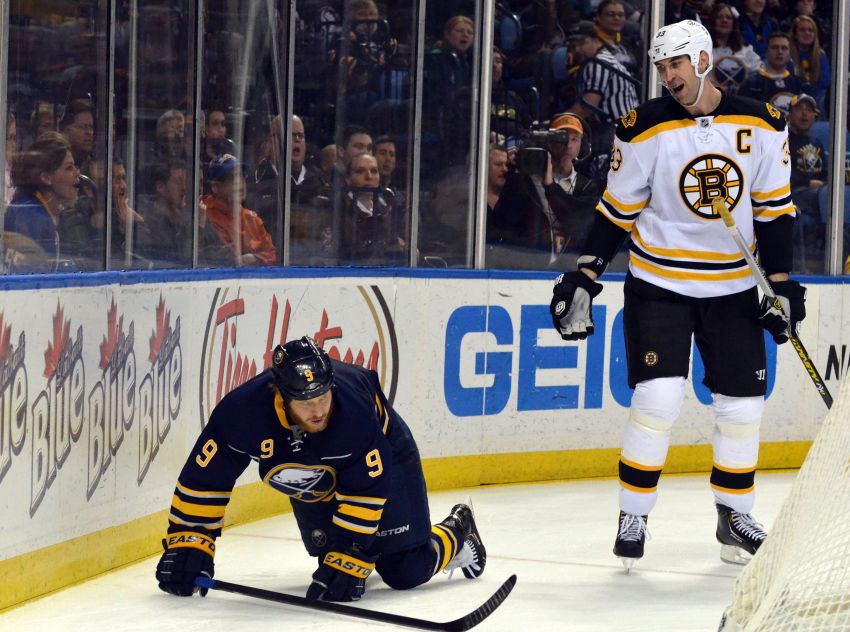 PITTSBURGH – At the 12:01 mark of the first period in the Buffalo Sabres’ 2-0 loss to Boston on Sunday, hulking Bruins defenseman Zdeno Chara cross-checked Steve Ott, sending the agitator flying into the boards.

“No, unless you want to launch yourself head-first into the boards as an embellishment,” Rolston said Monday inside the First Niagara Center after the Sabres prepared for tonight’s tilt against the Penguins. “I know Otter plays hard, but I’m not sure he’s going to actually do that to get a call.”

A banged-up Ott missed Monday’s practice but is expected to play tonight.

Winger Ville Leino (muscle strain) didn’t skate Monday and will miss a few days. The injury isn’t related to the hip problem that sidelined Leino much of the season, Rolston said.

Did center Cody Hodgson, who was demoted from the first line to the fourth Sunday for poor defensive play, get the message?

“Yeah, it’s a work in progress,” Rolston said. “Cody’s a young player. I think Cody’s been really exceptional for us this year with the position he put in on the team as a young player and the responsibility that get and the role he’s in. It’s just part of the process of him to develop his overall game more than anything.”

Hodgson, whose 12 goals and 28 points rank second behind Vanek, played most of Sunday between Patrick Kaleta and John Scott, who have zero points this season.

Ryan Miller’s next appearance will be his 492nd, the all-time franchise for a goalie. Miller tied Dominik Hasek on Sunday.