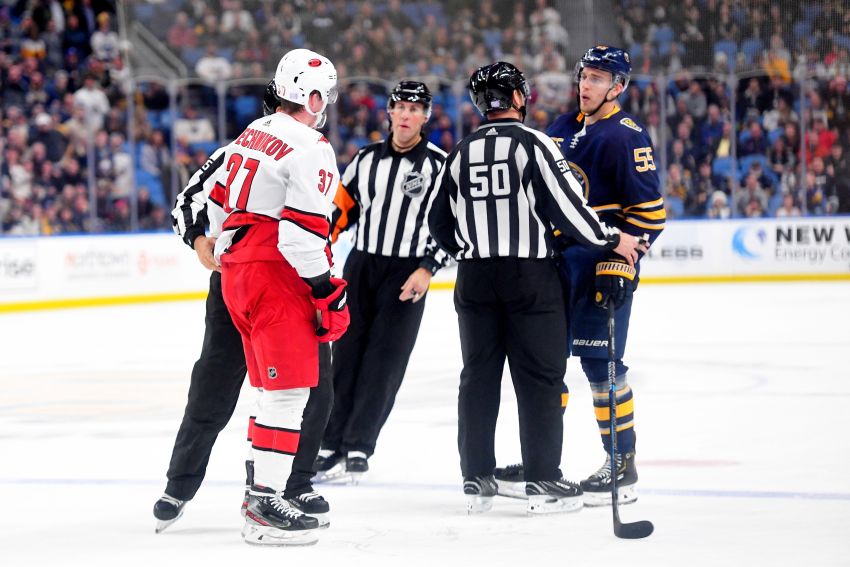 BUFFALO – Maybe Thursday’s 5-4 overtime loss, a rollicking game in which the Sabres roared back multiple times, can help them recapture some of their early-season form.

The Sabres looked dead at several points, including with 3:54 left, when winger Andrei Svechnikov’s power-play goal restored the Carolina Hurricanes’ lead after they had blown a 3-1 advantage.

Instead of wilting, the Sabres scored with 40.1 seconds left, getting the tying goal from center Johan Larsson.

While defenseman Dougie Hamilton’s goal secured the Sabres’ sixth straight loss (0-4-2), at least they can find solace in earning one point for reaching overtime.

“The character of coming back from 3-1, at the moment things aren’t exactly going our way, and … getting a late goal four minutes to go and still fighting into overtime, I thought there’s something to take there as far as the fight and the resiliency,” Sabres coach Ralph Krueger said.

Still, the Sabres’ torrid start is fast becoming a distant memory. The same team that finished its October schedule ranked first overall has dropped to 10th in the Eastern Conference.

Sure, it’s still early. But if the Sabres don’t start winning soon, they could get buried in the standings.

“A lot of those games, we’ve been in the majority of them,” Sabres winger Jeff Skinner said. “We just haven’t found a way to make the big play at the right time.”

Skinner made some big plays against the Hurricanes, who have beaten the Sabres 10 straight meetings. He scored in the opening minutes before Larsson redirected his shot past goalie Petr Mrazek late.

Some of the Sabres’ other top players did little or nothing.

Captain Jack Eichel’s most memorable play during more than 25 minutes of ice time was an awful turnover in his own zone. His linemate, winger Sam Reinhart, received a 10-minute misconduct after he left the penalty box following Svechnikov’s goal, ending his night.

Reinhart, who wore an ‘A’ in place of injured center Marcus Johansson, wasn’t pleased he was whistled for high-sticking defenseman Joel Edmunson.

Neither was the announced crowd of 16,603 inside KeyBank Center, which howled the rest of the night.

Following overtime, Sabres defenseman Rasmus Ristolainen earned a game misconduct. Ristolainen, who was tackled by Svechnikov, received an interference penalty in the extra session. Svechnikov, meanwhile, went off for interference.

“Tonight, you’re extremely angry,” Krueger said. “There’s circumstances there we just seemed to be fighting like in overtime, from my perspective, there was a power play there for sure that we should’ve had. …

“But you’ve got to earn it yourself. We’re not going to look at anything to blame.”

“We’re a team in learning here and we need to focus on what we can change and not what decisions are being made by referees,” Krueger said. “During the game, it’s a waste of energy. We’ll make sure we get that better under control.”

The Sabres had a chance to control the game early. After Skinner’s goal, they blew three power plays.

After a scorching start this season, the Sabres have converted just two of 20 power-play opportunities over the last eight games.

“We need to go further back in the game to understand why we didn’t generate more in the first 30 minutes,” Krueger said. “That definitely is the root cause of the loss today.”

“Curtis’ goal gave us a real spark, where you could see the energy surge back and we started skating, playing the game we wanted to play,” Krueger said.

“That’s part of my identity, that’s what I try to do,” said Lazar, who started the play by blocking a shot. “If it’s running someone over with a hit or blocking a shot or putting a puck in the net or a combination, that’s what I’m going to try to do. I thought for 30 minutes we were kind of on our heels a little bit, then we started to get going.”

Lazar’s goal helped the Sabres start attacking, putting the Hurricanes on their heels.

Sabres defenseman Henri Jokiharju tied it at 3 13:15 into the third period, capitalizing in the slot after defenseman Brett Pesce turned the puck over.

One thought on “Sabres roar back against Hurricanes, lose game and cool”