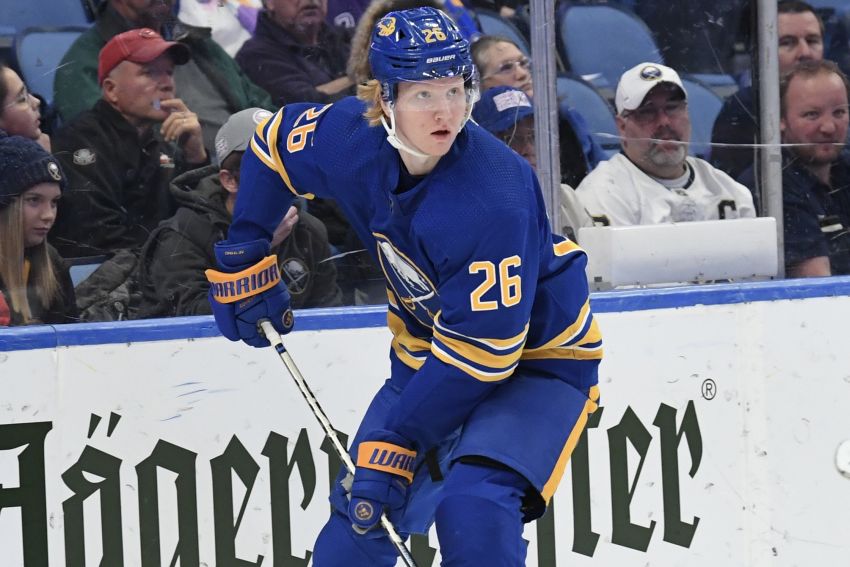 BUFFALO – The challenge of living up to the lofty expectations thrust upon him as a No. 1 overall pick has often been difficult for Sabres defenseman Rasmus Dahlin to handle.

Dahlin, 21, wasn’t just the first youngster drafted in 2018; he was anointed a generational talent. The pressure that accompanies that label can be stifling.

“He’s not compared to another defenseman in the league; he’s compared to the absolute best defensemen in the league with no experience,” Sabres coach Don Granato said following Tuesday’s practice inside KeyBank Center. “That’s when he entered the league. And that’s a challenge for him.”

Even as a rookie, Granato said Dahlin could “impose his will and skill on the opponent.” The Swede was that good. But these days, when Dahlin gets frustrated, Granato said he still tries to overwhelm the opposition with his talent. He hasn’t adjusted properly.

“If an experienced player in this league isn’t feeling it, they adjust their game,” Granato said. “They know, OK, I don’t have legs, I’m tired, I got a sore shoulder, I need to tweak my game. When he gets frustrated, he doesn’t tweak his game, he forces things, he presses.”

To wit: Granato said Dahlin pressed late in the first period of Monday’s 7-4 loss when he gave away the puck to Brandon Tanev inside the Seattle Kraken blue line on the power play. Having fallen down behind his net and lost the puck before Carson Soucy scored a short-handed goal earlier in the period, Dahlin wanted to make amends.

So instead of making the simple play and dishing the puck to teammate Victor Olofsson, Dahlin gave it away. Dahlin got caught flat-footed and Tanev scored the Kraken’s second short-handed goal.

“He does it over and over. But again, he wanted to take it and say, ‘I can correct, I can make up for my last mistake.’ And he pressed then.”

Dahlin, who signed a three-year, $18 million contract before the season, was blunt in his assessment of his performance against the Kraken.

“Not good,” said Dahlin, who recorded his 100th NHL assist Monday. “Two goals in the beginning there and it’s my fault. That just can’t happen. Bad start, I tried to get back to my game. (Stuff) happens but that can’t happen in the future. I will make sure it’s not going to happen.”

He added: “You’ve just got to go back to simple stuff. It’s a battle, mental battle, but it’s a learning process. I, for sure, learned a couple things from last night.”

Dahlin said after Soucy scored, he should’ve cleared his mind.

“Just go back to playing my game, have the confidence to play how I can play,” he said. “Not think too much.”

Despite taking Monday’s gaffes hard, Granato has often cited Dahlin’s growing maturity and explained how he responds to mistakes better than in the past. Instead of carrying them with him, he usually moves on.

And while Dahlin made the wrong move before Tanev scored, he has regularly been opting for the safe choice. To Dahlin, making the simple play showcases his growth.

“If you have tired legs or whatever, just chip the puck out, go change and let the other players do a good job,” he said.

He added: “It’s a learning process, for sure. You’ve got to take pride and play simple and make the right decision and do what’s best for the team when you play a lot of minutes.”

Dahlin leads the Sabres in ice time through 22 games this season, having averaged 23 minutes, 17 seconds. He skated 25 minutes, 56 seconds Monday, his third-highest total of 2021-22. With defensemen Rasmus Ristolainen now playing for the Philadelphia Flyers, Dahlin has absorbed some of the workhorse’s minutes.

Granato doesn’t want poor defensive outings like Monday’s to overshadow Dahlin’s development. He’s only 219 games into his NHL career, a neophyte. In the two contests prior to Monday’s, Granato said Dahlin “did some amazing things and exceptional things.”

“He showed brilliance at times,” he said. “It’s consistency we’re talking about. Look at all the makings of it, entering the league at his age. You’re not going to get veteran consistency yet. He’s not there yet, and we have to allow him that time and that experience.

“So I say all of this, but he’s going to be an exceptional hockey player. He already is. But it’s just we want more of the exceptional more of the time, and unfortunately for him, he’s in a situation where our team needs that. So when there is a mistake, we don’t overcome it. If we win the game 5-4, we’re not having any conversation on this or very little conversation on this because we have the ability to overcome mistakes. And we’re getting to that point, we’re going that direction anyway.”