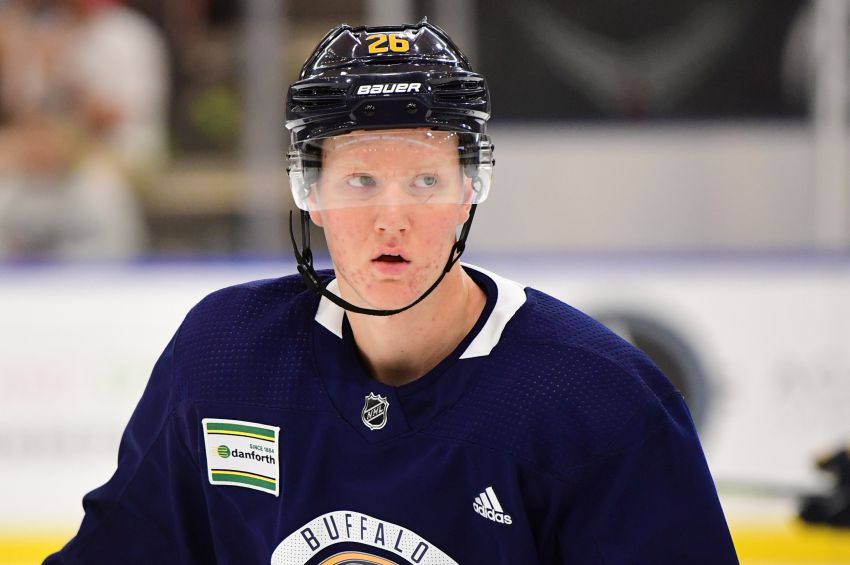 A lot of expectations accompany Rasmus Dahlin’s arrival in the NHL. ©2018, Hickling Images

BUFFALO – Long before the Sabres drafted Rasmus Dahlin first overall in June, he possessed more skill than most NHL players.

The Swede, 18, has been called the best defense prospect in decades. If rules allowed it, he probably could’ve thrived in the NHL even a year ago.

So Dahlin, who will make his long-awaited NHL debut tonight against the Boston Bruins in the season opener at KeyBank Center, will likely immediately contribute to the Sabres.

“Right now, (I’m) just excited,” Dahlin said Wednesday of his first NHL game. “I’ve been waiting for this my whole life. It’s (the) NHL and that’s the biggest thing I can do.”

The high expectations for the rookie should probably be tempered a bit, at least early on. Dahlin, after all, is just a kid. Nearly everyone he faces this season will have much more NHL experience.

For example, in a preseason tilt against the Toronto Maple Leafs, 535-goal scorer Patrick Marleau, 39, stripped the puck from Dahlin at the blue line and zoomed off on a breakaway.

Housley expects Dahlin to shake off any jitters early and feel comfortable.

“Rasmus hasn’t been in a lot of difficult situations in his young career,” Housley said. “It’s going to be those first two or three shifts, you’re going to struggle to breath. It’s going to be exciting. I have confidence he’ll settle in.”

In the opening games of Dahlin’s career, Housley said he simply wants the youngster to keep everything simple.

“Let his talent and his instincts take over,” Housley said. “This is an instinctive game. Just make the simple plays, keep it simple. I think he’s doing a terrific job working with (assistant coach) Steve Smith with his defensive zone reads, he’s learning that part of the game.”

After spending just a few weeks with him, Dahlin’s new teammates are confident he’ll enjoy a successful career.

“Just through our skates that we had early on, you could tell that he was a great skater, great puck handler and you could tell he was going to have all the tools to be a successful D-man,” Sabres winger Jason Pominville said. “He’s still a kid, it’s crazy.”

Dahlin will be paired with defenseman Jake McCabe tonight.

Housley said defenseman Zach Bogosian, who’s day-to-day with a lower-body injury, skated on his own Wednesday. He doesn’t know when the veteran could start practicing.

The Sabres eased Bogosian into training camp, keeping him out of some practices early. He was hurt Sept. 25 in a 4-2 preseason loss to the Columbus Blue Jackets.

Housley on Remi Elie, a winger the Sabres claimed on waivers from the Dallas Stars on Tuesday: “I’m excited about Elie. He’s a tenacious forechecker, he can get on the forecheck, he finishes checks.”

Elie practiced Wednesday as a spare forward. He will likely be a fourth-liner when he plays.

While Elie only has seven goals and 21 points in his 90-game NHL career, Housley believes he could provide some secondary scoring.