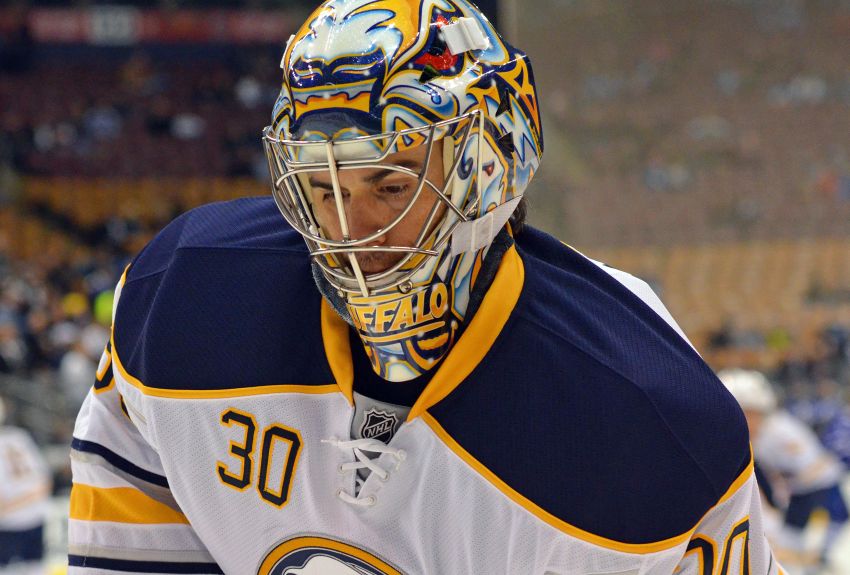 Still, it only translated to a single point they earned in Wednesday’s 4-3 shootout loss to the Maple Leafs before 19,372 fans inside the Air Canada Centre.

To interim coach Ted Nolan, the Sabres fought for a tough road point.

“Third game in four nights, on the road being down a goal going into the third period,” Nolan said. “I thought our third period was our best period.”

Cody Hodgson’s power-play goal, the center’s second score in two nights, tied it 43 seconds into the third period. Nineteen saves from Ryan Miller in the final 25 minutes and a big penalty kill in overtime helped the Sabres reach the shootout.

But Miller was uncharacteristically awful during the one-on-one competition, allowing all three Leafs to score.

“Unfortunately, I wasn’t very good in the shootout,” Miller said. “That’s the difference.”

Remember, Miller sports a glitzy 49-29 career shootout record and was 6-1 this season, stopping 25 of his 31 attempts.

“I didn’t have good positioning on any of those,” Miller said.

Miller, who made 36 saves, got a piece of Bozak’s winning shot, but the puck trickled across the goal line.

“I still don’t know how it went in,” said Miller, who was temporarily bailed out by Matt Moulson’s shootout goal.

The Sabres played better against the Leafs in than Tuesday’s 4-3 home loss to Philadelphia, a game they allowed three late goals.

“We kind of started that party with a turnover in the first and getting down,” Miller said. “Otherwise, we were playing pretty good hockey considering it’s back-to-back. We were playing a little bit smarter. We broke first. We had to battle back.”

Miller added: “He made a nice shot. I didn’t see. Good for Phil, get him going for the Olympics, I guess.”

Matt Ellis tied it 3:21 into the second period, connecting on Tyler Myers’ pass at the bottom of the left circle.

After rookie Zemgus Girgensons missed a penalty shot, Moulson put the Sabres up 2-1 at 6:34, beating James Reimer from the left circle over the goalie’s right shoulder. Replays showed the puck might’ve never crossed the line, though.

The lead was short-lived.

Nikolai Kulemin tied it at 7:23 from the left circle, leaving Miller sarcastically applauding an official who had kept the play going after the puck hit his skate.

Kulemin has scored three of his six goals this season against Buffalo.

Then Morgan Reilly put the Leafs up 3-2 from the bottom of the right circle at 11:22.

“We had some real good leadership again from Steve Ott and really willed this team back,” Nolan said. “I thought Girgensons was outstanding tonight.”

Girgensons recorded 13 hits Wednesday, more than anyone else this season.

The Sabres lost winger Matt D’Agostini (upper body), who left in the first period after only playing 2:19.

“Looks like it’s going to be a little while,” Nolan said about D’Agostini’s status.