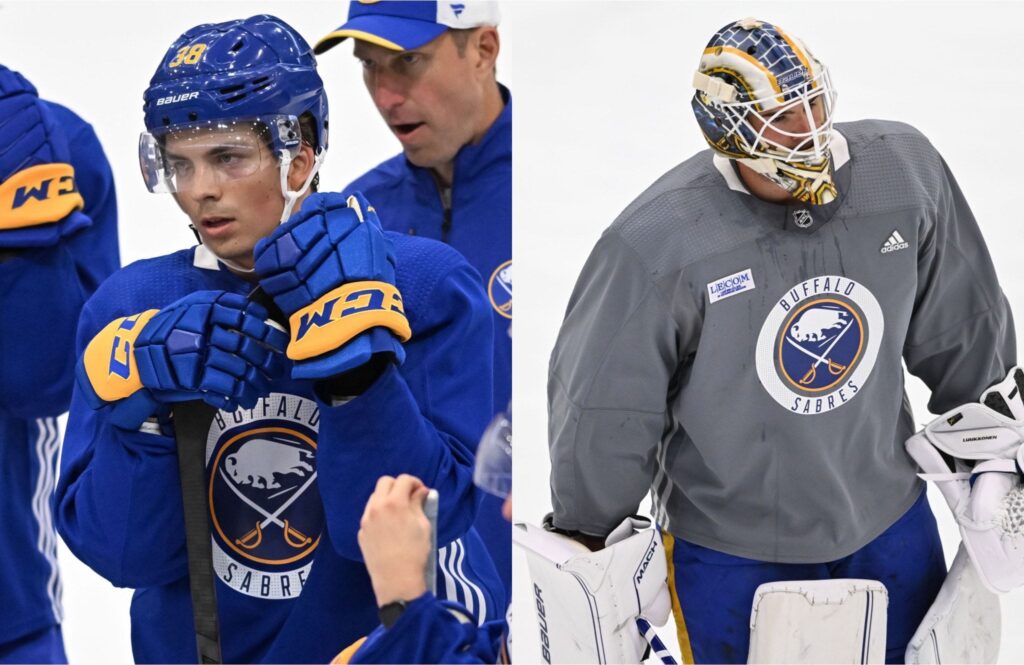 BUFFALO – Right now, Ryan Johnson acknowledged he’s leaning toward returning to Minnesota for his senior season. Still, the defense prospect hasn’t ruled out turning pro. He plans to use this week’s development camp to evaluate the Sabres.

“I could kind of see where the organization is,” said Johnson, a first-round pick in 2019, 31st overall.

Johnson, who turns 21 on July 24, said if he goes back to college, he could eventually sign with the Sabres.

“I love the organization,” Johnson said Wednesday following the first session of camp inside LECOM Harborcenter. “It doesn’t close the door.”

Of course, next year, Johnson, who was drafted by ex-Sabres general manager Jason Botterill, can become an unrestricted free agent if he chooses not to sign with Buffalo.

“That’s something I usually don’t think about, others have been brought up to me,” Johnson said of the possibility of hitting the open market. “I don’t really think about that too much. My goal is to sign eventually.”

The Sabres met with Johnson’s representatives last week at the NHL Draft in Montreal. The sides plan to talk again following camp. Johnson wants to make a decision after that.

Meanwhile, Sabres goalie prospect Erik Portillo, 21, is also a year away from becoming a free agent.

Portillo, who’s participating in camp, has already committed to returning to Michigan for his junior season.

The Swede said an opportunity to study at Ross Business School and perhaps play 40 games for the Wolverines were factors in his decision.

Portillo, the 67th pick in 2019, said he knows his uncertain future has been discussed in the media.

“But I’m just trying to do my best and deliver really well (for) Michigan here next year, and that’s all I can do right now,” he said.

If Portillo signs with the Sabres, he will likely have to battle for playing time in the organization. They have three other goalie prospects 23 or under: Ukko-Pekka Luukkonen, Devon Levi and Topias Leinonen.

“That’s how it’s going to be in every organization in the NHL, you’re going to play against the best all the time,” Portillo said. “If you want to play in the NHL, you got to beat the best.”

The 6-foot-6 Portillo practiced Wednesday wearing equipment he said the Sabres “found in the back.” He lost all three bags of his gear in London en route to Buffalo.

“It was tough,” Portillo said of the equipment he sported Wednesday. “New skates, new pads, new everything – a little smaller, too. So just had to grind through it.”

He said his equipment had made it to Philadelphia by Wednesday morning.

Adams reiterated on Wednesday the Sabres want re-sign defenseman Lawrence Pilut when they have proof his contract with Chelyabinsk Traktor has been voided.

“There has been a document that has been produced,” Adams said. “Now there’s conversations with the NHLPA and the NHL going on to make sure that it’s valid. …

“The takeaway is we’d love to have him, we’d love to sign him, and we just have to make sure it’s all above board and clean and then we will do it.”

Pilut, 26, played 46 games with the Sabres over a two-year stretch before bolting to the Kontinental Hockey League following the 2019-20 season.

The Swede starred for the Rochester Americans after arriving in North America in 2018, compiling 10 goals and 49 points in 67 games.

He could be ticketed for Rochester again. The Amerks should have an experienced blue line this season. The Sabres on Wednesday signed three defensemen – Kale Clague, Jeremy Davies and Chase Priskie – to one-year, two-way contracts shortly after free agency opened.

Adams said Sabres forward prospect Aleksandr Kisakov, who recently signed his entry-level contract, is “getting closer” to coming to Buffalo.

Kisakov, 19, is in Canada and attended the NHL Draft last week. The visa process is holding up the Russian’s entry into the United States.

“Canada’s closer than where he was before,” Adams said. “I give this kid so much credit. I mean. he wants to be here so bad, he’s doing everything he can. Waiting on paperwork, and he had to get to there and Ottawa, and he’s got to spend a few days in Ottawa.

“But all indications are he’ll be allowed in the U.S. fairly soon. I don’t think it’ll happen in the next few days for development camp.”