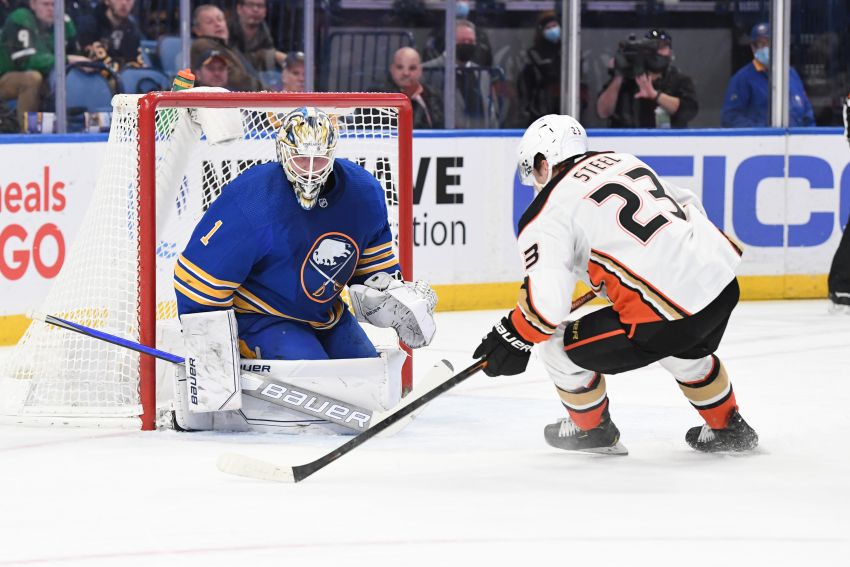 BUFFALO – After an 11-day layoff, goalie Ukko-Pekka Luukkonen looked sharp against the Anaheim Ducks in his first NHL action this season. The rest of the Sabres, meanwhile, clamped down, limiting chances following a slew of dreadful defensive efforts.

The end result, however, was their fifth consecutive loss. The Sabres, who have consistently been scoring goals, generated little offense for the first 40 minutes of Tuesday’s 2-0 loss.

The Ducks only needed Sonny Milano’s goal 5:14 into the second period, which will almost certainly be replayed on highlight reels for years to come, to secure their 14th victory this season. More on Milano’s goal, which Trevor Zegras set up from behind the net, later.

“We looked a little lethargic,” coach Don Granato said of the Sabres’ offensive effort. “You can only guess why and we’re going to try to figure that out ourselves on the coaching side, because we … didn’t look like ourselves and didn’t play with the pace that we typically do.”

To make matters worse, center Casey Mittelstadt, one of the Sabres’ top offensive threats, left the game with just under 14 minutes left in the third period.

Granato had no update on Mittelstadt, who returned last week from an upper-body injury that sidelined him 21 games.

“I’d like to be optimistic about it,” he said. “It’s not a reinjury of what he had, from what I understand at this point. So we’ll know more in the morning. But we’re hopeful knowing it wasn’t a reinjury it’ll be something short.”

The good news is Luukkonen, one of hockey’s best netminding prospects, confidently backstopped the Sabres in the midst of a goaltending crisis.

Right now, Craig Anderson (upper body), Malcolm Subban (undisclosed) and Dustin Tokarski (COVID-19 protocol) are all out. The Sabres needed someone to step up. Luukkonen, who made 21 saves in his fifth NHL start, responded.

“UPL looked good, looked comfortable,” Granato said. “I thought we helped him out a bit more than we had been lately. It was nice to see him feel good, look good. But obviously no support on the scoring end was the difference. It made it tough.”

Luukkonen said: “The guys played really well in front of me today, so that made it easier. I didn’t feel rusty at all.”

More than 25 minutes into a drab affair, Milano’s goal stunned Luukkonen and the crowd of 8,133 fans inside KeyBank Center.

Stationed behind the net with little pressure, Zegras said he heard Milano yelling “Michigan” to him. That was a reference Mike Legg’s goal in the 1996 NCAA Tournament in which he lifted the puck up on his stick blade and quickly wrapped it around lacrosse style.

Zegras lifted the puck up but decided to flip it in front to Milano, who batted it by Luukkonen.

“I was sold on the pass,” Zegras said. “Once I heard him yell ‘Michigan’ to me, I kind of wanted to get it to him. I still can’t believe it worked. It’s pretty funny, I’ve tried it a couple of times and haven’t even come close. For him to whack it out of the air and keep it under the crossbar is pretty incredible.”

Milano said: “I expected him to do the Michigan himself before I even called for it He wasn’t, so I was just like, just do it. I was like, ‘Michigan, Michigan’ and he ended up just throwing it to me and I batted it in.”

When the goal was replayed on the video boards, the crowd oohed.

Luukkonen said it was the first time he’s seen the move.

“You don’t expect that,” he said. “If they make the play, it’s a nice goal in the end, but you don’t see that that often. There’s not much else I can say about it.”

Sabres winger Rasmus Asplund, who was behind Milano, said he did not see Zegras pick up the puck.

“It’s a high-skilled play from a skilled player,” he said. “You don’t see that very often, so it’s not easy to be ready for, either.”