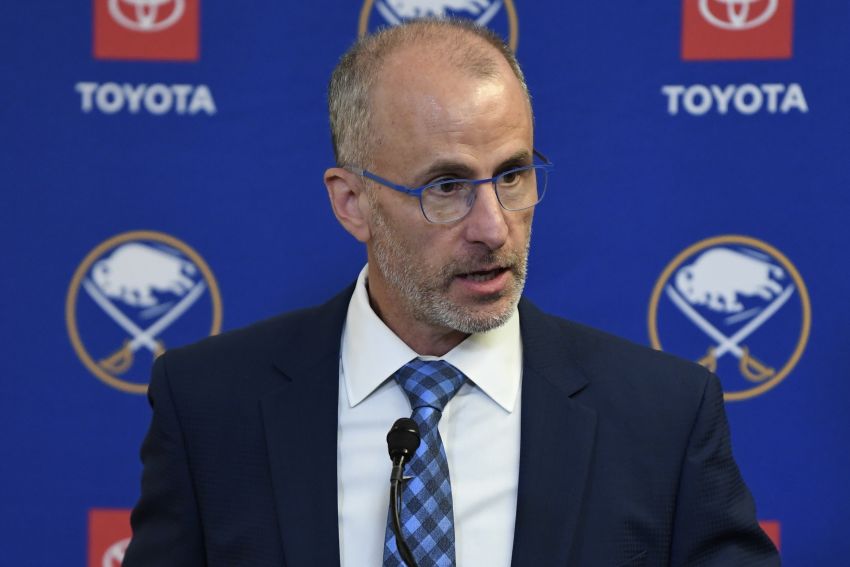 Don Granato’s Saturday began in the predawn hours in Buffalo. The coach knew he was close to clearing the NHL’s COVID-19 protocol. So receiving good test results meant he join the Sabres in Boston for their matinee.

“I was waiting literally minute by minute in hopes of being here,” Granato said on a Zoom call prior to the Sabres’ 4-3 overtime loss to the Bruins at TD Garden.

When Granato received clearance, he hopped on a morning flight and made it to Boston in time for the Sabres’ 1:08 p.m. faceoff.

Granato, 54, acknowledged he was “very concerned” when he learned he tested positive last Sunday. He has a history of health problems, having beaten cancer earlier in his coaching career and been hospitalized with severe pneumonia in 2019.

“Having experienced some things that I don’t want to experience, I was very grateful, you hear the word ‘COVID,’ you see a positive test, your mind can go places that you don’t want it to,” Granato said. “I did my best to not let it go there.”

Granato remained asymptomatic and said he “felt good all the way through” his two-game absence.

“I’ve said that the symptoms I had the morning and last day I took the vaccine was much more severe than what I experienced through this,” Granato said. “I basically didn’t feel much. I was just maybe a little lethargic maybe for a day and then ready to go. So I’m pretty excited to be back and extremely excited to bring forward I feel very, very sure the vaccination did its work for me.”

“In my 2,000 games of being a head coach, I can tell you there’s elements there that were really challenging,” Granato said. “You threw that many new players in the lineup, it’s going to be tough. And then that many players that haven’t had experience. You had multiple guys with first games, second game played. There’s no continuity, and then you had no practice time. So not only do you have no practice, you’re not feeling good as a group. So very difficult circumstances.

“I thought the standard that we want to play by was upheld by our players, our leadership there, and certainly by Ellie and our coaches.”

Granato felt he left his coaches in a tough spot. He said video coaches Myles Fee and Justin White entered protocol have been working remotely.

On Zoom calls during intermissions, Granato said he and the video coaches would try to support the assistants.

“And not interfere with the feel they had on the bench, the energy, emotion, those sorts of things,” Granato said. “We tried to be as supportive as we could. It was enough there that I didn’t have any frustration. Certainly in the game I was engaged to do what I could to chip in.”

In addition to Fee and White, the Sabres have four players – defenseman Jacob Bryson and forwards Dylan Cozens, Zemgus Girgensons and Mark Jankowski – in protocol.

Wingers Vinnie Hinostroza and Jeff Skinner left protocol Friday and played against the Bruins, each scoring a goal.

The Sabres opened a 3-1 lead Saturday before the Bruins, who hadn’t played since Dec. 16 because of COVID problems, roared back in the third period. Nick Foligno scored 3:24 before ex-Sabres Taylor Hall tied it at 4:49.

“(We) had the lead through 40 minutes, which I felt was really a positive for our group,” said winger Alex Tuch, whose power-play goal 19: 11 into the second period put the Sabres up 3-1. “The way we handled it in the third was not positive. We know what it takes to win games and I don’t think we’ve been able to show it lately, but having a lead – great teams know how to win with a lead. They know how to finish the game off.

“We’re still a young core. We’re still gonna learn from one more experience. Tonight was another step in the right direction but we can learn from this loss and we got a point out of it, which is always a positive in this league. But, you know what, it was one that we let get away, for sure.”