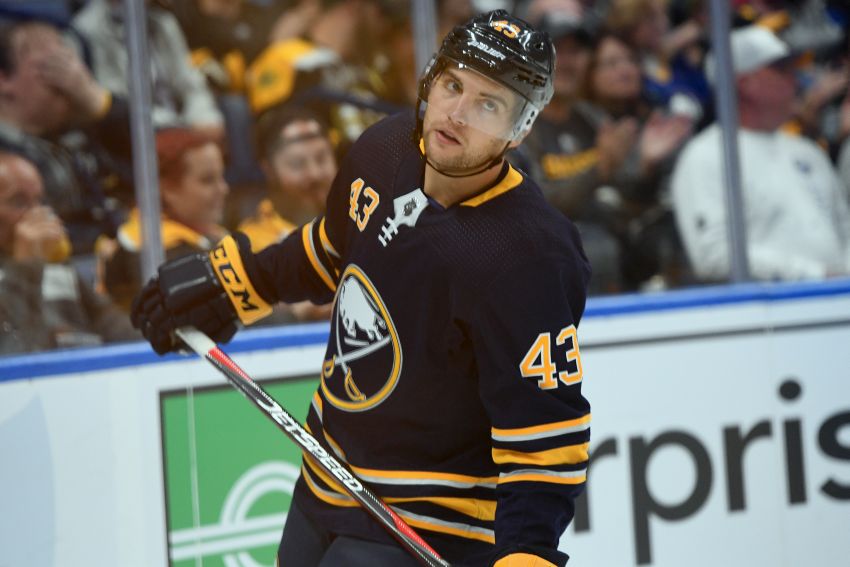 Conor Sheary has been a welcome addition to the Sabres. ©2018, Micheline Veluvolu

“I didn’t have any offers, really,” the speedy Buffalo Sabres winger said prior to Monday’s 5-4 come-from-behind overtime win against the Penguins inside PPG Paints Arena. “Pittsburgh was the only offer I had.”

Sheary, 26, said he would feel some nerves Monday. He packed a lot into three seasons with the Penguins, winning two Stanley Cups, playing 57 playoff games and scoring 48 regular-season goals. In 2016-17, Sheary spent most of the season as superstar Sidney Crosby’s linemate, scoring a career-high 23 goals in only 61 contests.

“I think you’re not going to be happy when you get traded,” Sheary said. “It kind of feels like a team is saying they don’t want you anymore. I was really lucky to get a good opportunity with Buffalo, a team that did want me.”

So far, Sheary has fit in well with Buffalo, scoring six goals and 11 points in his first 21 games while offering “speed and tenacity on the forecheck,” coach Phil Housley said.

Sheary received a loud ovation when the Penguins honored him with a tribute video during a break in the first period. He later had an assist.

Housley, who said he put rookie Rasmus Dahlin and Zach Bogosian together for “balance” Saturday, kept the defense pair intact.

Since leaving Buffalo after the 2016-17 season, Grant, 28, has made 75 NHL appearances. He spent all of last season with the Anaheim Ducks, playing 66 games and scoring his first 12 NHL goals.

Grant endured an odd season with the Sabres, making the team out of training camp before the Nashville Predators claimed him on waivers.

The Sabres then reclaimed him weeks later. In 46 games between the two clubs, Grant scored zero goals. He ended the season with the Rochester Americans.

“It was a bit of a whirlwind year, for sure, but I had a lot of fun with it,” Grant said.

Notes: Winger Jason Pominville tied Rick Martin on Monday for ninth place on the Sabres’ all-time games list with his 681st appearance. … The Sabres scratched defenseman Nathan Beaulieu and forwards Remi Elie and Evan Rodrigues. … Monday was Sabres winger Jeff Skinner’s 600th NHL game. … The Penguins have hired Craig Patrick, their general manager when they won Cups in 1991 and 1992, as a pro scout, the team announced Monday. Patrick briefly served as a special assistant and advisor to the hockey department for the Sabres several years ago.