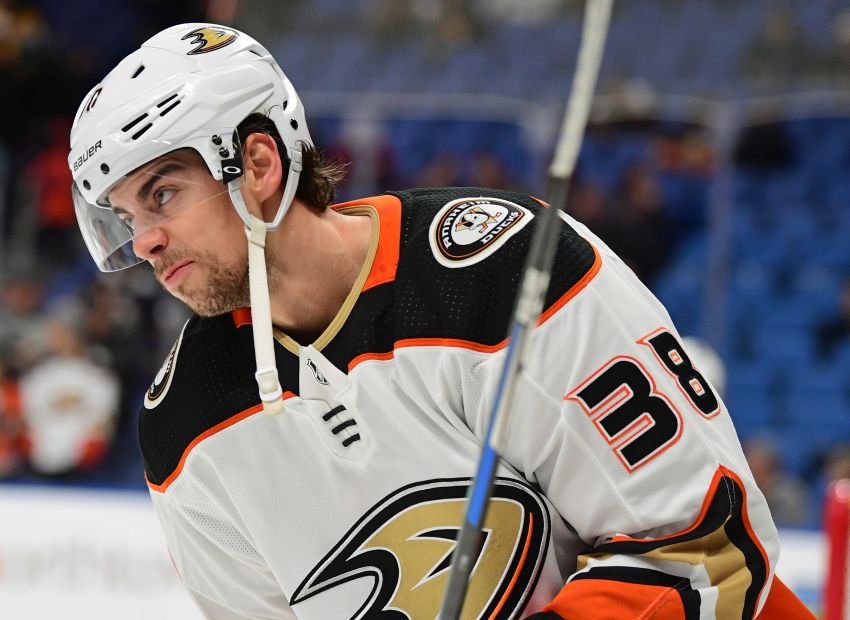 “Finally getting one that counted was a big step for me, and I think it jumpstarted me into being able to do it again,” Grant said Tuesday inside KeyBank Center.

Buoyed by that confidence and an opportunity to play big minutes, Grant scored six more goals over the next 32 games.

“After they go in, it’s something you don’t think about anymore,” Grant said.

Grant, an elite AHL scorer, was asked about his inability to produce an NHL goal throughout an odd 2016-17 campaign, his only season with the Sabres.

Thanks to an impressive preseason, the Michigan State product made the Sabres out of training camp, earning regular duty as a fourth-line center and a penalty killer until Nashville claimed him on waivers midway through the season.

During his six-game run with the Predators, Grant, 27, thought he scored his first goal Jan. 17, 2017 against his current teammate, former Sabres goalie Ryan Miller. But replays showed Miller covered the puck.

“That’s tough,” Grant said of not scoring. “That’s something you try not to think too much about but obviously it’s always there.”

The Sabres reclaimed Grant on waivers in February. By the end of the season, he was in the AHL. His final NHL stat line read zero goals and four assists in 46 games.

“It was a good year for me, a good learning experience for me,” Grant said. “The whole waiver thing and getting a chance to play on a different team, for a guy like me, it’s about opportunity. I can see different systems and learn to play different styles.”

Grant signed a one-year, $650,000 contract with the Ducks during the summer because they lost some of their center depth. With top pivots Ryan Getzlaf and Ryan Kesler injured early, Grant skated around 20 minutes some nights.

“It was about opportunity, you get a chance early on in the year, show you can play in camp,” Grant said.

With the Ducks healthy again, Grant has resumed his role as a depth forward. He played Tuesday, however, ending a nine-game absence.

“With guys coming back now, we’re pretty deep down the middle,” he said. “That’s something I just got to stay ready for.”