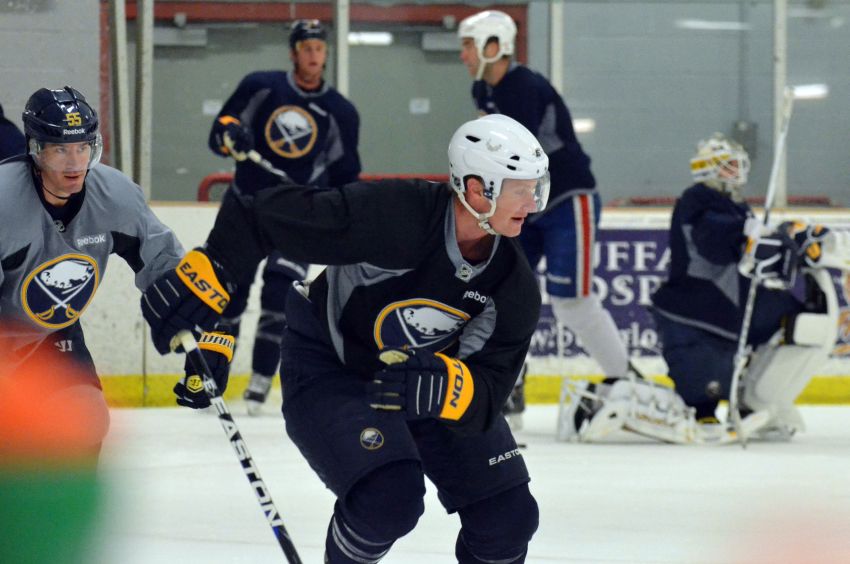 AMHERST – So, what about that vote the NHL Players’ Association is holding this week, the one that would give the union’s executive board the power to file a disclaimer of interest, which would dissolve the NHLPA and allow players to sue the NHL?

“I’m not going to comment on that,” defenseman Jordan Leopold, the Buffalo Sabres’ union representative, said Monday after skating inside the Northtown Center. “That’s all legal matters.”

Yup, legal matters. The courts are now involved in the 94-day NHL lockout.

First, let’s tackle the players’ possible disclaimer, a faster alternative to decertifying. Their five-day voting period runs through Thursday. A two-thirds majority is needed. If the vote passes – and it’s believed it will – the show of solidarity would be huge.

The vote would only give the 30-member board the authority to file a disclaimer, however. It has until Jan. 2 to do so. If it wants file after that, another vote would have to be taken.

“I think we’re really knowledgeable where we are at today,” Leopold said. “Don’s done a great job this whole process keeping us up to date. We’re still bargaining here. We’re hoping we can get a deal here to get us to playing hockey.

Meanwhile, with a possible antitrust suit looming, the NHL on Friday filed a class action suit in federal court in New York, hoping to establish the lockout as legal. The league also filed an unfair labor practice charge with the National Labor Relations Board, saying the NHLPA has bargained in bad faith.

The 43-page federal complaint uses some of the players’ own words against them, including Sabres goalie Ryan Miller’s passionate plea for decertification. It’s no wonder players are tight-lipped about disclaiming.

Could court action speed up collective bargaining negotiations? Right now, no new meetings are planned. But some observers believe the sides would rather negotiate face-to-face instead of through the courts.

“The process is we’re still negotiating here and still waiting to see if the league’s going to respond to our last proposal,” Leopold said, ducking the question a bit. “ … We seem to have this trend where we put a proposal out, and there’s a couple weeks where everything goes real quiet and then there’s some commotion again. Hopefully, we get that commotion.”

On TSN.ca on Monday, Eric Macramalla, the Canadian sport network’s legal analyst, couldn’t say whether the NHL’s lawsuit and the NHLPA’s disclaimer would end the lockout quickly.

“Yes. No. Maybe,” Macramalla wrote. “It’s not unreasonable to share the view that the introduction of antitrust litigation will encourage the sides to settle. The players filing their own lawsuit, which would not be a surprise to see this week, may also result in further pressure to get a deal done.”

Conversely, the NFL Players’ Association disclaimed four months before a deal was reached last year. The league wasn’t playing games then, however.

The NHLPA’s last proposal was two weeks ago, shortly before negotiations imploded inside a New York hotel. Players say they’re still waiting for a fair offer from owners.

“I still feel the same way as the beginning,” Sabres winger Thomas Vanek said. “We as players have given a whole lot, and not much has come back in return. That’s the frustrating part, that the respect level is not there. Hopefully, things can change.”

For Vanek, who also refused to discuss the disclaimer, the dispute’s about much more than money.

“Fans are frustrated,” he said. “They always relate to the player, and probably look at us as being greedy. But I think the people that know more just beyond that really understand what we’re going through. It’s not about greed; it’s just about getting respect and not even getting paid the right way.

“It’s just, let’s have a deal that’s fair for both sides. I believe we don’t have that right now.”