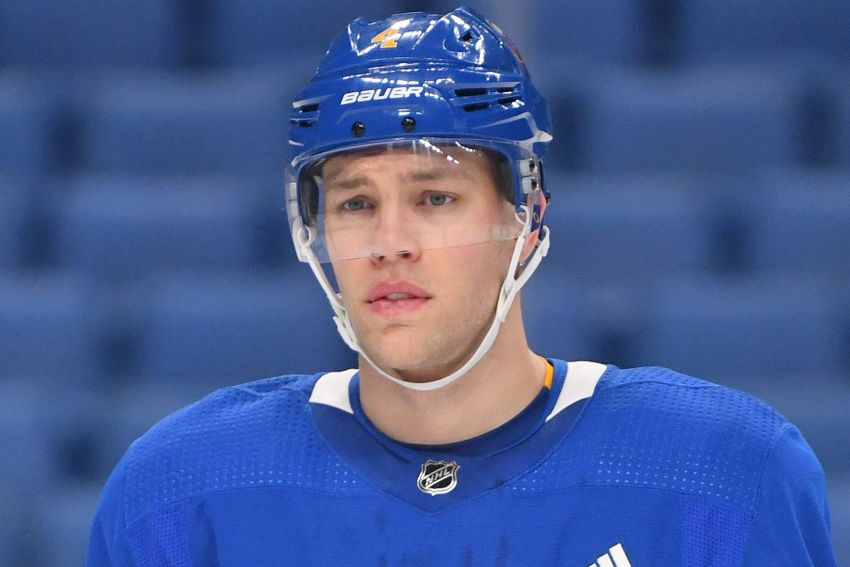 BUFFALO – If Thursday’s disjointed performance against the Washington Capitals turns out to be a harbinger, the Sabres could be in for another long season.

In their highly anticipated season opener, the Sabres, who had six new faces in the lineup, looked like the same old team, losing 6-4 inside KeyBank Center.

If fans had been allowed to attend the game, you can bet they would’ve voiced their frustration a few times.

After a 10-month layoff because of the COVID-19 pandemic, the Sabres, not surprisingly, looked out of sync, especially early. They struggled to defend, played too timid and committed some awful gaffes.

“We expected rust and there was rust, and we expected an adjustment to the physicality and the speed,” Sabres coach Ralph Krueger said on a Zoom call.

Still, the Sabres, who received an early power-play goal from $8 million newcomer Taylor Hall, roared back.

Jake McCabe’s goal 16 seconds into the third period narrowed it to 4-3 and seemingly seized the momentum. Then 26 seconds later, Washington’s Jakub Vrana scored, capitalizing on veteran Eric Staal’s giveaway deep in his own zone.

Staal, who was making his Sabres debut, left the game about halfway through the third period after Washington’s Nic Dowd hit him in the head at center ice. Dowd received only a two-minute penalty.

Krueger had no update on Staal and said the Sabres will know more in the morning. Right now, Staal is day-to-day.

“Quite surprised that a hit to the head gets two minutes but it is what it is and we’re disappointed with that finish stretch there for sure,” Krueger said.

Victor Olofsson scored at 18:06, narrowing the margin to 5-4 before Washington’s Garnet Hathaway scored an empty-net goal.

“You saw in the first 10 minutes both sides there were a lot of turnovers and some sloppy play, which we kind of expected after a 10-month layoff,” McCabe said. “We knew going into a regular-season game was going to be tough, but as the game progressed we found our game and found our legs a little bit better. We started making better plays and executing.”

The outing won’t do anything to dispel the belief the Sabres’ defensemen must defend better to help their suspect goaltending. Carter Hutton, who made 22 saves, received little help much of the night. Still, he never bailed out his teammates by making a huge stop.

Krueger said the defensemen and forwards contributed to the porous defense.

“We weren’t holding up properly early on coming back hard enough to support the defenseman,” he said. “They were exposed at times. It was a group needing a period and a half to really find out what it’s all about again. You can’t simulate this in practice. I’d say all of us as a group just needed an adjustment period. The result isn’t pleasing but we saw how we needed to play at the end.”

He added: “Our defensive game needs to take away the gaps and we need to attack quicker. I thought we were a little bit soft defensively as a group. We kind of fell back.”

Hall said: “Our puck management wasn’t doing us any favors all night.”

One thought on “Sabres look rusty early, fall to Capitals in season opener after late comeback”