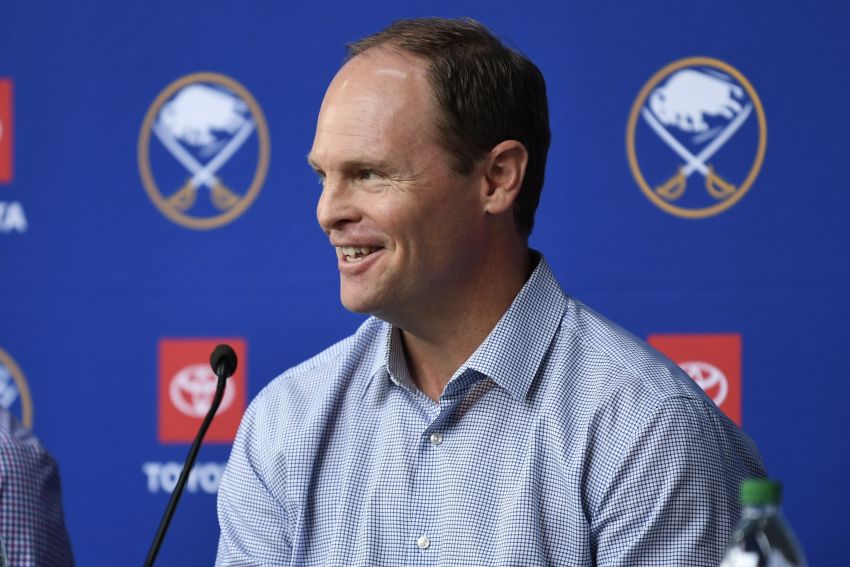 Kevyn Adams has a plan to find a goalie. ©2022, Micheline Veluvolu

MONTREAL – The assets available in the crowded goalie market keep dwindling every day.

Two more netminders were traded Friday at the NHL Draft, as the St. Louis Blues dealt Ville Husso to the Detroit Red Wings and the Washington Capitals dished Vitek Vanecek to the New Jersey Devils.

The Sabres, who must add another established goalie, have limited options. They tried to acquire Matt Murray from the Ottawa Senators on Thursday, but the two-time Stanley Cup winner had Buffalo on his 10-team no-trade list, according to reports.

Right now, the Sabres have just one established goalie, Craig Anderson, under contract.

But don’t expect general manager Kevyn Adams to make an impulse move to find another goalie. He has a plan he refuses to stray from.

The Sabres have some goalie prospects in the pipeline, including Ukko-Pekka Luukkonen, a restricted free agent.

“I’ve had a lot of discussions with teams about different options, things that we think about, and then you kind of go through that list and check it off,” Adams said Friday after the draft ended inside the Bell Centre. “And maybe some conversations pick up a little bit more, some go away. We’ve had that, we’ll continue to have that. And we’ll look at, we know there’s options available. …

“But what we won’t do is panic. We will do what we believe is right for this organization, short- and long-term, and we’ll be patient and calm and we’ll do the right thing.”

Adams understands it can be easy to become emotional and “make quick decisions.”

“I don’t think that’s how we want to run our business,” he said. “I think we want to be disciplined with what we do.”

Free agency, of course, begins Wednesday, so the Sabres could find someone on the open market. Last year, they signed Anderson and Aaron Dell late in the first day of free agency.

Adams feels comfortable having Anderson, 41, back in the fold. The American signed a one-year, $1.5 million contract last month.

“It was a critical piece for me to get him back with our group, not just for how he performs on the ice, but what he does every day in the locker room,” Adams said. “We feel comfortable with where he’s at from a health standpoint.”

Jerry Forton, the Sabres’ director of amateur scouting, became emotional when he was asked a question about working with Adams on the draft floor for the first time.

“You know what I love about Kevyn, is he’s so level-headed,” said Forton, who joined the Sabres in 2013 as an assistant coach.

Then Forton broke down. He paused for 40 seconds before apologizing and resuming his response with tears in his eyes.

“To see the coaches and the development staff and the Rochester staff and all our support staff, how everyone works together, to me that all starts with the Pegulas and Kevyn. …

“But he was great on the floor. He was always professional and he includes everyone. He’s respectful. And he has a lot on his plate managing that many people. And he does it with dignity and professionalism.”

Sabres co-owner and president Kim Pegula is recovering from a recent health issue.

Adams said he met with representatives for Ryan Johnson on Thursday and the defense prospect will attend development camp next week.

Johnson, the 31st overall pick in 2019, can become an unrestricted free agent next year if the Sabres don’t sign him. Adams has said the American is “leaning” toward returning to Minnesota for his senior season.

“We agreed to kind of circle up right after development camp and just have the next discussion,” Adams said. “Does that mean he makes a step and turns pro potentially, or goes back to school? But we decided to spend a little time during development camp together, and then we’ll see from then.”

Portillo, who has said he’ll return to Michigan for his junior season, can also become a free agent next year.

“His preference is to go back to school,” Adams said. “… I don’t think anything’s going to change there. But we’re looking forward to seeing him next week.”

The Sabres on Friday re-signed forward Brandon Biro to a two-year, $1.525 million contract.

He’s the first restricted free agent the Sabres have locked up.

Biro, 24, played one game for the Sabres last season, going pointless in his NHL debut Feb. 23 in Montreal.

The Sabres’ old regime signed Biro as a free agent out of Penn State in 2020. He made his pro debut in 2020-21, recording two goals and five points in 15 games with the Amerks.

The San Jose Sharks on Friday drafted Lake View’s Joey Muldowney, a forward, in the sixth round, 172nd overall.